Ok, let's talk about cutting and pattern placement.  Cutting glass is always dicey but there are things you can do to make the odds be ever in your favor.  A straight cut is the easiest cut to make and if you can make a nice even score the odds are instantly stacked in you favor for it to break correctly 99 times out of 100.  On the other hand, a deep curve that cuts into the piece you are trying to save is the hardest kind of cut you can make.  So what can we do to make things easier for ourselves?  The answer is easy; leave yourself some extra glass behind your deep cuts to give the piece strength and support.  Take a look at the pattern piece below and note that there are two areas where the curves come dangerously close to the edge.

Placing the pattern on your glass as shown in the picture below gives you a nice straight line for the bottom but unless you're a glass professional you'll most likely break your piece when you try to scoop out those deep curves.  See the (small) green lines at the bottom of the two curves?  If we had some more glass behind them the glass would be much sturdier and less likely to break.  So the question becomes, what can we do to give our piece some added strength? 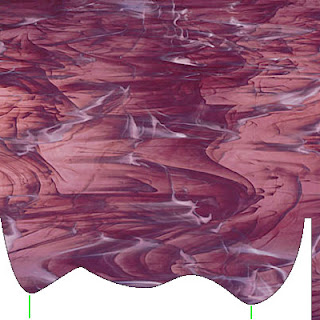 The answer is actually very simple.  Just position the pattern on the glass as you see below.  Notice how long the green lines are under the curves now.  I'm not saying that you won't ever break this piece while cutting it this way, but the odds are more with you now than against you.  But remember that you should NOT cut the straight line first! If you do you are back in the same position you were in when we showed you the second picture.  Always handle all of your tough curves before you make your simple cuts and you'll save a lot of time and a lot of glass. 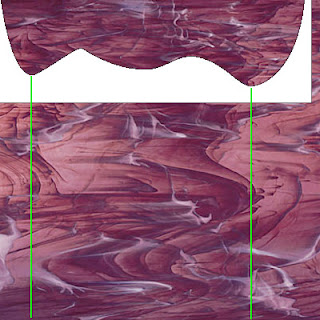 So, Rowena is back and as you can see she wasn't just sitting home doing nothing while she was away-- she was busy completing this Baseball Window for Kyle.  As I was checking it over Rowena kept apologizing for her bad soldering which I didn't see at all.  So when I went to flip it over I got worried for a second until I saw how wonderful the second side looked as well.  All I did was tack on the Zinc Channel, drill some holes for hooks, and this was perfect!  If everyone soldered nearly as well as Rowena I wouldn't have a job anymore! 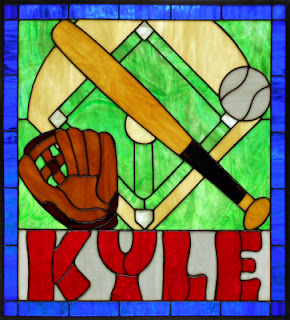 Carol's Teddy Bear Window has a very similar story.  We have a few students out there that think they don't know how to solder when they actually solder beautifully.  There's nothing out of place with any of the lead lines on this window.  Carol did another great job from the cutting to the soldering. 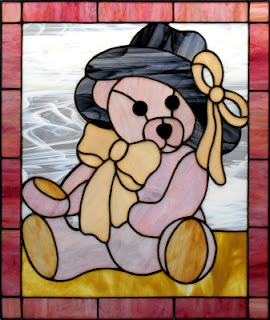 I find it interesting that the three students that worry most about their soldering popped up first in this post.  Janet is another student who worries far too much about her abilities.  But that's a good thing because it means that she isn't putting 'it' on cruise control while she's working.  And these two Transom Windows, which she began just last week, are perfect.  Again, I wish everyone could solder as 'badly' as Janet thinks that she does! 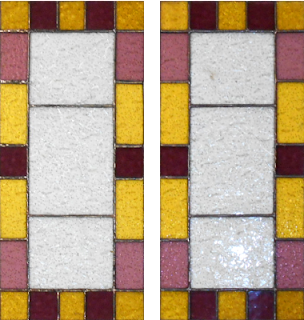 Linda L completed her rendition of the Wild Things Window and it worked out beautifully.  She wanted to add the name and I think it fits perfectly where we 'hung' it.  We tried 'Wild' at the top and 'Things' on the bottom but it was just too broken up.  Fitting it all on one line made the text too small but where it rests now is just perfect.  And pay attention to the dotted 'i' in the word 'Things'.  There are no lead lines coming off of it because Linda literally drilled a hole into the glass and then inserted the green dot into it.  She used the 1/4 inch grinding wheel for that and then learned about the fun of foiling a piece of glass that is technically inside out.  But the end result was well worth it since it stopped her from running another lead line between 'Wild' and 'Things'. Another job well done. 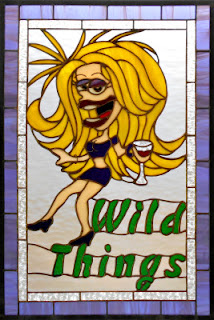 Jeanne's knocked out yet another Beveled Fleur De Lis Window.  She wasn't entirely sure if she wanted to use a double border or not but it really makes a huge difference at little cost (in terms of money AND time).   Jeanne came up with the bevel placement and the positioning of the bevels on her own which is always nice to see. 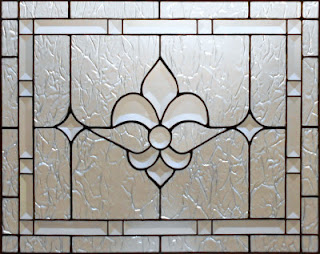 We has quite a few Bumble Bee Lawn Ornaments made this week.  Gale made 2 of them and this is one of hers.  She made hers using a standard piece of black glass for the eyes. 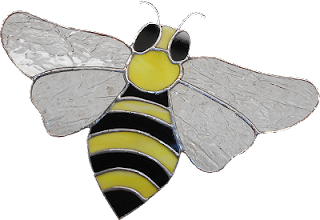 Mary Grace and Sue also made Bees but they used green glass globs for the eyes.  The rounded quality of the globs gives another nice 3D effect to the overall design. 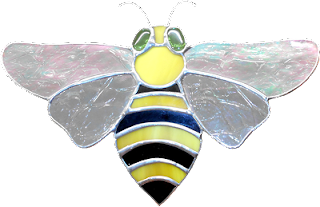 Bonnie completed her Knotted Cross Sun Catcher and also resumed work on her all clear Beveled Window design.  She's about ready to tack the beveled window but I missed getting a picture of it. 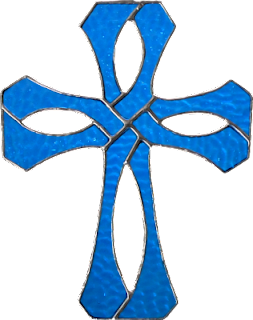 Terry is working on a New Tiger Window design.  The profile of the tiger rests in one of our standard bowed backgrounds that normally displays a cross.  And guess what?  The cross is still there!  This is going to be a very interesting merge of designs.  I can't wait to see it a little further along when we can pick out more of the design after it's been ground. 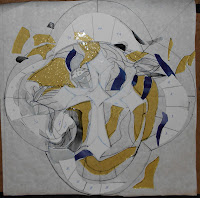 Susan is working on another Pumpkin Lawn Ornament which she now has all cut and ground.  With not that much left to go I'll wager a bet that this is completed when she returns to class. 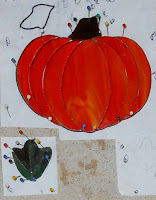 Gale has started work on a Humming Bird Window featuring an elaborate border design.  I accidentally omitted a section of the border when I was drawing it up which has thrown things off a bit but we don't use pattern pieces to do the border anyway so it won't matter at all.  Gale will make the circular section, tack it together, and then work out the border details as we add them layer by layer. 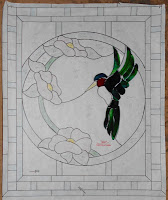 Shelley has decided to do this 3 foot tall Seafloor scene complete with Nemo (can you find him?)  She's got some of her bottom sand cut and it's looking great.  I suspect that Shelley will like doing this design as there aren't many small, curvy pieces in it to ruin a glass crafter's day.

And since we're dealing with aquatic windows, let's take a look at Natalie's Crab Window.  Her background has officially been cut and her bubbles have been ground into place meaning that she'll be wrapping these pieces when she returns. Once that is done she'll be able to tack this together and get her border attached.

Cindy's latest Circle De Lis is ready for it's border, Mr DeMille.  This is just eight thin pieces away from needing a soldering job.  What's next for Cindy?  I have no clue and that's what will make seeing what she comes in the door with so much more exciting. 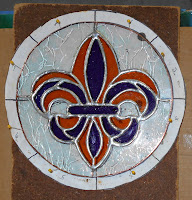 Jeannette continued working on her Pelican Window and with just a few fill-ins left to go I'd say that she has this completely under control. I don't know why so many people are against this blue/white glass for a sky-- I think it's perfect sky glass and admire Jeannette for using it.  Who knows, perhaps she'll start a trend because this isn't the first time that she's used this for a sky. 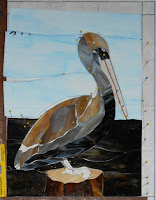 Charlie has one of his revised windows all tacked together and has taken it home to solder.  We'll see that completed when we return in time for our next update.  This one in the picture below just needs to be tacked together and then get two small fill-in's cut and fitted. If he solders this in class he may very well have TWO completed inserts next week.  But if he decides to bring it home to solder then he'll get a good start on his third and last larger version of this design.

Becky S went all the way out on a limb and did a double border on her Octagon Iris Window.  Octagon borders aren't nearly as easy as a rectangle or square one, but once you get it down it's not THAT bad to go.  Just make sure you grind as you go and to use a lot of pins.  Becky tried quite a few different colors to use on that final, larger border but in the end everyone agreed that the final border needed to be a textured clear.  And that's exactly what it is. 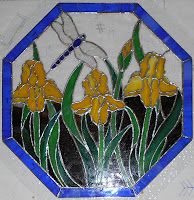 Brenda's Ornate Rose Window is all tacked and being soldered.  I have no doubt that this will be completed by her next class.  Brenda says she's over it already but all the work involved in making those ornate borders is what really makes this window so wonderful.  And check out the symetry on those borders!  Nice! 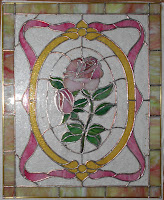 Linda L has begun working on a Transom Insert of her own which involves a lot of bevels. Aside from background and borders, there's not much to cut for beveled window designs but they always turn out beautiful  There's an elegance about bevels that you just can't be beat.

Carol has begun making a lamp and she's got it nearly all cut out at this point.  This is a fun lamp to put together but it can get a bit frustrating when it comes time to solder it.  But once you learn how to solder a lamp you can really claim to be a Master of the Solder.  Or in Carol's case, a Soldering Queen.

Ann's Flower Bouquet Window is ready for it's border.  We probably would have had it attached this past week but we were unsure if the finished size we had written down was the size of the window before the channel is added or after. I think it's the overall size but it's best not to take chances.  You might think that the night was somewhat wasted for Ann but she made the best of it and just began soldering the front side of her window. 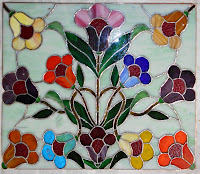 And Martha's begun working on a large Angel Sun Catcher  which has a bit of an optical illusion about it at this stage of its development.  It actually looks like she's facing towards the right with her head looking down and her hair blowing in front of her!  This 'effect' will go away when the rest of her dress and her sleeve is completed.  This is a beautiful flowing design and it's good to see it being made once again. 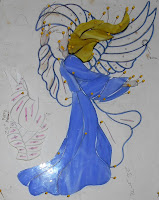 We had another Fusing Workshop this weekend and that's why this post is a day late.  It was a long weekend but it was a fun one.  We'll go over what happened in that class very soon.