Our Tip Of The Week deals with cutting glass for skies and learning how to keep the flow of the glass intact when split between pieces.  In Paula's New Orleans Window a good third of the glass that she purchased for her sky was 'wasted' when she cut all of her pieces in a row allowing for the cloud pattern to be consistent even between the small wooden railings of the top balcony.  The only problem with cutting glass like this is that it doesn't allow you to position you pieces efficiently.  There always seems to be a trade off between form and practicality.

In Betty's Pelican Window she was able to piece together her sky in two separate sections since the wing of the bird split the sky into different sections.   As long as the color balance between the sections matched, the sky would appear to be seamless.  Could it be THAT easy though?  Of course not.  The upper right corner had to be split due to the length of the window so now the smallest corner of her sky now had a hole in it.

Sliding the leftover scraps of glass into the missing piece gave us a bad match.  The color density wasn't the same and cutting it from this scrap would be a huge distraction to the rest of the window.  Even though it's the same glass, it just won't do.

We moved along to another piece of scrap glass that matched the color balance perfectly and we could have been happy with just that but then we went one step further for a nearly seamless fit.

What we did to create the illusion that the two pieces of glass were one and the same was to position it soat least one part of the grain match to the piece next to it.  We simply took the darkest blue line (to the left of the split) and made sure that it carried through into the replacement piece (see the circled section in the picture below).  Now, when this window is completed, you'll never suspect that the sky was pieced together! 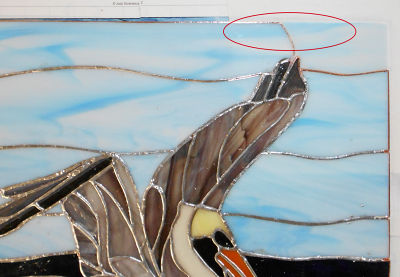 Remember that just pattern placement is an important part of making your window 'flow'.  The grain of your glass is a subtle yet noticable part of any project that you make.

First up on our completed projects this week is the Beach Scene Window that Mary Grace made.  Aren't the colors alone stunning?  Everyone loves the orange sky which is a nice change from the standard blue that we see so often, but to be fair, an orange sky doesn't really work with most windows---but it certainly does with this one. 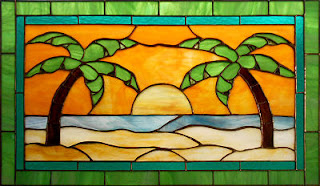 And Sheri's Crab Window is not only completed but is her current masterpiece as well. Sheri's catching on quickly because the soldering done on this window is better than soldering you see on windows that are sold in stores.  Slow and steady always makes a smooth solder bead and Sheri has proved it with this Crab Window.  The subtle differences between the three shades of green that she used are a highlight to this design.  And even though clear glass is used more than anything else this comes across as a green window with a splash of blue. 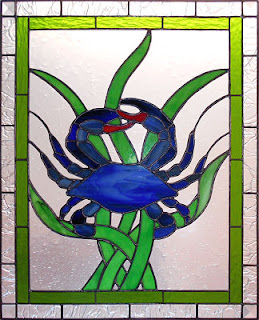 Next up is Jan's Circular Bird in Tree Window which looks every bit as great as I thought it would.  And I have no doubt that we'll be seeing this made again.  What a wonderful use of  circular globs and a perfect blend of colors.  Then there's the wire spiral for the wing which is just perfect. 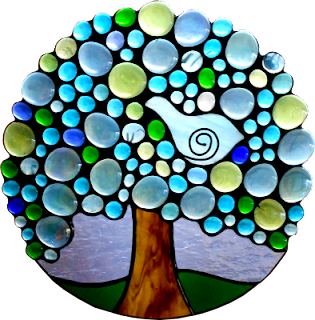 Mary Grace also came in with a beveled box top wrapped and ready to be soldered together.  Once she accomplished that she put together the four sides of her box and cut a piece of Blue Mirrored Van Gogh glass for the bottom.  After both the top and bottom of the box were washed and colored she learned how to attach the hinge and finish this beautiful project. 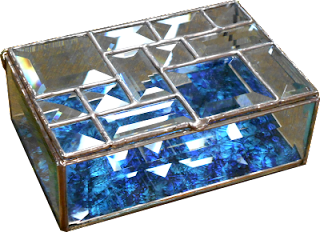 Jeannette finished her Religious Themed Window just in time for its presentation this weekend.  She did an incredible job on this especially when you consider that it was done in just one week.  There's no doubt that this gift will be greatly appreciated. 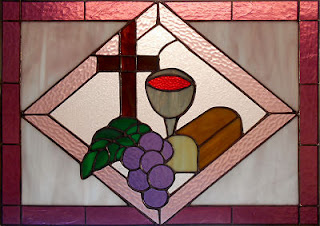 Cindy completed her Birds On A Wire Window and it turned out every bit as beautiful as the last one she made.  This is always a head turner and we already have one student wishing she could see the actual piece.

Susan R. completed her Birdhouse window and all I can say is that it's another job well done.  If it looks like a birdhouse you know she's done the job correctly and this certainly looks like a birdhouse to me.  Susan has been making a lot of these oversized suncatchers and they really do have a level of detail all of their own. 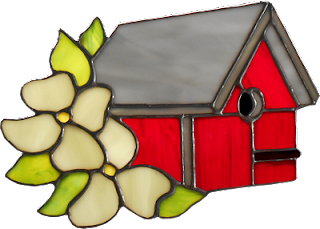 So after her missing sky piece was matched and tacked into place, Betty began working on getting her double borders assembled.  She went with a thin inner border of orange and a thicker, darker blue outer border.  Once they were tacked into place we cut and soldered the final Zinc Channel around the outside edge of the window.  That means that Betty is ready to begin soldering this Pelican. 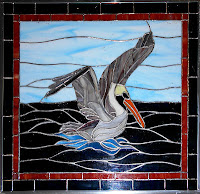 Ann began her Acadian Flag Window by cutting out the central figures inserts that make the three distinct sections of this window.  In one night she got her Star, Castle and three mini Fleur De Lis' cut and ground.  Once these are tacked together she'll cut the backgrounds and then have this all assembled.  Ann moves quickly and efficiently these days, that's for sure! 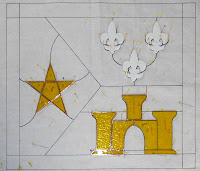 Cindy also started working on an old favorite of hers that I think she originally made right around the time that she made her first Birds On A Wire project.   This flowing Geometric window always looks great and it's perfect for Cindy because she loves to work with small piece of glass. 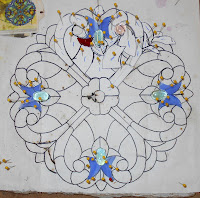 Let me just state for the record that Paula's done  amazing work on her New Orleans Window.  The hardest  parts of this project are well behind her now and it's just about ready for its  borders.  Paula's already picked the glass for the clear windows but her border(s) can easily be attached before those are cut out.   As I mentioned in the first paragraph of this update, pay particular attention to the sky which flows seamlessly across the top of window.  Had she just thrown the pattern pieces onto a blue instantly grab your attention and be very distracting.  Thankfully, that's not the case here. 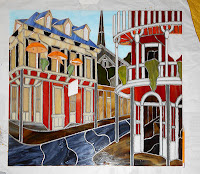 Jan began working on this large Basketball Window this week and has nothing but background left to cut.  The net on the bottom of the window is formed out of the lead lines that separate the glass and Jan has all of those pieces traced out already.  You can even see them (numbered) on the right side of the picture. 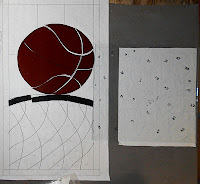 Rowena started a Humming Bird and Flower Vine Window that we haven't seen made in years.  This is a standard stained glass design and it's great to see it re-surface again.  Although Rowena's only been working on this for a week she has the majority of it cut out already with only the background left to go.  She's already got everything but the background glass ground and fitted into place so the rest of this should go quickly for her.

Lynn M came in and started working on her first real window with us.  She's making a beveled Fleur De Lis with a double border and already has the background all cut out and ground.  I'm sure we'll see at least one border attached to this when she comes back in because Lynn has caught on quickly! 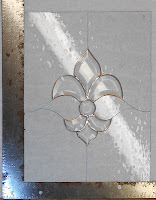 Tasha and Charlie combined forces this week and worked together on the Fleur De Lis window that Tasha was working on last week.  Charlie was going to start work on an American Flag but discovered that sometimes small changes to a pattern are not as small as you initially believe they will be.  He'll be soldering this FDL at home so there's a good chance this will be among our completed projects next week. 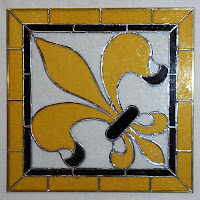 Susan R started a large Flower Pot suncatcher and the glass she's chosen for each part of it is picture perfect.  Her cutting and grinding are both spot-on and Susan has mastered the art of using a previous piece to make grind lines on secondary pieces. Looking at the picture it would appear that Susan will be making two of these large suncatchers.  More details will surely emerge when we return. 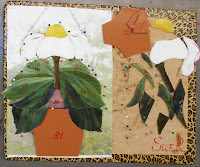 Next, Brenda has her Redfish Window all wrapped and will tack it together when she comes back in.  Once that's done she'll cut out two missing pieces and then be able to add a border to this window.

And Martha's Seafood Window is moving along swimmingly just like the work is on her pool at home.  Martha's got just two crawfish to cut out before she begins working on her background glass.

Susan D has one, two, three, four, FIVE(!) more living items all cut out,ground, and ready to be  wrapped.    This week she concentrated on Flowers and will be ready to move onto the nice, simple leaves soon enough.

Myrt is officially ready  for the background to be added to her latest Cardinal Window.  Once this is completed she'll have just one more to go (I think).

Becky S has completed  soldering the first side of her large Spiral Window and has flipped it over to begin working on the second side.  She's about halfway through the soldering on this side and the picture below nicely illustrates what the copper covered pieces look like both before and after the solder is applied.  The side on the right is soldered while the left side is not. 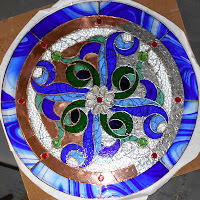 Terry's begun tacking her second Spiral Flowers Window and will begin adding borders to it when she comes back in.  I think Terry is looking forward to moving on to smaller items after this is completed and I can completely relate to that (since all I've been working on is larger windows myself). 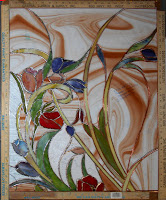 Bonnie is just about ready to wrap this Cardinal Window up.  This week we saw her solder the front side of her window, get the zinc channel attached, and replace a broken piece of the background glass.  We knew the piece was broken but until the window was securely soldered we weren't able to hang it over the edge of the table to knock out the offending piece.  Sometimes you need to exercise a little patience before you can fix a problem, but that's all handled now. 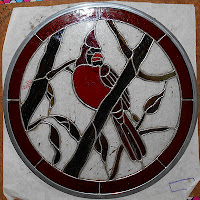 Then there's Shelly's who has her Duck Head completely under control.  She's begun wrapping the pieces so she can tack the central figure together and then add her four background pieces and border. 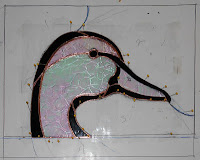 And to wrap things up we'll take a look at three Butterfly Lawn Ornaments that were completed by Jeannette, Linda L, and Rowena and which are pictured in that same order.  These are so popular now that I couldn't ban making them if I tried!

Well, I can't believe it but according to GOOGLE we've had over 40 thousand hits on this little weekly Blog that we put out.  That's a lot of people dropping by here each week and I certainly appreciate everyone who takes the time to read or even just glance through any of this.  It makes the time it takes to put this together well worth it.

Posted by Bayou Salé GlassWorks at 10:30 AM