We're going to start things off by examining a problem that happens often when soldering a window-- the unexpected solder drop onto a piece of glass.  No matter how careful you are it's easy to have a stray blob of solder fall off your iron and land on a piece of glass that's already tacked into place.  Most times these drops simply flatten out onto the glass without incident but sometimes (especially if there's a lot of solder involved) it can take the shape of a small blob and just sit there boiling away on your glass.  Whenever this happens the best bet is to keep your iron off of that solder blob.  Touching your soldering iron to it in the hopes of pushing it into a lead line may very easily (and frequently) crack the glass.  If a blob of solder falls onto the glass your best course of action is to hold the end of your roll solder to it and let it cool for three or four seconds.  Once you see that the  surface of the solder blob has solidified gently lift upward and the ball of solder should come up off of your glass.  Never forget that heat can break glass and that touching your soldering iron to a solder blob will most likely cause a crack to occur. 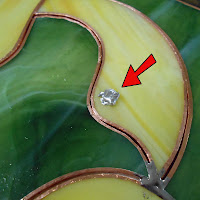 Now onto our students work.  Rowena completed her Dragonfly Window and it turned out even better than I thought it would.   I've always loved this pattern but her decision to make it with two borders only helped set it off even more.  She matched her thin border to the Dragonfly's body color and then repeated the background glass as her final, thicker border.  The resulting window is nothing short of stunning if I do say so myself. 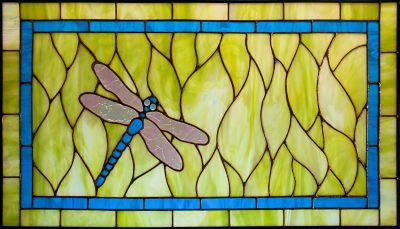 Lynn M is our newest student and what a great job she did in her first class with us.  A lot of beginners have very few problems while making their Butterfly but Lynn is one of those students who caught on to each step almost instantaneously.  From cutting and grinding, to wrapping and soldering, Lynn showed me that she's going to be a formidable student in our classes! 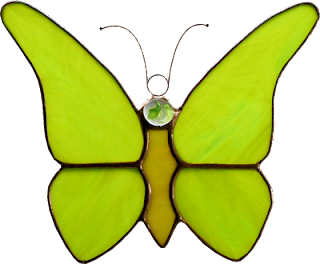 Next up is a picture of a Flower Hand Mirror that Rowena made completely on her own while she was home this past week. This is 100% her creation and she even remembered to use silver back foil on the mirror (something that most people forget about).  What a lovely job she did on this. 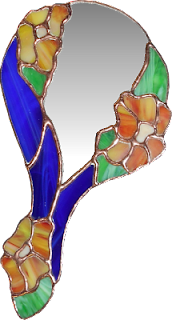 Barbara came in knowing that she's be cutting more glass which included all of the background pieces to her Heron Window.  She figuratively flew through the cutting process and even started grinding it during class.  I think she's a natural at this. 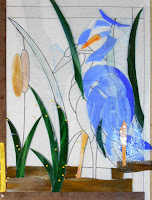 Bonnie got the rounded border attached to her Cardinal Window and although she was leaning towards a green border she ended up going with a dark amber/brown instead.  It was one of those fortuitous finds that just 'worked' the moment we saw it next to what Bonnie had completed.   It's hard to see in the photo but when it's up off the table you'll easily see just what a great choice this was. 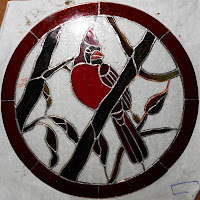 Jeannette was a busy woman this past week.  She managed to put together almost all of this Religious Themed Window while she was at home and when she brought it into class all it needed was its final border and a brass channel which she attached without a problem.  She's taken this home to solder and I know that she'll have it completed next week since it's a project with a deadline that lands on the following weekend.   Jeannette's got this DOWN! 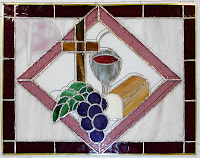 Lara completed all of the grinding on her Flower Window and has even begun wrapping all of her pieces.  She's moving along at a nice pace and I think we'll see her pick out a border glass for this when she comes back into class. 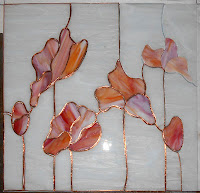 Cindy's Birds on a Wire project is all cut out and she was able to put our tip from last week (making small round eyes) to good use.  Now that this is almost completely wrapped I suspect that we'll see her soldering it next week.

We have two shots of Becky S's Spiral Window this week starting off with the front side of her which is now all soldered.  She's taken it home with her so she can hopefully work on it throughout the week. 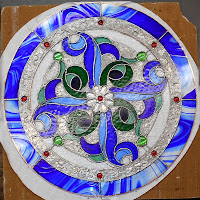 Our other two views of Becky S's window help show what she's doing differently this time around.  She'll be doing a little more decorative soldering work as compared to the first Spiral that she made.  And how will that be done?  Well, she's tinned some wire and has cut it into assorted shapes which she'll solder  into the leaded sections of the window to give it even more texture.  It may sound odd but the difference that these accent wires make will be profound. 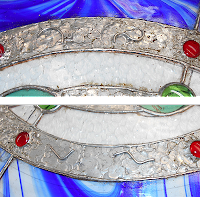 Jan has all of her Round Glob Tree Window completed but we found a crack running through one of the large globs.  I originally said that in a window with this much lead it was be impossible to replace any broken pieces but this was a large glob and I felt that something could be done about it.  When Jan left I worked on removing the broken piece and, as you can see by the red arrow, it's ready to have a replacement glob inserted.  Jan will color this black when she returns and then take it  on home with her.  I can't wait to see this lit up. 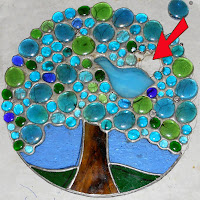 Martha resumed work on her Seafood Window which we haven't seen in a while.  It's funny how orders can  detour us from what we want to spend our time working on.  It's good to see this again but I know Martha has been talking about a cross window that she needs to get made...

Becky B continued wrapping all of the pieces in her Irises and Dragonfly Window.  Wrapping can be a tedious process but Becky isn't daunted by it and is moving along nicely.  Before you know it this will be wrapped and ready to be tacked together so it can get its border. 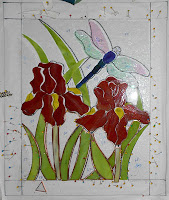 Susan D has added two frogs to her project and she's got them both cut, ground and ready to be wrapped.  This means that we have to change the name of what she's working on to her "Flowers, Leaves, Insects and Amphibians Cornucopia".  Is it just me or does that have a nice ring to it? 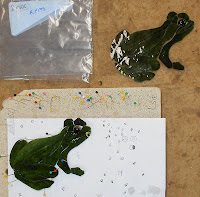 Shelley has resumed working on her latest Duck Head Window again and has decided to use regular, non iridized krinkle glass for the background.  She's working on grinding the pieces now but is finding it slow going since some of the pieces (in black)  are so terribly thin.   One slight mis-grind means that you have a piece that's too small and this has been a bane to Shelley this past week...

Myrt's second Cardinal Window is a grind-as-she-goes process and Myrt will be ready for background glass and a border once she gets this tacked together.

Linda L worked on her Butterfly Lawn Ornament by grinding it and then wrapping all of the pieces while being careful to start and stop the foil on a section of the glass that will touch another piece of glass,  She's all ready to tack and solder this butterfly. 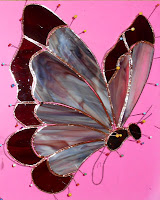 We saw Terry resume wrapping her Spiraling Flowers Window of which she has a good two thirds of it foiled now.  She will most likely begin tacking  this together so it can get its final two borders attached very soon now. 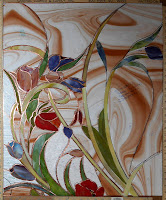 Sheri got her final border attached to her Crab Window and she picked a glass that she didn't realize she'd  used before.  It  turns out that clear krinkle glass is what she used for the border on her last window as well.  At least she's consistent with what she likes!  She has the first side of this soldered as well as a good third of the second side.   Look to see this completed when she comes back in.

Susan R started this large Bird House and Flowers Suncatcher and got as far as grinding almost all of it.  She ended up with one red piece that was cut too short and will need to replace that but she didn't have any more of that red glass with her.  We'll see that final piece popped into place and then see this soldered when it returns next week. 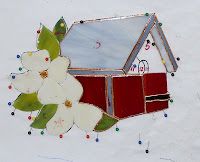 Brenda's got her Redfish Window on the line and has begun reeling him in.  There are a few small pieces of green left to cut out but she's altered the pattern and will fill them in once she has this tacked together.  Meanwhile, she's begun the wrapping process on this window.

Mary Grace completed the soldering on her Beach Scene Window and has made great strides in her soldering abilities.  Slow and steady not only wins the race but it wins it in a smooth, professional manor.  This just some hooks on it and then she'll wash and color this window.  It's just about time to call this project completed.

Lastly, we take a better look at the Tiger that Jeanne will begin cutting next week.  Her pattern is tweaked, cut out, and ready to be transferred to glass now.  All I can say is that it's going to be stunning because all of the black that you see, will be lead (just as in Becky S's Spiral Window). 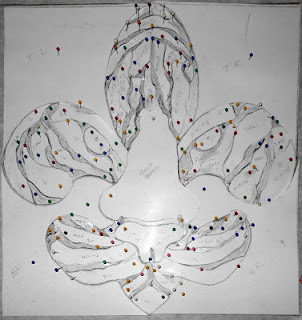 In closing I'd like to give a call out to Richard.  We hope all is doing well with you and although we miss Carol we're happy to know that you're in great, capable hands. We also wish the very best for Natalie and her daughter as well as Judy and hers.  Things just aren't the same without you wonderful people here.

And that's it on our end.  This post is actually a few hours early this week due to some free time that came about today.  You have to love the fact that a Blog can be written while in a dentist's waiting room.