This week we start things off by stressing how important it is to take your time while cutting your glass.  Many students still believe that cutting is of little consequence since the grinder can 'fix' things.  While this is true it's also the least efficient way to cut glass.   Grinding is a long and tedious process that takes up far more time than simply cutting correctly in the first place.   Remember to keep your cutting wheel either ON THE LINE or just inside of it and to move SLOWLY and evenly (with SLOWLY being the key word).  I can't stress this enough.  You can see below that no pattern line has been left behind on the yellow pieces that I've cut out and stacked together.  It took me about 15 minutes to cut out 28 of these curves and believe it or not you are looking at all 28 of these pieces stacked in front of one another.

Here are the same pieces of glass viewed with the camera raised so you can see that there are indeed pieces stacked in a row here.

Again, the same pieces with the camera showing you an almost top down view of the 28 pieces. 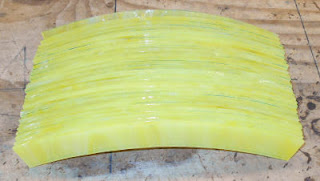 If your glass isn't cut correctly I can guarantee that you will spend FAR more time at the grinder than you should.  I only briefly skimmed these curves to get everything to fit together perfectly and I did it in less than 15 minutes.  That means that in just under a half hour I had all 28 pieces cut, ground and fitting together perfectly.   The only trick was keeping my cutter on the inside of the line I had drawn onto the glass.  You can do this as well if you remember to take your time and focus on cutting accurately.  Haste makes waste!


So Bonnie completed her first Cardinal Window and it looks stunning.  The brown/amber border is a perfect fit for this earth toned window and compliments it without stealing the focus away from the red Cardinal itself.  As for the circular border that gives so many people trouble, well, Bonnie handled it without any problem.   If you don't fear something going into it, you tend to get through it faster and easier. 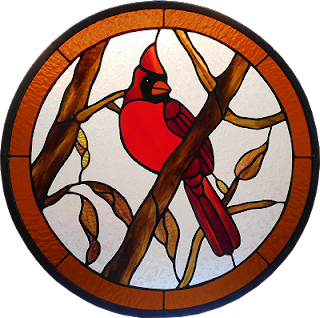 Tasha finished her Fleur De Lis Window this week and did a wonderful job soldering it.  She got worried when she was trying to solder the back side without enough flux on it but once we addressed that problem things went smoothly (literally).  She had wrapped her clear pieces in Silver backed foil so I assumed that she would leave it silver but at the end of the day Tasha decided to color the lead copper and will actually go through that process when she returns next week. 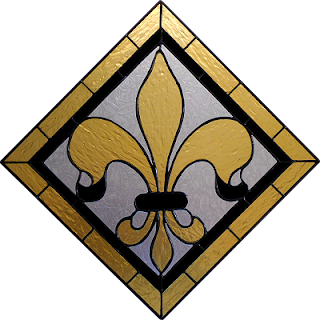 Susan R got her first oversized Flowerpot Suncatcher completed and it's a winner.   She's altered the pattern to give the flower more petals and now understands  that patterns need not be carved in stone.  A great job all around and she's got one more on the way that's almost completed as well. 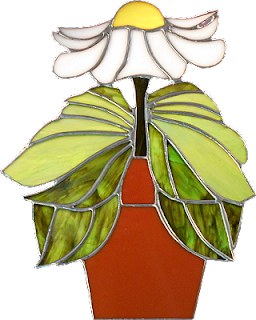 Barbara finished all of the grinding on her Heron Window and it looks great.  There was a small incident with one of her long leaves breaking in half but we're repairing it in an efficient manor that we will discuss as our tip of the week in next weeks post.  Always remember that patterns can easily be changed. 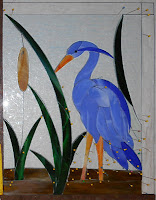 Cindy continued working on her 'smaller than a window but larger than a suncatcher'  Geometric Design and told us that she's signed up to do a show in November.  That means that Cindy will be working on a lot of smaller items over the next few months (since that's what sells best at shows). 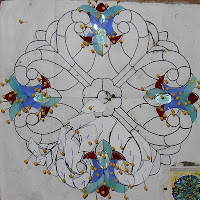 Sheri began working on a new window this week that she's making for her son (who is a chef). She started cutting all of the pieces for her Pig Window on Tuesday and walked out of class with only a few of the black pieces left to cut.   She took it all home with her and then came back in for an extra class on Thursday, got the remaining pieces all cut out and even started grinding a good portion of it. I must say that this is fitting together  wonderfully because Sheri completely understands the 'grind from the opposing piece' strategy of grinding. 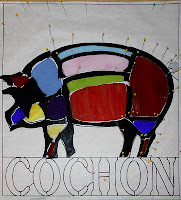 Jeannette has the first of two cabinet door inserts almost completed already.  She's using all clear glass and decided to go the full nine yards and use bevels for her inner border.  Because bevels only come in set sizes we've had to alter the pattern slightly to accommodate for them but it was a very easy change to make.  These inserts will certainly make her doors come to life. 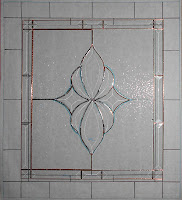 Jan resumed work on her Basketball and Net Window which has now entered the grinding phase of its creation process.  Jan took her time to carefully cut within the lines of the pieces that form the net so grinding should go nice and easy for her.  This window is larger than you might think being over three feet tall.  Because of that length this window will require a zinc channel to give it some added strength and stability.

Mary Grace did wonderful work on her Watering Can and Flowers Window.  She's used the back of the glass to incorporate the straight lines into the design which gives her watering can a nice, realistic sense off depth.  I honestly wouldn't have thought to do that so kudos to Mary Grace for a GREAT idea! 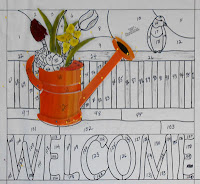 Jeanne has begun cutting the dark amber glass of her Tiger De Lis Window and is grinding her pieces as she goes.  The 'pieces in between' will all be covered in lead and I think this is going to look awesome when it's completed. 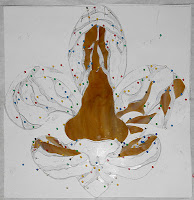 Lara wrapped the remaining pieces of her Poppy Window and then set upon tacking  all of those pieces together.  Once that was completed she got her border strips cut to size, skimmed them and took them home to wrap.  There's a solder job in this windows immediate future and that will start when we see Lara again next week. 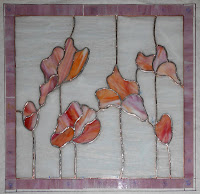 Becky S got the remaining soldering completed on her large spiraling Window and even got the zinc channel attached and mostly coated with lead as well.   With only the extreme outer edge of the channel left to texture over with solder, this window will be cleaned up and colored next week for sure. 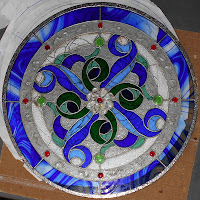 Becky B got her Irises and Dragonfly Window almost completely wrapped this week which means that this will be tacked together shortly.  She's concerned about spaces throughout this window but everything is proportionally spaced which means that when this is tacked together there won't be any problem at all.  I know she has her doubts but sometimes seeing is believing. 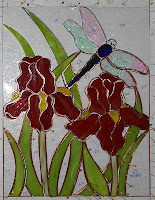 Linda L escaped with her Wine Bottle Window last week before I could get a picture of it so she was inadvertently left out of our last post.  This week I made sure I got a picture and just look at how far she's moved along in just two short weeks!  She'll be incorporating five actual  wine bottles into this window and you're going to love it when you see it all come together.  Aren't those  fancy globs that she's used for the grapes wonderful? 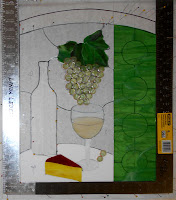 Rowena added a pair of borders to her Classic Humming Bird and Flowers Window with the color choices being based on a window that she had completed when she first started classes with us.  Rowena, like myself, believes that a double border adds a lot to a window and it's becoming a signature look for almost anything that she makes.  Soldering on this will most certainly commence while she's at home during the week.

Lynn wrapped all of the background pieces in her beveled Fleur De Lis Window with silver backed foil (which is a bit of a chore on it's own since silver backed foil rarely wants to stick on glass)  and then followed her daughters lead and tacked her pieces together as well.  She's picked a grey glass for her thin, accent border and already has them cut, skimmed and ready for foil.

Susan D has all of her leaves cut out now and just look at that line up.  She also  got two more flowers cut and ground as well which leads me to believe that this will be one very bountiful Flower Cornucopia when it's completed.

Then there's Martha who has only one crawfish left to go in her Seafood Window and then it's background for her.  I'd recommend wrapping all of the pieces first to help minimize the problem of expansion that the foil on these pieces will introduce to the window.  If these are wrapped before she cuts her background she'll only need to grind things one more time without having to worry about things growing due to the foil that will be added to each piece of glass.

Brenda got her Redfish Window all wrapped and tacked together which then allowed her to cut out the two missing pieces of leaves that were altered from the original pattern. Once all the pieces were filled in Brenda picked out a color for her border and got that cut into strips and pieces.   These will be tacked on when she returns and then she'll begin soldering. 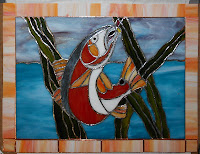 Terry got the first border cut for the top half of her Spiraling Flowers Window and will attach that when she comes back in next week.  Once that's attached we'll add the final, larger border and then the zinc channel.  Since she already has to center flower section soldered she'll be working on the back side of this before you know it. 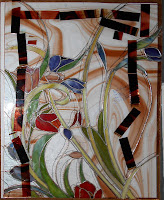 Shelley has the background for her Duck Head Window all cut and ground and she now says, "No more duck heads"!  She's ready to add a border to this so the hard work is all behind her now.  Perhaps by the time this is completed she'll mellow out about making another one (but I wouldn't hold my breath on that). 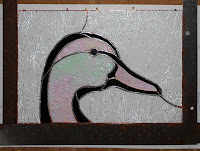 Myrt has her Cardinal all ready for soldering and has used a beautiful purple waterglass for the border.  It may look dark while it's resting on the table but when this lights up it's a nice light, vibrant color.  The great news is that we just learned that Spectrum Glass doesn't make this glass-- they only distribute it.  That means that waterglass will NOT be disappearing at the end of July.

Bonnie also began work on this Butterfly Lawn Ornament and has the wing pieces all cut and ground.  She's taken it home to wrap and will certainly complete this when she returns since it's only got three pieces left to go.   After this is finished she may very well begin working on her female version of the Cardinal Window. 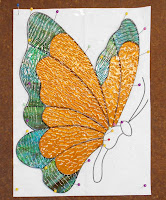 Charlie worked on an American Flag Pattern by tracing over an image that he found on the internet after printing it out to the size that he wants to make this window.  The finished pattern is beautiful and since he actually put the pen down to the paper it's all his.  There are a lot of stripes in this design but the curves are all very graceful making the cuts simple enough to do in one pass.  If he moves at a slow and steady pace while cutting on his lines he'll have this fitting together nicely before it gets it to the grinder. 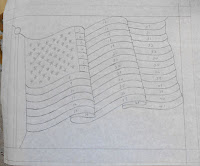 And that about wraps things up this week!  Wow, have we been busy in the shop-- between all the work that the students have been accomplishing  and my work on the latest Church Windows the place is certainly hopping.  Look for more pictures when we return in a week.