Eyes tend to scare our students.  When we make small eyes for birds we normally use the small 1/8th inch grinding wheel to grind a half circle between two pieces of glass. (Take a look at the red eye in Jeannette's Peacock a few pictures down.)  This is what the pattern would look like. 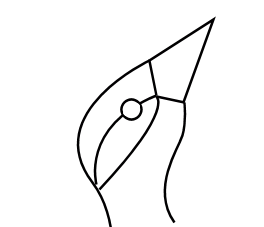 As I said, grinding the hole for the eye is simple with the small grinding bit but then everyone tends to panic because they can't understand how they will possible cut out a circle that's only 1/8th of an inch around.  The thing is, you don't!  The answer to the problem is so very simple:  Just start with a square piece of glass that's 1/8th of an inch.  It's far easier to cut than you might think, just use your grozier/breaker pliers to help.  Once you have the square cut out you simply grind the four corners off by touching them against your regular grinding head.  You do have to hold the piece in your fingers instead of resting it on the grinder bed however or your piece may fall through the grate and into the water below.  Handling it this way will ensure that you have a completed eye within 60 seconds!

Ok then, let's get onto things by looking at the Micky Mouse Lamp that Linda L completed this week.  It certainly looks every bit as great as I expected it to.  Her work on this was flawless and everything lined up perfectly when she attached the four sides together.  She'd taken her time every step of the way ensuring that this would turn into a beautiful one of a kind lamp.  I also loved the fact that she decided to use black patina on the lead to simulate the black lines of a cartoon.  This is going to look great in her Mickey Mouse Room. 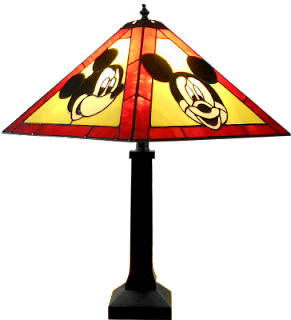 Martha's Yellow Rose Window is officially completed and just in the nick of time.  It was a gift that had to be done by the weekend and it turned out beautifully.She did a wonderful job especially with her cutting and grinding. 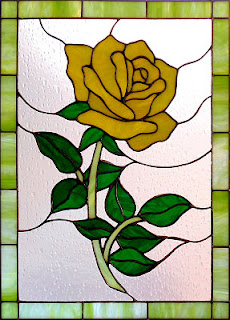 Jeannette completed her small Peacock Window and it's got an elegance all it's own.  Last week she had cut some teal glass for a second larger oustide border but in the end she decided not to use it.  I have to say that I like the look of this so much I plan on making one myself. 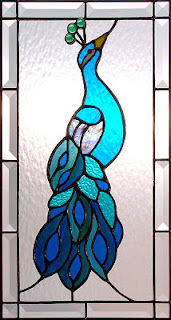 Ann completed her latest Rose Bud Window and the background glass makes this stunning.  Ann pulled out both the teal and the red that runs lightly through the background glass by using them as separate colors for the flower petals and also in the leaves and thin accent border.  What else can I say other than, it's beautiful! 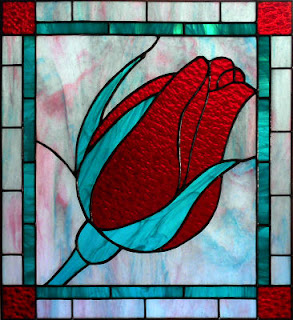 Now let's take a look at Charlies second Bird of Paradise Window.  It's identical to the first one in color and design with one slight exception:  this one is a mirror image of his first window.  He did wonderful work on this and I know we'll be seeing more of that  throughout the weeks and months ahead. 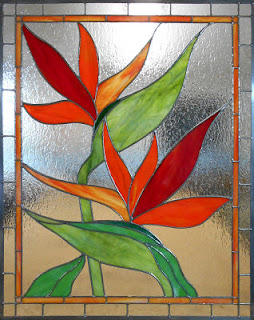 Tasha has completed the first of her hand mirrors and learned about the joys of working with mirror.  She did an excellent job putting this together and her grinding skills are rather impressive if I do say so myself. 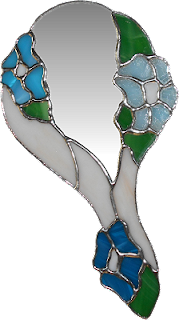 Terry started and essentially finished this TE Electric Logo while at home and only brought it in so it could get a piece of channel around it and some hooks.  Once that was done I took a picture of it and here it is.  Great work! 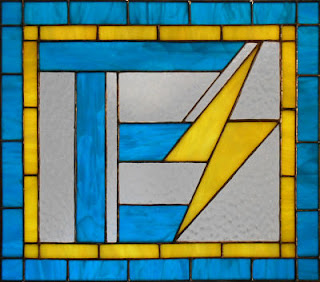 Barbara  decided that she's make a Heron for her first window and by the end of the class I was thoroughly impressed with all that she's accomplished.   When she said she wanted to use two different blues for the bird itself I hoped that she'd  pick similar colors rather than sharply contrasting colors as so many beginners do.    As you can see, she chose wonderfully.  Subtle shading is always the best way to go. 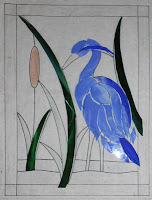 Paula worked on her New Orleans Window and we see where she's made a few changes along the way.  She was unhappy with the color of the sideswalks and did the right thing by swapping them out for a color she liked better.  When making a window this complex the last thing you want to do is finish it using a color that you wish you'd have changed when you had the chance.  This window is looking more and more fantastic and will surely live up to the other rednditions of it which have been made in the past. 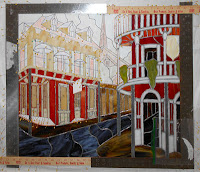 Lara is another student that got plenty accomplished this week.  She pulled out the sheet of wispy white glass that she had traced her background pieces onto and began cutting them all out.  There are a lot of tricky cuts in this pattern and Lara was able to see first hand what can be cut and what needs to be ground out.  And speaking of grinding, she's already begun grinding this window and is past the halfway mark on it. 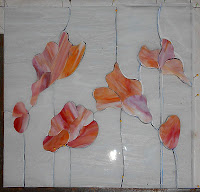 Brenda resumed work on her Redfish window and has it almost completely ground now.  I have a sneaking suspicion that she'll be wrapping these pieces when she returns next week.

Cindy certainly appears to have her  birds all in a row and it won't be long until we see this hanging up with some light behind it.  Cindy excels in windows with small pieces and this project certainly backs up that statement.

When Tasha finished her Hand Mirror she moved along to her Fleur De Lis Window.   With the center portion all wrapped and tacked together she learned how to cut 45 degree cuts for her inner border joints.  Everything lines up nicely and when she comes back in she'll add a final border and be ready to begin soldering this. 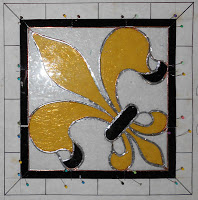 Bonnie's completed the grinding on her first cardinal window and managed to get everything wrapped while she was in class.  She's taken this home to tack it together so she can add the its border when she returns. 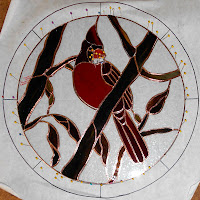 Becky S has her final baroque blue border all cut, ground and attached   She's started soldering her window and has all of the foil covered on the front side of it.  She has the texture looking just the way she wants on the solid lead sections and is now contemplating adding metal accent pieces to it. 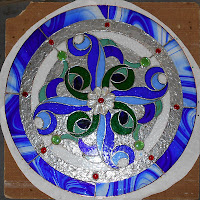 Mary Grace got her double borders attached to her beach scene window and then added the final brass channel.  That means that this window is ready to be soldered.  I already know that when this is hanging up it will look spectacular.

Myrt continued work on her second Cardinal Window and now just has a few flower petals and leaves to go before she can set this into her background glass.  It won't be long before that happens because Myrt is grinding everything as she goes along.

Jan got the beads in her Bird In A Tree Window all tacked and then cut the remaining pieces of sky, ground, and tree trunk.  The top edge of the sky was traced from the beads in the tree to ensure a perfect fit.   Everything now fits together and is wrapped meaning that Jan will start soldering this when she comes back in. 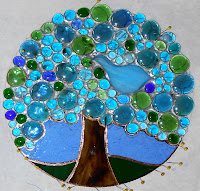 Terry resumed work on the top half of her Spiraling Flower Window by squaring it all off and holding it into place with boards.  She's begun wrapping her pieces and will be adding borders before you know it. 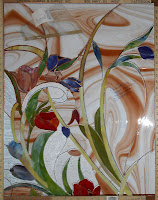 Sheri got her background tacked into place and then filled in the 2 pieces that had broken while she was cutting.  After quickly handling that she had to pick a color for her thin inner border that would act as an accent color.  Since the person she's making this for wanted a lot of green in the window Sheri found a green that wasn't an exact match (which she didn't want because the green leaves would then 'bump' against the same color) but still complimented  the green leaves.  This thin border helps set the color for the overall window making it green without overwhelming it with a single thick border of green. 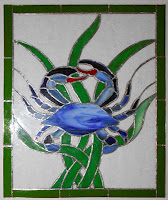 Rowena got her Dragonfly Window all tacked together and then worked on the two borders to finish it off.   For the thin inner border she picked the same glass that she used in the Dragonfly's body.  then, for her final border, she went back to the glass that was used in her background.  Her colors are perfect and the look of this window is greatly enhanced with the double border.

Susan D has gone as far as she can with the Butterflies and Dragonflies that she worked on last week and began working on two Bee's that she'll also be incorporating into her Flower Cornucopia.  She cut these out in no time whatsoever and even has one of them completely ground already!

After Linda L completed her Mickey Mouse Lamp she found the time to get this profile Butterfly Lawn Ornament started.  After working on Mickey Mouse I find it hard to believe that there's anything that can stump her now. 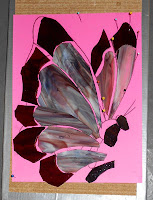 This week we also look at our latest completed bugs which include two Butterflies and a Dragonfly made by Susan R (the first three in the picture), as well as a Butterfly by Jeannette (on the far right).

We have a new student arriving in our next set of classes so expect another Butterfly when we return!