Just a Small Brown Squirrel, Living in a Lonely World

Before we look at the work that was accomplished this week I'd like to quickly go over the rules of tracing out your pattern pieces onto your glass.  Most times I see students laying out pieces as shown in the picture below which is fine but also very wasteful.  It doesn't matter of you're a great cutter or a bad cutter, you only need a half inch (at MOST) of space between each of your pieces.  If the glass is going to break, it's going to break no matter how close your lines are to each other so you might as well conserve glass.   Also remember to butt straight edges against the straight edges of the glass.  Why waste time cutting four sides of a square when you can cut it out in just three cuts.  You can also butt straight cuts against each other as long as you plan on a way to get your cutter through them.  (more on that in a week or two).  If you have a lot of straight edges pieces draw a straight line across your glass with a straight edge and then line your pieces up to the line you've drawn. 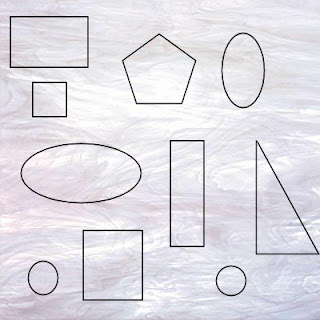 Here are the same 10 pieces placed in their best possible positions on the glass.   As you can see we've managed to save half of the glass for anoher project.   Now think about how you would break up those 5 pieces made up entirely of straight lines.   Think about what your first cut would be and continue until you get to your last cut.  You can easily get all of those straight pieces separated in just 9 cuts whereas in the first example it would take 19(!) cuts.  Can you see how it's done?  Here's a starting tip:  USE A PISTOL GRIP CUTTER ALONG WITH A STRAIGHT EDGE!   Never try to cut straight lines by hand unless you want ragged lines.  Come back next week and I'll show you how easy it is to break this down. 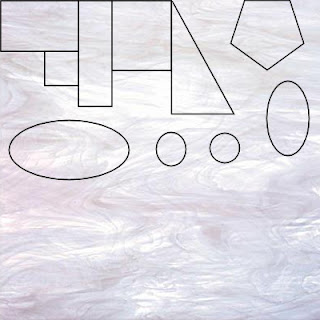 So then, our first completed project of the week comes from Terry who has re-made a Santa Face that she made last year.  Although it's hard to see in the picture, Terry has only colored the lead lines that form Santa's glasses and those lines have been done in black patina which she applied with a Que-tip.  After it sat for 45 minutes she carefully cleaned up the excess patina with a damp sponge and then cleaned away any unwanted black with a small piece of steel wool.  The end result is striking and has me ready for Christmas! 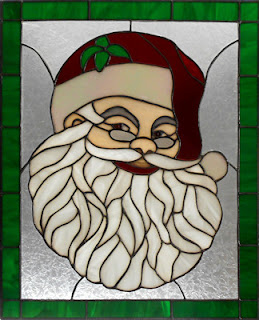 We also have two more pumpkin windows that were completed this week.   Isn't it amazing what difference colors can do to a pattern?  The clear one on the upper left was made by Mary Grace while the brown one on  the lower right was completed by Betty.   Both windows are made from what would be considered 'Fall' colors yet they look completely different.  Amazing. 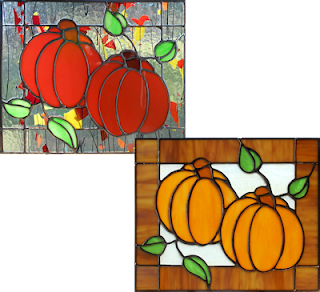 This week we also take a look at the newest Industrial Fleur De Lis that we have under construction.  This one is being made by Betty and will hang in the direction that you see pictured.  One of the nice things about this Fleur De Lis is that the angular, close-up view allows you to hang it any way you want be it a portrait or a landscape view. 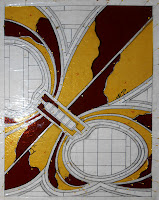 Bonnie has officially cut all of the glass for her Geometric Design Window and is moving along quickly with the grinding of it.  Before you know it this will be completed and out the door but before that happens we will be adding a border to it.

Roxane has moved along seamlessly to her next project and it's an Address Window. On just her first class into this she's already got the numbers and the white background cut out and  almost completely ground.  I going to say she finishes this in just two more classes!

Becky S has all of her flowers ground and fitted with each other in complete perfection.  She's begun wrapping these pieces and pretty soon we're going to see the background get cut for this beautiful window. 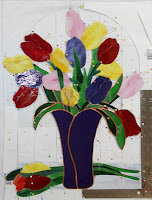 Myrt came in and finished wrapping the pieces of her purple Cross.  Once she tacked that together she cut and octagon out of Glue Chip Glass and then traced the cross onto the center of it.  Once she cut the background in to four sections she was able to remove the 8 pieces of glass where the cross will rest for a perfect fit.   Her border has already been cut and now all she needs to do it wrap and solder! 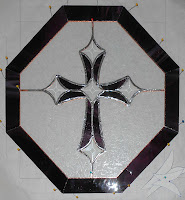 Lara's African Woman is so close to completion.   Her background has been cut from a clear but heavily textured reeded glass that works wonderfully with this design.   Lara will certainly be adding borders when she comes back in after the holiday and I can't wait to see what she decided to do with them.

Paula has been busy working on boxes and the fruits of her labor are ever so apparent this week now that she's begun making the bottoms for all of them.  She's going to begin work on one last top and then she'll wrap these all up (literally). 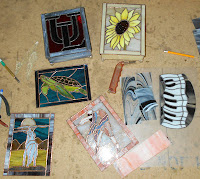 Susan R has also been very, very busy this week.  She's managed to cut out, grind, wrap and even tack together these Christmas Drums and Stockings.   Look for a completed picture when we return next week.  This is wonderful work here. 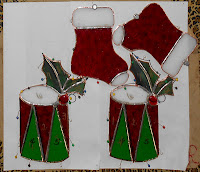 Linda F's Autumn Leaves Window is all cut out and she's done something a little different with it by reversing the normal flow of colors in her double borders.  We almost always use a thin colored inner border and then go back to clear for the last border, but Linda went the other way around.  There's no right or wrong to it but I normally wouldn't have thought to switch things up since I'm a creature of habit.  In this particular case the clear thin border contrasts beautifully with the busy Fractures And Streamers background.   Finishing it off with a nice Autumn-like yellow-orange border is perfect!

Then Mary Grace surprised us all with her Squares in Squares Beveled window that she worked on at home.  The toughest cuts to make in stained glass are straight lines, and by staggering perfectly cut bevels Mary Grace had to be right on the money for all the the hand cut 2x2 squares that she made.  And she did it.  Not only did she do it, but she did it perfectly.   I'm impressed.

Jeanne now has all of her glass attached to her Tiger De Lis and has begun working on putting some texture on her large soldered pieces.  The fun part of texturing is discovering what effect you like best.  It always takes a little time and there's more than a fare share of stumbling about while trying to discover your groove but Jeanne found hers and she's sticking with it now. 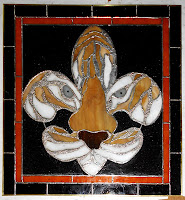 Martha is busy as can be as well, she's currently making a number of suncatchers to use a door prizes.  She's got 11 pieces planned and 9 of them are already well underway (if not cut out completely already).   I have no doubt that Martha will be finishing these before we know it. 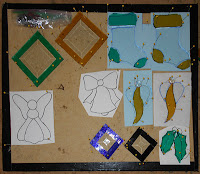 Linda L's Fleur De Lis is so close to completion that I can already feel the sting of Patina in the cuts on my fingers!  This is the back side of her piece and as you can see she's been busy texturing her lead.   With just a few lead lines to go this will most likely be completed two weeks from now.  Linda already has her next pattern picked out so you know she's ready to hang this, sit back, and marvel at a job more than well done. 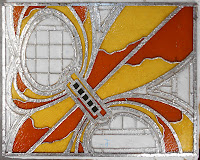 Ann started wrapping her Cross pieces this week and she's made major headway in this part of the building process.  I have little doubt that she'll be tacking this together shortly.  Once that's done she'll square it off and then start adding her three borders. 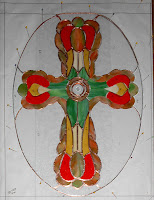 Tasha's Vanity Mirror is now just about completed.  With the mirror cut and two of her three flower sections attached to it all that's left to be done is to attach the bottom shelf.  Once the shelf is attached the front flower set will be soldered along the front edge and then there's only two feet to add to the back to make sure this can't tip backwards.  It's looking great already and it will be completed when Tasha returns for sure.

Terry's latest project is almost ready to be soldered.   She's one of four students who are using  foiled glass sections in their projects.   In this Christmas Bell Window Terry will be completely covering the three bands of the bells and the clappers in lead.  It's going to look wonderful when it's completed and I'm thinking that could happen when Terry returns next week. 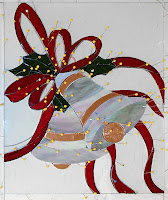 Carol's instantly identifiable Lion's Lamp underwent a lot of soldering this week.   Once the four panels were joined she tinned the square brass cap and got it attached to the top which shored up the lamp incredibly.  We've  added brass channel to the four bottom straight edges and this lamp will surely be completed when we see it next.   With only four lines left to solder and a few touch ups it just has to happen. 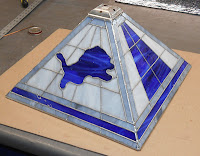 The front side of Rowena's Peacock is now completely soldered and when she comes back in  she'll begin working on the back side.  The second side of this will most likely solder easier than the front mostly because there's no solder to re-melt on it.  We'll see what happens when Rowena returns.

Susan D worked on grinding the two Christmas Trees that she cut out last week and now you can see exactly how the Star she's added fits atop the tree.  I must say that it's a nice addition.  I also think that once these are wrapped Susan will have no problem soldering them in record time. 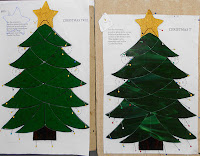 Somehow I didn't get a picture if Sheri's Peacock this week.  I'd swear I did but the images weren't on the camera or the camera card.   All of her flowers are cut and ground now (even though you can't see them in this picture) and Sheri is just about set to start cutting out her background glass.  Perhaps the missing picture is with her missing piece of glass.   Odd things have been happening in the shop-- maybe it's the Ghost of Christmas Past!

Jan's second Bookcase window officially looks like a bookcase now that its all ground and fitting together.   Jan will begin wrapping pieces when she comes back in and with a little luck she'll get this tacked together as well.  Once that's done this window will be next to completed.  there are 30 books in this window and I think I've read 10 of them. 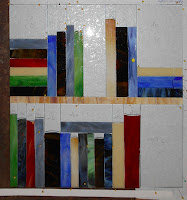 And Cindy is ready to wrap and solder her Cross Suncatcher.  All the pieces have been ground  perfectly as is evident when you look at the center red and green section.  Deviations would show up instantly here but it's all perfect. Once this is completed you'll be able to see all of the white and clear sections much better because it will no longer be resting on top of white paper. 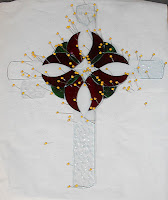 That about wraps things up this week but before we go we'd like to wish all of our readers out there a very happy Thanksgiving. We'll return in one weeks time-- see you then!