If The Cake Is Bad What Good Is The Frosting?

Last week we talked about placing your straight edges against each other and the sides of your glass to help save cuts.  Below is the picture I left you with showing the best way to position those particular pattern pieces. Now I'll show you how they should be cut.

The first step is to remove any extra glass that doesn't have pieces drawn on it.  Next we use a straight edge and a pistol grip cutter score the straight lines.  You may think you don't need to use a straight edge but I can guarantee that you are wrong.  STRAIGHT LINES ARE ALWAYS CUT WITH A STRAIGHT EDGE!  Always.  Were not worried about anything here but the straight cuts so we're ignoring the other shapes.  Just watch the animation and you'll see how to easily separate your pieces. Butting straight lines against each other is a pro tip that every beginner can do.

Lastly, if the edge of your glass is has been filled and you don't have any more edge to use don't draw a new straight line by stacking pieces next to each other and eyeballing it.  Instead, cut the glass with your pistol grip (and a straight edge) to make a new edge on the glass.


Remember:  STRAIGHT LINES ARE ALWAYS CUT WITH A STRAIGHT EDGE.  No exceptions!

Myrt made excellent progress on her Octagon Cross Window-- it's finished!  Everyone in class went round and round trying to pick out a good border color and in the end the only thing that really worked was the same glass that the cross was cut from.  It's a perfect fit and an inspirational window that Myrt did great work on. 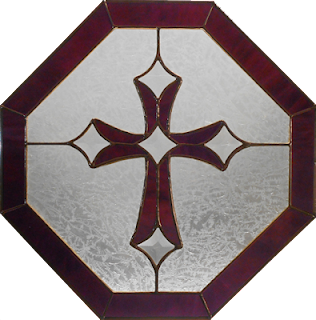 Carol has completed her Detroit Lions lamp and the silver lead lines work wonderfully matching the silver base that it rests on.  I was very impressed with Carol's soldering on the right angle edges because that's always a problematic area for students.  Carol's proved that she's ready to tackle any lamp she wants to make from here on out. 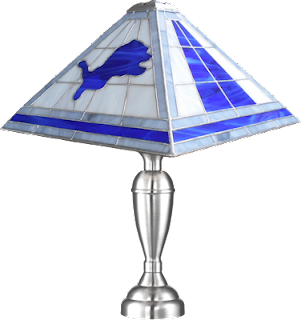 Brenda's Cross and Wine Window was finished this week and the pattern is very popular with all the other students.  There was a small break in one of the border pieces that upset Brenda but it's fixed and no one will ever know that there was a problem.  Why? Because it has been nipped in the bud! 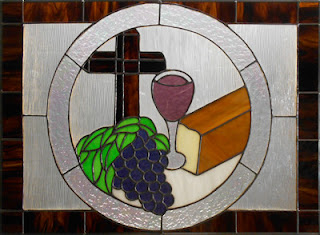 And this Kokopelli Window was completed by Shelley this week and it's a winner.  This one is a little larger than the one that we saw a few months back  but only by about two inches.   Great soldering and carefully ground pieces make the two colors in this window really reach out and grab you. 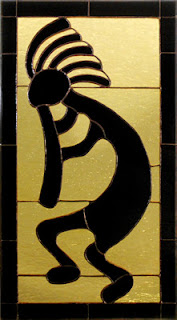 Susan D made this wonderful 3D Christmas Decoration all by herself.  She even drew the pattern itself which is the first step to understanding that if you tell yourself you can't do something you never will.  This is beautiful! 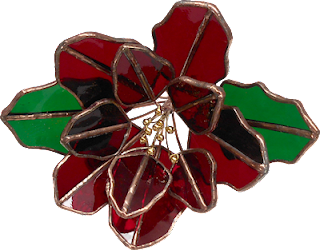 Susan R completed her Two Drum Suncatchers as well as her pair of Christmas Stockings this week.  I've seen stockings before but these are the first drums that we've seen made in class and they are perfect.  I'll get to enjoy them for another week because I found them sitting on the table long after Susan left class.  :-) 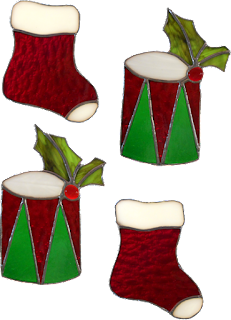 Barbara H's second Bevel Candle Holder is completed and it turned out just as nice as her first one did.  She gets bonus points for getting her four edge lines looking so wonderful because, as I've stated before,  those angled lines can be difficult to solder. 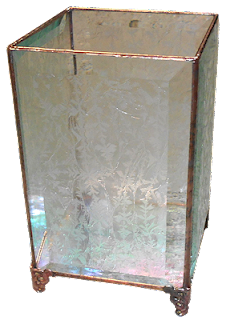 Terry's Christmas Bells are almost complete and boy did she ever catch onto the texturing process quickly.  This is a beautiful Christmas pattern and her work on it only makes it better.  She planned on finishing the back side of this while she was at home but I really hope we get a finished picture of this because I love the design. 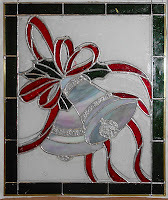 Bonnie's Traditional Geometric Window was cut and ground this week and she's begun wrapping all of the pieces now.   That means that she'll most likely get her border attached when we next see this window.   Soldering should go easily on this design so the end is very near.  Great colors and great work are a hallmark of Bonnie's windows.

Jeannette's Minnie Mouse Window has its front side soldered and is all ready to be flipped over and soldered on  the back side  The wire  accents  will take a little time but next week will certainly see the soldering on this being completed.

Susan R also worked on two Christmas Wreath Suncathers and they're another pattern that I haven't seen done in a long,long time.   They're even nicer than I remembered and I think they'll be very popular with the other students.

Jan's Bookcase Window is almost completely wrapped now which means that if she can just get through about 4 more books she'll be able to tack this together and get some channel on it. 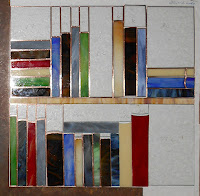 This week we watched Sheri move along to the next major step of her Peacock Window.  With all of the peacock cut, ground, wrapped and tacked together she's placed it on top of a piece of glue chip glass, traced around it and has drawn all of the grid work onto the clear glass.  By cutting the straight lines first she can ensure a perfect fit to a window that's already as perfect as could be.

Ann has the centerpiece of her Cross window all tacked together now and will square it off and start adding her borders when she returns. 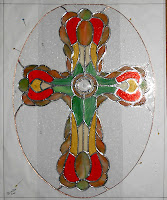 Martha was as busy as she could be and managed to walk out of class with most of her suncatchers ground.  She also managed to cut and grind  a new multi-piece Christmas tree (seen on the right) as well.

Becky S resumed the work on wrapping all of her flower pieces and things are really coming together nicely.  You can really see the details where she has foiled the glass as it allows you to see all of the cuts.

Linda L's Fleur De Lis Is so close to being completed.  There was a minor SNAFU when Linda inadvertently smoothed out some of the texturing that she had completed on the front side by keeping her soldering iron a little too long  on the back side.  Luckily that's easily being fixed.  Oh man, this is soooo close now! 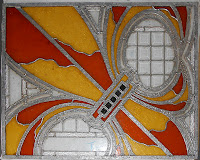 Cindy came in and finished wrapping all of the pieces on her cross suncatcher which means that she'll be able to start soldering this when we see her again.  Consider this finished! 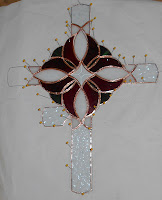 Susan D is making two large Christmas Trees and was busy cutting the holes into the glass where the 'glob' ornaments will reside in.    She's got a nice variety of colors and she's picked globs that are very circular which is something that is often overlooked but so very important.  It looks like Susan will be soldering these before you know it.

Rowenna has finished soldering the front side of her Peacock Window and has flipped it over and started soldering all over again.   I can't say for sure but I think that this side is in fact  moving quicker for her.   I'm calling it--this will be hanging in her house in time for Christmas!

Betty has all of the Fleur De Lis portion of her window cut out along with the pieces of glass which will become the wide leaded sections.  She's grinding her pieces now and the window is moving along nicely.  Sadly, I seem to have not taken a picture of it before she left.  :-(  I promise to show you exactly what it looks like when she returns next week though.

And there you have it.  For the record there are only 3 more classes until Christmas gets here so if any students plan on working on something they haven't started they should start the projects this coming week!