The Inadequacies Of Traditional Imagery

Students sometimes want to take the easy way out to do things and that includes cutting out one large  piece of glass and then breaking it into its respective pieces.  Doing things this way allows you to practically eliminate the grinding process, but there ARE draw backs to this method.   The following pumpkin was traced out by drawing the round pumpkin and then splitting it into five separate pieces.  The end result is perfectly acceptable but you can easily see how the grain of the glass follows through perfectly into each connecting piece.  If this is acceptable to you there is nothing wrong with making the pumpkin this way.  Truth be told, it's a subtle effect but it IS noticeable when you know what to look for. 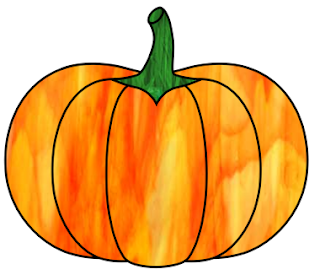 Next we have the same pumpkin but the seven pieces were placed on specific locations of the orange glass.  Yes, it does take a little longer to grind the pieces and fit them together (less than a minute total if you cut off the line as you cut you glass pieces) but I feel that the end result is worth the extra minute. 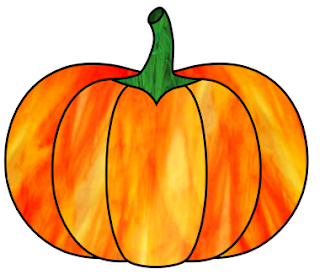 In the picture above each piece of the pumpkin is distinct from its neighboring piece and I made sure that the area behind the stem was dark orange to suggest shadowing.  I also positioned the top rounded part of the stem on the darkest piece of the green that I could find while the rest of the stem was cut from a lighter section.  Yes, the differences are subtle but by thinking out the positioning your pattern pieces you can achieve a nicer more natural effect in anything that you make.   It's a difference that can be hard to put your finger on but most people will prefer the second Pumpkin when given a choice between the two-- It's just more vibrant.


There were times when Roxane asked if she could cut out the feathers in her Mallard window in one chunk and then just separate them, but I suggested that she not do it.   Now her Mallard Window is out the door and flying ever so gracefully.   Roxane's work has been top notch every step of the way on this window and she should be proud of the piece of art that she's created.  What a great job!  What's next for her?  I believe it's house numbers. 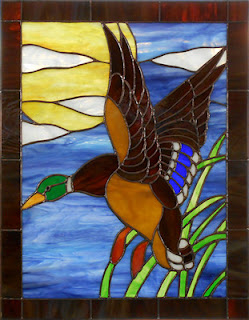 Susan R completed two beautiful snow covered Christmas tree Suncatchers in plenty of time for the Christmas season.  I have no doubt that we'll be seeing more trees in the weeks to come.  Also, it's been a while since I've seen snow and I have to say that this is my favorite kind-- the snow you don't have to shovel! 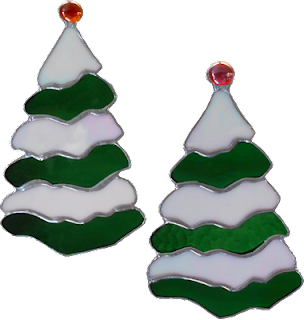 Barbara completed her second beveled box this week leaving her with a few beveled candle holders left to go before she leaves the world of boxes and candle holders.   These are fun and look spectacular but they can be time consuming and a little bit stressful until you know your way around assembling them. 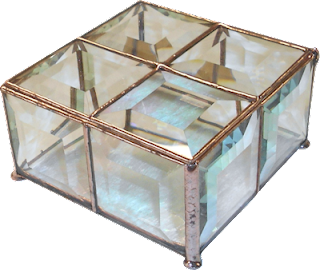 Brenda continued working on her Beveled Transom Window but also got a border cut for her variation of the Wine, Bread and Cross Window.   I also just noticed that she's made the cross 3D.   Nice!

Jeannette has made incredible progress on her Minnie Mouse Window.   With everything now cut and ground she's begun wrapping all of her pieces and will start soldering it shortly.   She wanted it finished in time for Christmas and she'll certainly make it with plenty of time to spare.  There IS a lot of wire work to be done on this window but we'll get to that after everything is soldered, both front and back. 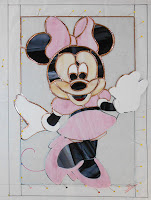 Although it was just started only last week, Terry has this nice large Santa Claus Window just about completed already.   What you're looking at is the back side of this window and since she was able to completely solder the front and get channel on it in just one class I'm sure that she'll be finishing this up when she returns next week Carol now has the majority of her work done on her Lions Panel Lamp. Her grid lines are a little hard to see but once this is tacked together you'll discover that there is far more to these panels than meets the eye at this stage of its creation.  I don't think Carol has much more work to go on this project.

Linda F continued working on her Autumn Leaves window and is nearing completion on it.   She got everything wrapped and tacked together before she called it a day so there's only the double borders left to go on this before she can start the actual soldering process.  That really is THE perfect background glass for this design.

Lynn M  worked on cutting out all of her background pieces and was ready to start grinding when she noticed the time.  Class on Thursday night just flew by most likely because everyone was keeping VERY busy.   I have a funny feeling it will be the same way next week since we're getting close to finishing off a great number of pieces in that class. 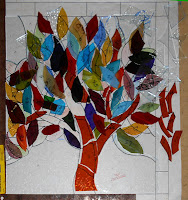 Sheri was faced with a dilemma when we saw her last- keep the orange feathers or change them to green.   After getting input from numerous sources she's decided to keep the accent feathers orange.  While she was in class she ground the remaining pieces and then began foiling.  She's also got her flower colors picked out and will begin cutting them when we see her again.

Shelley got almost all of her Kokopelli Indian window ground and wrapped this week which means that she was VERY busy.   All that's left is for her to skim those black border pieces and attach them so she can begin the soldering process on this project.

Ann now has all of the oval section of her cross window completed and will start wrapping this when she returns.  Her cutting and grinding abilities have really grown because she now completes large scale windows in the same time that it takes other students to make a standard sized window. 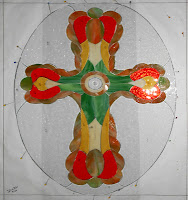 Lara continued grinding her African Woman Window (actually, her ethnicity is a bit up in the air) and by the end of the class had all but the background glass ground.  She'll begin wrapping this and then when it's tacked together Lara will pick out the glass she wants to use for her background and border(s).   With only four pieces of glass making up the background I'm sure that Lara will managed to get some border cut for this as well.

Cindy continued working on her large Cross Suncatcher and is nearing completion on it.  I'm not sure what's next for Cindy but I suspect we'll find out when she returns to class next week. 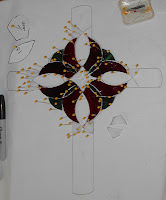 Bonnie's glass didn't arrive in time for her to cut the colored center sections but she was still able to cut out her background glass and then begin grinding from one of the corners towards the center of the window.  It's moving right along and the glass she's waiting for is in the shop now.

Mary Grace finished her Pumpkin Window but while she was cleaning it up she found a large crack in the border that needs to be repaired.  Since she didn't bring any of the glass with her she moved on to making this Beveled 'A' Window.   She got the red background circle section all cut, ground and tacked together and will square it off with a secondary background and then finish it all off with a border.  Be sure to come back next week to see her Pumpkin Window. 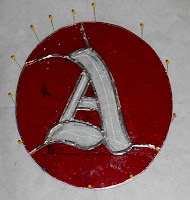 Myrt started a new window this week and it will be built around this cross which she got cut and ground.  She'll be placing this cross into the center of an octagon panel which we'll see take shape when she returns next week.

Rowena has officially finished cutting out all of the glass glass for her Peacock Window.  With all of her border firmly attached she was finally able to sit down and start the actual soldering process.   This window is going to take a lot of solder to complete but wait until this is finished and hanging up-- it will be spectacular.

Linda L has the front of her Fleur De Lis Window almost completely soldered now.   Although the process of 'roughing up the lead' is simple, it is time consuming.  And if you change your method midway through the process, or start to get impatient you may find that the look of the rough solder lines don't match anymore.   Nonetheless, Linda's got this window looking great. 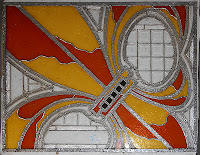 Susan D Started working on a Christmas tree of her own and made fast work of getting it all cut out.  Once this is ground and fitting together she'll decide where to put her red ornaments and then cut them into place for a perfect fit.  The big change in this is the fact that Susan will add a star to the top of this tree which is why it deviates from the pattern at the top of the tree. 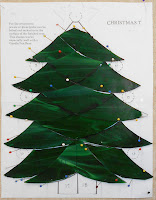 Carol is easily bored so she put together this Butterfly Lawn Ornament in while also working on her Lions Panel Lamp.   Can anyone say the word, 'Multi-Task'?  'cause Carol can! 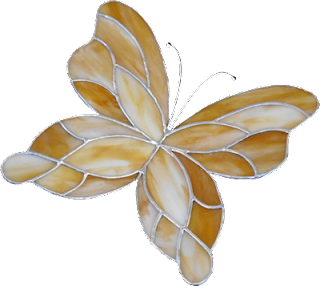 Paula was busy working out the details of putting together box bottoms and even though it's a complex deal she managed just fine.  Once you do three or four of them you start worrying less about whether you're screwing things up or not.  And once you get that fear out of your head the box bottoms practically build themselves.  She told me she was going to leave the boxes in the shop so I didn't take a picture of them at the time thinking that I'd grab a picture the following day but these were the only boxes I could find. ;-) 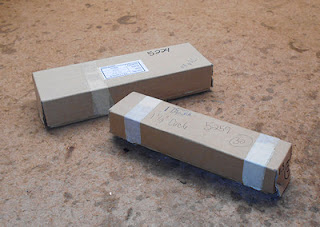 And again, Becky S got away without my getting a picture of her window.   This only serves to prove that I really have to keep an eye on Becky and Paula every single minute!  ;-)

So that about does it for this installment of our Blog.  See you soon!