It's Beginning To Feel A Lot Like Flu Season

It's been since before Christmas that we last had a post here but illness (yes, that flu was killer!) and the holiday season prevented a lot of people from being able to make it in for our last set of classes before Christmas.   Then, to make matters worse, I got sick and had to cancel 4 of the 6 last classes of the year.   Luckily, everything that needed to be finished before the 25th was completed on time so now I'm going to make a series of posts to bring us up to date and into the 2018's.  On your mark, get set, let's go!


Mary's Octagon Irises and Dragonfly Window was completed just in time for Christmas and that made someone VERY happy on Christmas day when they received this beautiful piece.   Mary always works on complex designs and her abilities are growing very quickly  because she's always pushing herself.  Just wait until you see her next pattern. 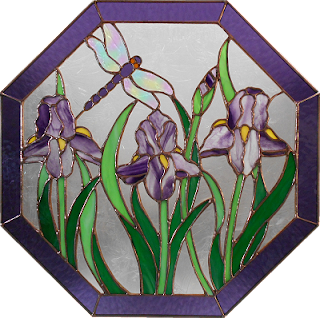 Terry's Flowing Angel looks stunning but there's been a last minute addition to it that Terry did not see coming.  The customer would like a name added to the bottom so we'll show you in our next post how we add a name to a large suncatcher that has already been completed. 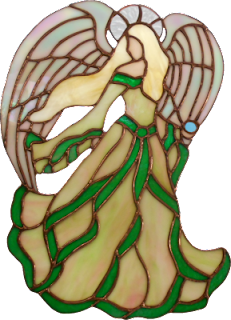 Betty completed another of her Mary and Child Suncatchers which turned out equally as nice as the small panels do.  This is one of the most popular patterns we've seen here in class with so many of these having been made in the span of just four weeks.  Now that Christmas has passed we may see the run on these slow down but this design can certainly be used all year around so don't expect them to disappear! I made a box just before Christmas that is a bit, well, 'out there'.   Many of the students where interested in the odd effect as it was being made so I'm including it among our completed works since our post is small this week.  All of the copper sections that run across the top and down the corners and middle of the box has been achieved with lead.   It's an odd effect but I rather like the flowing earthy design of it.  Below is a picture of the box both closed and opened. 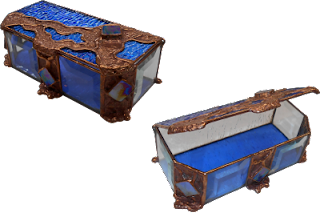 Brenda put the finishing solder bead on her Iridised Bevel Cross Suncatcher and as you can see, you just can't lose with this design. 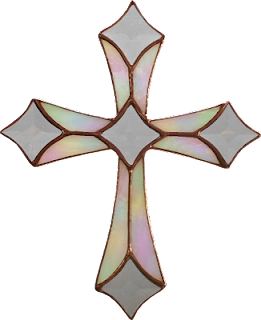 Carol's Alligator Window is as delightful as can be.  She's got it completely soldered (both front and back) and all this needs is a bath and some patina to finish it off.  Hopefully we'll get a picture of this when it's been cleaned up and it has a little light behind it. 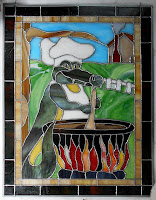 Rowena began on of my favorite Bird Of Paradise Windows.   This small and unassuming project has always turned heads upon its completion and it looks as though Rowena's will do the same.   With the pieces all ground and fitting together perfectly this is already set to be foiled.

Jeannette has almost everything completed on her Christmas Joy Window but the back side still needs some solder.   Alas, we'll be seeing this completed after Christmas has past but next year this is going to be rocking Jeannette's house for the holidays.

Linda F resumed working on her Christmas Ornaments Panel and has all of the subject cut out, ground and wrapped.  Once this is tacked together she'll lay it on top of a single piece of background glass and trace around it all.   Doing it this way will waste a small amount of glass but the time savings that it affords us makes it well worth it.   Inside of one class she'll easily get the background tacked into place and the border cut out as well. 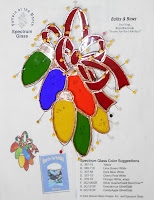 Martha's Oval Day Lilly has almost been completely foiled.  Once that's done the soldering should go easily.  The most important part of this design is that the points aren't cut short along the edges and Martha has achieved this goal.  Yes, this will indeed be an oval when completed.

Bonnie was hard at work on her Santa Face but with the 25th is looming there's still a lot of work to get done on this.   With her priorities in order Bonnie is NOT going to rush this and turn out a sub-par window and that says a lot about the work that Bonnie always does. 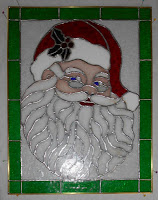 Betty's Noel Panel has been ground and she's now working on foiling all of the pieces that make up this wonderful window.  With the majority of it wrapped I'm sure we'll see the border get attached when she brings this back to class. 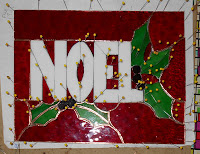 Myrt decided to make another Ribbon Border Fleur De Lis Window and even though she had to retrace a pattern for it she still managed to get the paper pattern cut out and the actual Fleur De Lis cut out of glass.  This will be a quick window for her to knock out since she just finished one and knows exactly how things should progress.

And this is the last post for classes that occurred in the year 2017.    How quickly time flies.