It's Getting Hot In Here

Lately we've had a few Grinding Shield questions so I thought we'd lay down a few tips here in the blog here this week.  First and foremost-- NEVER WASTE YOUR MONEY ON A PLASTIC GRINDING SHIELD!  Some of these come with a built in magnifier as a selling point that makes them sound so much better than they actually are.   See, the plastic get scratched up quickly from all of the glass that it's protecting your eyes from and they are usually fit for the garbage within 2 months of purchase.  INstead of a plastic shield get a holder that you place a piece of glass in.  When the glass gets covered in glass chips just wipe the underside clean with a DRY paper towel.  It's easy and will last you forever.  Also, don't forget to secure the glass with a piece of scotch tape running from the top of the glass and over the metal shield holder to the bottom of the glass.  This will prevent you from accidentally knocking it out of the holder and onto the floor where it usually breaks.

Ok then, let's see what happened in class now.   Terry had completed her Angel as a Suncatcher and was then asked to put a name under it.  Since it was too late to turn it into a window Terry did the best thing she could and made a nameplate that hang from the bottom of the Angel from two chains.  Changing a pattern AFTER the glass has been cut for it (or in this case soldered together) is a very difficult task but Terry handled it beautifully. 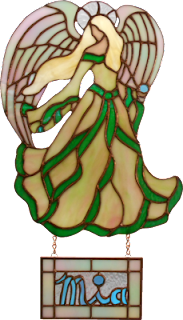 Tracey made almost all of this Madonna and Child Window while she was at home and boy did she did a wonderful job with it.  She finished soldering it in class and as you can see it's spectacular. 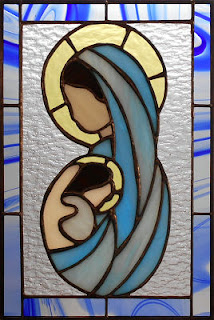 This is Rowena's Bird Of Paradise Window all tacked together with its double border intact.   The strip of white that you see running along the right hand side is just a piece of paper under her clear border.  With the front side completely soldered this is just about ready to be seen hanging in a window! 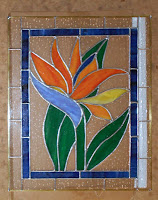 Linda L's Easter Mickey Mouse has all of its background glass cut out as well as its multi-colored pastel border.  I have to say that Linda has done a superb job on this project all around (get it?) 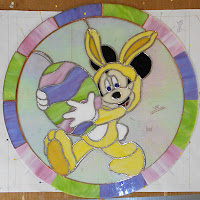 Beth was looking for a quick something to tide her over until she got the actual dimensions for the next window that she wanted to make and she decided to do the same design that is in our bathroom.   In just one class she was able to cut and grind all but two pieces of glass for this project and that's what I call moving fast.  But she never would have gotten this far if I hadn't stood my ground and stopped her from neatly coloring in the pattern pieces that she will throw away after this is completed.  I understand the need to be fastidious but there are times when it just slows you down in a bad way.  Our concern is with the glass itself NOT the paper pattern (as Beth will attest to herself now).

Now this is impressive work.  Melissa got the majority of this Sunflower Window cut and ground while she was home last week.  That's a lot of pieces and she did an incredible job.  She's got her border cut now and has taken this home where she hopes to attach the border and get most of the soldering done on it. 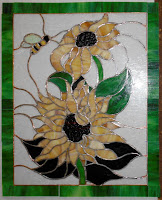 Mary Grace's 'B' Window is coming along wonderfully as well.   With just the final border pieces to cut out she is now able to begin grinding all that she has cut out already.  Remember that we almost always leave the border pieces uncut until the center section is tacked together.  I have to say that this looks great! 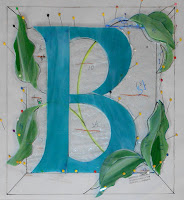 Angie was with us again this week and she was able to tack together the round portion of her  Compass Rose Window and then get a background cut out to shape it from a round window into a rectangular window. 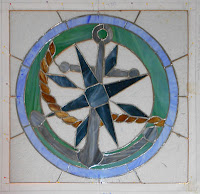 Lara's Starry, Starry Night Window has its first side completely soldered and she'll be moving along to the back side of this when she returns.  I don't think it will be very long before she can call this project completed. 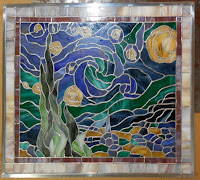 Susan R made major headway with her Mardi Gras Mask Panel and is moving along quickly on it.   As you can see it's fitting together beautifully.

Becky S has almost all of her Peacock cut out but she was a bit unsure of what color to use for the inner feathers along the bottom.  While she was making up her mind about what to do with them she began grinding the pieces that she already has cut out.  I have to say that this is progressing nicely.

Martha's Daylily Oval is all tacked together and she's just begun the soldering process.   Before you know it this will be another finished project and she'll be able to put another notch in her lipstick case.

Terry just can't get enough of these beautiful flowing Angels because, as you can see, she has another one already in the works (but this time without a name plate).  I have to admit that I love the flowing red hair that this angle has! 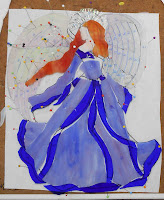 Myrt's second Ribbon Border Fleur De Lis IS moving quicker than her last one did.  This is always the case in re-makes and Myrt is no exception to that rule.

Shelley's Tree Of Life Window is all ground and all she needs to do is tack it together and then cut a few missing pieces.  Once that's done she'll be on her way to a multi colored border! 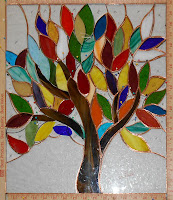 Sheri's Peacock Window is very close to being completed now that she has the front side soldered.  Look to see this as a finished window before you know it!

Tasha was back in action with us this week and she's begun work on this beautiful Poppy Scene Window.  She's considering adding some green leaves to it but we'll see what happens.  As I pointed out with Terry's Angel at the beginning of this post it's always much more work to add things into patterns after they've been been cut out in glass. 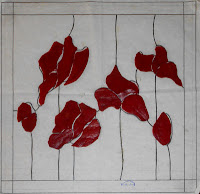 Carol worked on three Beveled Cross Suncatchers this week and as you can see she has them tacked together already.  All they need is solder and they'll be completed.

Brenda has two more Transom Windows that's she's starting to work on.  IN other words, Brenda has begun wrapping the beveled center pieces hat make up her transom windows.   Here's a look at one of them tacked together.

2018 is well upon us and attendance this week was FAR better than it was the week before.  Alas, weather and illness is still taking it's toll here though as you will surely see in our next post.

Posted by Bayou Salé GlassWorks at 12:04 AM