Right after New Years we tried to have classes again but our students were all sick with either colds or the flu.  Some classes cancelled in entirety while others only had had one or two students.   I was looking forward to having life return to normal but illness essentially gave us another classless week where only seven out of thirty students were able to come in!!!!  Since this update is late in posting I can tell you now that attendance was MUCH better the following week.   As the first week stood, here's a look at what our 7 students accomplished after the New Year began.

Mary Grace was able to completed her beautiful Tree of Life Window featuring an assortment of colorful leaves which are framed within a border made from the same colors in random shapes and sizes.  Together they make a lovely window that Mary Grace had a great time making. 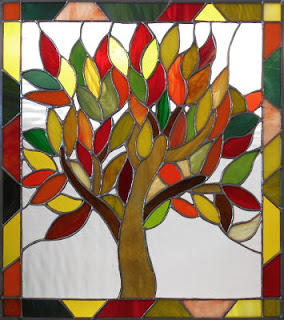 Bonnie's  Santa Face was completed right after Christmas and the workmanship is as beautiful as the window itself.   On Russ' recommendation she left the most of the lead silver but colored the  frames of his eyeglasses in black to give them some contrast.   The effect is readily apparent and really 'sells' the spectacles.  Beautiful indeed. 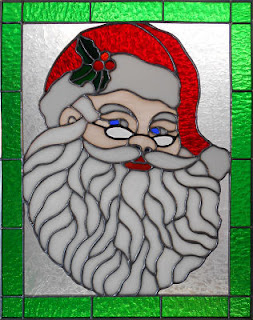 Linda V's Mickey Mouse Lamp has disappeared for a while but it was completed this week and it really turned out stunning.  Featured two different poses alternating across four sides Mickey is instantly recognizable.   Someone else in class has taken Linda's pattern to this so we may very well see this done again before you know it. 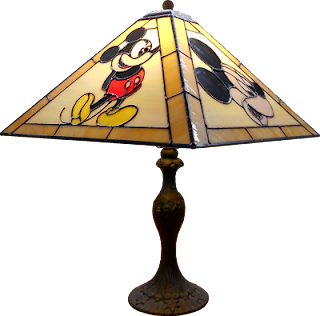 Susan R has started a Mardi Gras Mask Panel and she's certainly not one to be afraid to make a window with a lot of pieces.   She not only shrugs her shoulders at large numbers-- she could also care less if those pieces are small or even tiny.   Let's face it, most of Susan's windows have been barely over a foot wide with close to a hundred pieces in them, this being no exception.   Still, I'm betting that she makes quick work of this.

Melissa started working on a Sunflower and Bee Window and WOW! has she made some incredible progress on it.  This is all ready to be wrapped in foil  and she only has one week of work in on it.  She told me that she thinks things have 'clicked' with her and I'm going to say that they certainly have. 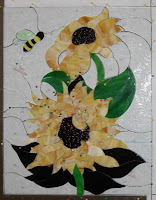 After completing her Tree Of Life Mary Grace got right to work on this elegant 'B' Window.   There will be vines cutting through the letter that she'll cut AFTER everything is ground and fitting together.  This will ensure that both the vines and the 'B' line up perfectly thus completing the effect.  I'll tell you something-- those deep cuts into the 'B' didn't give Mary Grace any problem at all. 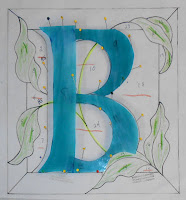 Betty's Noel Window got tacked together and she got the front side of it soldered as well.  She's also begun working on a large Flag window that features three small Fleur De Lis'.   With the FDL's already cut and tacked together she'll be able to cut the background out after the next glass order arrives (and it is in the shop as I type this).

Linda L has her own Mickey Mouse in the works and this one is an Easter Window which is all set to get a background cut out (which shouldn't take long at all).   After that she'll get the round outer border cut out (which will take a little longer than normal since it's round) and then this will be ready for solder.   Doing this early in the year ensures that this will be ready to hang when Easter arrives. 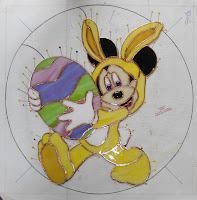 Our second Tree Of Life Window is being made by Shelley and she's just about  got everything ground now.  There are a few pieces that turned up missing that she will fill in after this is tacked together and once that's done (which certainly won't be long from now) she'll be able to work on a multi colored window if she wants to border it that way. 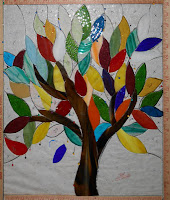 And that was what happened during our first week of classes for 2018.  Our next post will return to its normal size and should be up by the weekend.   See you then!

Posted by Bayou Salé GlassWorks at 8:39 AM