In The Solder Zone

We're running late and I forgot to get pictures taken for our tip this week so we're skipping the tip and heading straight to the many finished windows we have to look at.   Our tip next week will be about maintaining the glass grain throughout a background.

Ok then, up first we take a look at the Seahorses Window that Becky S put the final touches on.  As you can see all of her work paid off in spades!  She meticulously ground around all of the subtle curves and made sure that the sharp 'points' made their way off of the pattern and into her finished piece.  The pointed areas that travel all around each Seahorse would have smoothed out in less skilled hands but Becky handled every aspect of this beautiful window with aplomb. 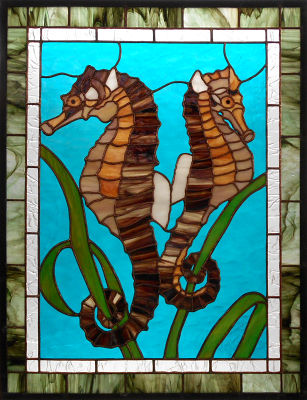 MiMi's second Rose Window also went home this week and the symmetry is not only apparent  but absolutely perfect.  MiMi's a quick learner and as you can see she understands that they key to a beautiful window is perfect grinding.  Coming close isn't good enough if you want your work to stand out in the crowd which this window easily does. 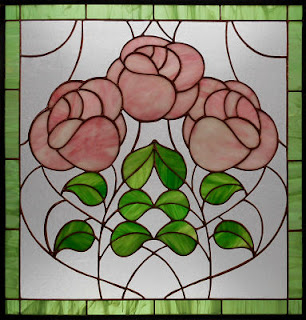 Beth finished her Flower Window and all of those tiny pieces that she's been working with make this a beautifully detailed window indeed. Her border color is perfect and Beth's skills and understanding of the stained glass medium have grown immensely as she made this. 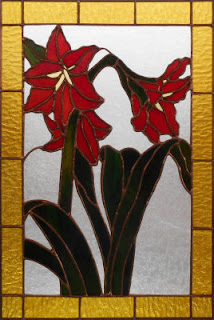 Carol put the finishing touches on her latest 6 sided panel lamp this week.  She colored the lead with black patina and the end result is gorgeous if I do say so myself.  Everything lined up perfectly and that's no easy feat with a panel lamp unless you pay close attention while grinding  and tacking things together.   As you can see Carol had no problem with that. 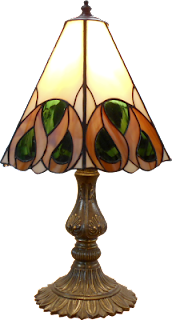 Terry was busy as can be this week as she completed two projects.   Her Humming Bird Window (her own design) was such a big hit that Martha plans on making it next.  When a window looks this good it's easy to see why someone else would want to make one for their own 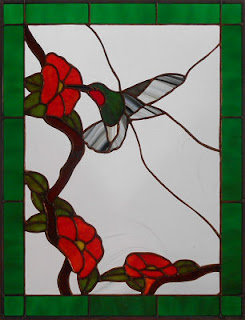 Terry also completed another suncatcher cross which again is another one of her own designs.  She's even got a second one just about completed so there's a good chance we'll see that one in our completed projects section next week.. 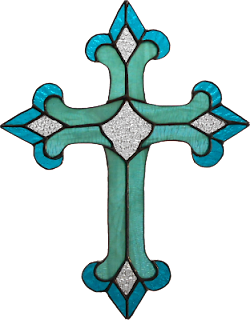 Susan R put the finishing touches on her Chef Window and doesn't it look as cute as can be?  Susan isn't afraid to take her time and her workmanship shines through on this window.  I really don't know what she'll be working on next so it will be a surprise for me when she comes back in next week. 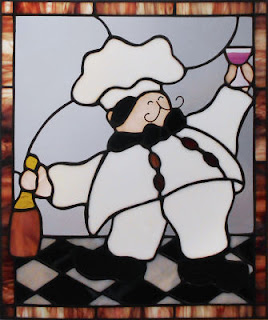 Carol also completed this charming little Ladybug Lawn Ornament and made short work of it indeed. She knows how to get the globs of glass that she used for the spots of the ladybug to fit perfectly by fitting them after the fact. You can't trust globs-- they always come in different shapes and sizes. 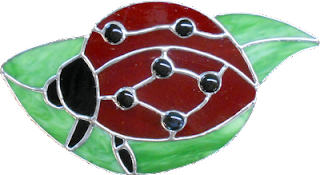 Beth also started work on this beautiful Bird Of Paradise Window and I can see that her cutting is so much better than it has been in the past.  She's really starting to excel at this hobby! 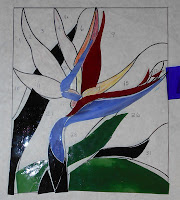 Cindy's Rosie The Dog Window is taking shape as she now has all of the pieces that make up the dog cut out.   Now she's begun grinding and it's fitting together perfectly.   There are a lot of letter in this window so Cindy will end up using the same technique that Roy used when cutting out his letters but it's the face of the dog which will be most important in this window. 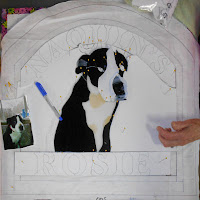 This week we get to see Roy begin work on the family crest window that he drew up last week. This week he started on the top name section which, in one class, is all cut and ground. His letters are all uniform in size and perfectly legible which is exactly what we strive for with stained glass letters.

Linda L filled in four more pieces in her sea floor and then tacked them together.  Once that was done she put a piece of glass under the coral section of her window and cut the rock from it so that the grain runs and matches perfectly throughout all of the pieces.   It's something that you don't really notice when it is done but something that is VERY obviously when the pieces don't line up.  That hardest part of this window is just about through now and next week she'll be able to tack it easy with the rest of it. 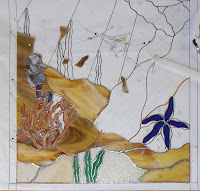 Lara's New Orleans House Window moved along to the grinding phase since everything has been cut along the lower half of the window save for the flowers.   Lara still isn't sure what she wants to do for those 'flowers' in terms of color so getting the bottom half of the house  ground and fitting together will give her a better feel for how all of the colors will look.  Hopefully this will make picking colors a little more easier. 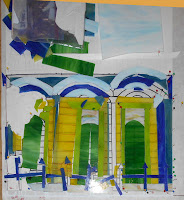 Mary came in and tacked together the center section of her LOVE window and then decided to put a double border on it rather than a single border.   It took a little more time but the end result was well worth it.   She's ready to begin and end the soldering on this next week when she'll have it finished with one week to spare!

Barbara H is back and her two Kaleidoscope Planes are officially together now.   Once they are colored she just needs four small drops of solder to get the landing gear attached and then she'll be able to start working on the 4 color wheels that also form the propellers.

Tracey completed the soldering on her Address Window which means that when she returns she'll attach the channel to this and then wash and color it.  This window is finished, just not cleaned and we'll see this in all of it's glory when she returns next week.

Melissa started wrapping the cloth sections of her Sacred Hearts Window and she's using something we haven't seen yet here in class-- scalloped foil.  The scallop lies only on side of the foil so to use it you pay attention to the back of the glass leaving an even amount of overhang along the perimeter.   You then press it firmly down like any other foil but you have to be careful when burnishing the front side of the glass where the scallops are or you can easily tear them off.   The scallops are  hard to see in the picture but they will become very apparent when this window is completed (Which won't be long now). 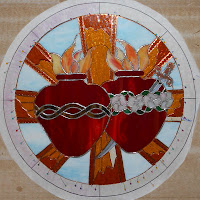 Myrt has her Cardinal pattern all drawn up but she'll need to finish the cardinals themselves before moving along to the background glass and her branches and flowers.   Had the pattern been completely drawn before she started she could have cut everything out at once but that wasn't the case so we're working a bit haphazardly here.  I can still guarantee that it will be beautiful though. 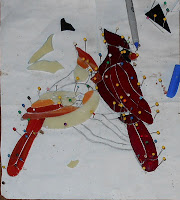 Patrice is making progress in leaps and bounds on her second sunflower window.  Having ground all of the pieces in just one class all this needs is a little foil applied to the pieces before Patrice can find her own soldering zone.

Martha has her Lighthouse And Sailboat Window all tacked together and will be attaching the beveled border when she comes back in.   She's doing a great job on this and making it look easy.  There may be a bevel or two that has to be ground before she attaches them, but I have no doubt that this will all work out perfectly. 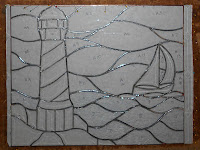 Mary Grace has the front side of her LARGE Iris Window all soldered and has moved on over to the back side.   Now that half of the back side is soldered she may very well complete the rest of the soldering on this when she comes back in.  Since it's a large window I think it will be washed and colored in two weeks though.  There's a lot to this window some things just can't be rushed. 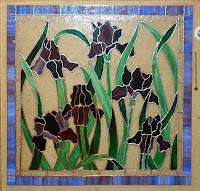 Susan D is about to start a Tree Of Life Window but she made a small detour this week as she began working on the leaves for another Flower Cornucopia Trellis Project.   You can see that she has a lot of completed pieces in this box which means that she, as always, is doing a great job.

And that about does it for this post.  Come back in 7 days when we unveil all new finished projects and another tip of the week.