Looking For A Blog Title

Softness, gracefulness and fluidity are very import in the art of stained glass.  We like to see lines that flow and merge without sharp or odd angles.  It's the difference between good stained glass and bad stained glass. We want curves that are exaggerated because by the time we add an eighth inch of lead on top of them they tend to flatten out and look considerably less appealing.

With the flower below you can see how you can start with the most basic of ideas and then flesh it out by adding curves and amplifying existing curves.   The difference is truly night and day, don't you agree? 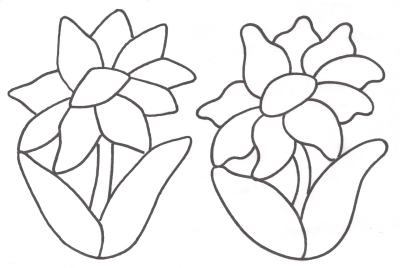 Next we have an example of why we need to have lines flow gracefully.  The Heart on the left is a sharp and angled mess.  Pay attention to the curves you cut.  An arc shouldn't look like half of a stop sign.  It doesn't matter of you have an eye for art or not-- EVERYONE (especially the people looking at your work) can tell when a straight line is rippled and when a curve has points along it.  Take your time and do it right. 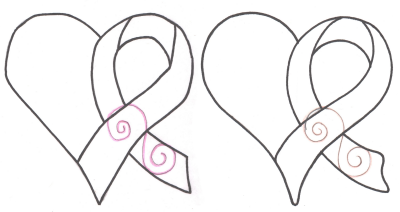 Well then, I had thought that Cindy was leaving the lead on her Address Number Plaque silver last week and that we wouldn't see it again but she brought it back this week all washed and colored with black patina.   The contrast of the black against the clear really added a lot of definition to the numbers and I have to say that this did indeed turn out very nicely. 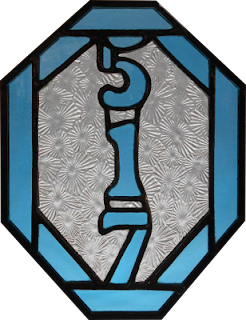 Our next four completed projects were each made by Rowena who is on a serious roll!  As always, her Bumble Bee Lawn Ornament turned out lovely indeed. 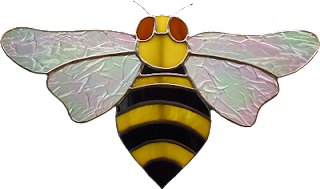 Then she made a new Lawn Ornament that we haven't see before.  There's no mistaking that this is an Iris and I have no doubt that we'll be seeing more of these being made.   I love how the stake doubles as the stem of the flower!

This UL and pepper suncatcher has been done before but it's the first time that Rowena has made one.  You can't tell that from the workmanship though, can ya?  :-) 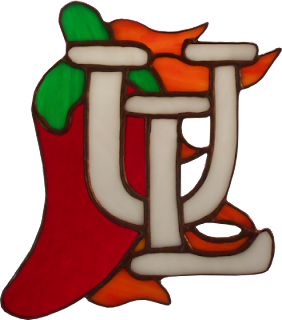 Here Rowena ends her spree of completed projects with an original ST logo from her old Alma Mater.  Featuring the school colors and a color guard flag behind the logo, Rowena turned out a great finished gift this week. 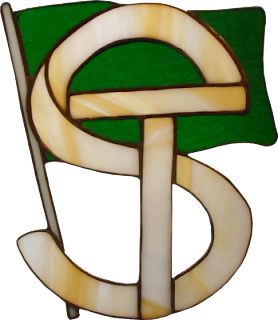 Let's start off our works in progress with Cindy who has begun her somewhat large Rosie the Dog Window.  As you can see she's working from the inside out as we always prefer to do when we work in sections.   Once the dog is ground she'll tack her together and then finish off the top name and the background pieces.  Once that's all tacked together she'll move along to the name on the bottom and finally the borders.  Rosie is looking good already and she hasn't even been ground yet! 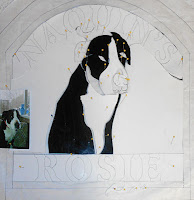 Mary is taking a little break from her Dreamcatcher Window so she can make a quick gift that needs to be completed in two weeks.   She started cutting out a LOVE Window this week and by the time class was finished she had it both cut and ground.   In fact, she even had one piece wrapped in foil already as well!  This will certainly be completed in time.

Jan's Poppies Window is really taking shape now.  Next week I'll demonstrate how her background glass was cut from a single piece of textures glass the exact size of the background that she needed.  One small piece had to be sacrificed (see the red arrow) to do this but we will easily line up another piece so that it will blend in perfectly.  the end result will be a swirling pattern in the background that remains unbroken.

Beth filled in the missing colors in her paint by number dreams (that's a Jackson Browne reference there) and then filled in her missing pieces as well.  After getting her border cut and tacked she got her channel attached and then completely soldered the front side of this Flower Window masterfully!  Her soldering skills have grown by leaps and bounds this week and I think she should be very proud of what she accomplished.  Slow and steady ALWAYS wins the race.

Speaking of winners, Shelley has begun working on a new project that I predict will be a winner indeed.   It's hard to see right now since she's just begun cutting class, but the scene is of two buxom ladies enjoying some wine.   Just wait until you see this window unfold-- it will surely bring a smile to your face.

Then we have Terry who is officially soldering the back side of her Humming Bird and Flowers window which means that it will surely be completed the next time we see it.   If class had run just a half an hour longer we would have seen Terry finish it this week. 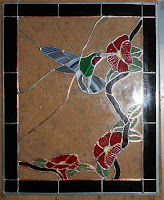 With her borders completely attached and the front side soldered, Tracey is close to finishing off her Address Window.  She took her time soldering the first side and although all she can see are mistakes I have to give credit where credit is due and say that her soldering is FAR better than the soldering you find on stained glass that I see being sold in stores.  With each project Tracey gets better and better and I love the progress she's making.

Myrt is in the midst of cutting glass for her Cardinal Window and she's decided to add three flowers to the pattern.  Since they are well removed from the Cardinals themselves this will be an easy addition that we'll see sketched into place upon her return.

MiMi left her with her Flower Window under her arm (figuratively, not literally) and planned on doing some more soldering on it while she was at home.  The next day I saw a post by her on Facebook showing a picture of her window that also said the that soldering was finished!   That means that all we need to do is add a zinc channel to this (30 minutes work at the most) and then wash and color it.  And I will say that MiMi's soldering is impeccable. 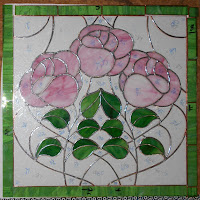 With just two more cloth sections to grind into place (the 7 and 9 o'clock positions) Melissa's Sacred Hearts Window is very near completion.   The border will go very quickly (as always) and before you know it Melissa will be starting a new project.  I love her attention to detail-- Melissa is not afraid to go back to the grinder three or four times to achieve a perfect fit. 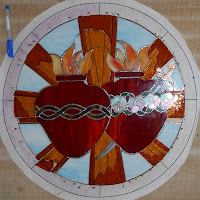 Next we have another window that will most likely be completed when we return next week.  Susan R's Chef Window has all of its pieces in place and it's nearly soldered.  There's a little bit of wire work to go but we'll easily handle that upon her return.  I'll bet Susan will thrilled to finish this and get started on a new project. 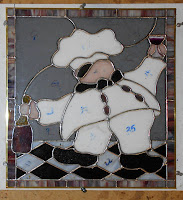 And in the end the lighthouse you take is equal to the lighthouse you make.  Martha has nearly got all of her wrapping done and she will be adding a beveled border around it once it is tacked together.   Very elegant indeed and going together quickly if I do say so myself. 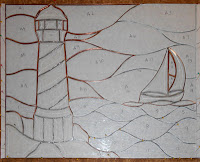 So that's it for this week.  Come back next week when even more is accomplished and the curves we see are more curvaceous than ever!