Looking For Lysol In Lafayette

Here's a quick tip that beginners don't seem to pick up on until they've done a few pieces.  New students have a lot on their plate as they deal with remembering all of the rules for each of the steps that they try to accomplish.   Sometimes they get too excited when something fits after they've ground a piece and immediately move along to the next piece.  Remember this though--  Just because something fits it doesn't necessarily make it correct.  Once a piece fits into position make sure that it resembles the opening that you have it fitting into.  I'd rather see a piece be the correct shape yet be a little short rather than a fit that doesn't match the shape at all.  Remember that a square peg can go into a round hole if the square is small enough, but that doesn't make the peg round.  Pay attention to your shapes and your windows will look better than ever.  In the example below, the red piece fits into the opening but it certainly isn't round and needs to be re-cut. 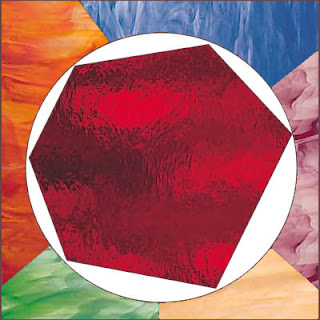 So first up we have Jan's latest Crucifixion Panel.  It has a wonderful simplistic look but it's anything but simple to make.   These are some tiny pieces that require some finagling to get to fit but the end effect is obviously very powerful. 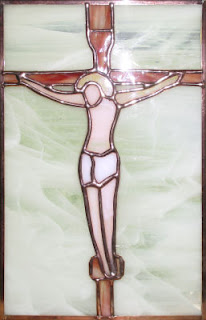 Belinda printed out a Heart Sunflower from the internet and then added a few leaves to add some more color to it.   Here you get to see it for the first time already in its completed form.  Not bad at all! 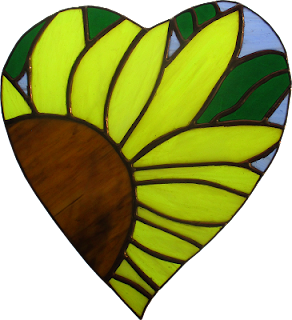 Ann's newest Cross Suncatcher utilizes color perfectly.   The clear baroque glass pieces have just a hint of green in them which match wonderfully with the solid green that she used as an accent color.  Or is it perhaps the other way around?  Either way, this works! 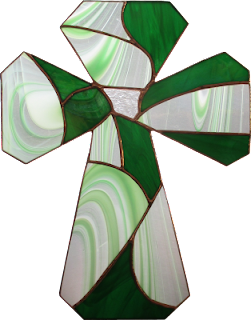 Jeannette completed two beautiful Suncatchers this week.  The Bumble Bee is her best one yet and I love that she used a piece of very soft amber glass for the wings.  Sometimes bending the rules makes something all the more perfect.  And, of course, her Humming Bird suncatcher is also perfection. 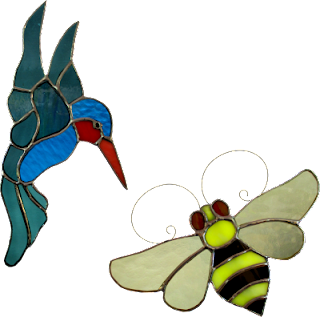 Here's a look at Linda L's first American Flag Panel.   I'm pretty sure she'll be making at least one more of these once her daughter sees it!  And Betty is already cutting glass for one of her own. 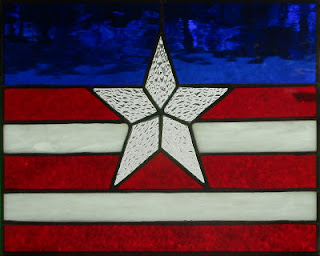 Mary Grace finished her Flower Candle Votive project and it also really turned out nice.  Alas, all of the photos I took of it from straight on were VERY blurry so this angled one is the best I can show you.  :-( 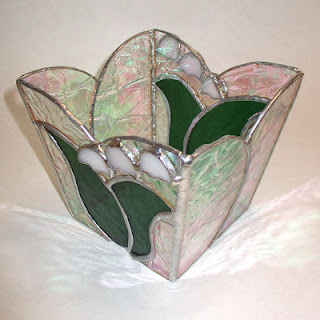 Betty made this wondrous Wise Owl utilizing a lot of scrap glass in the process.  I have to say that her soldering on this piece was phenomenal if not even better that that!  Another great job all around. 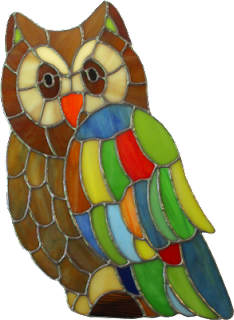 Susan R took the standard Mixed Drink Suncatcher and turned it into a Lawn Ornament by attaching a stake to the back.  She's got a second one in the works because why settle for one mixed drink when you can get two!  Look how you can see the pink part of the drink swirling in the glass. 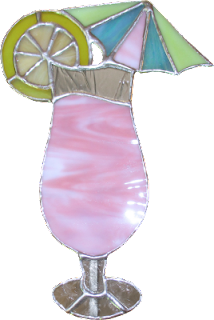 Betty also made her own rendition of the Sunflower Panel that Linda made last week (and possibly even the week before).  Now that Betty has her own Wrought Iron Post that these fit into I  suspect that we'll see more panels of this size made by Betty in the weeks to come. 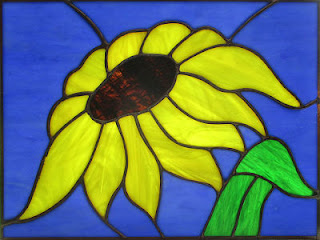 Our final finished piece was made by our newest student, Beth and yes it's a Butterfly.   She had no problem at all cutting her glass and grinding it to make this beautiful blue sun catcher.  She's still not entirely sure what she's making next but we'll see what she decides when we return in our next post. 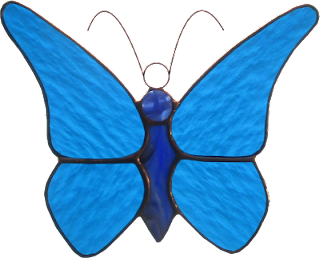 Barbara H got her clear baroque background glass cut, ground, wrapped and tacked into place this week which means that she only needs to solder this window and then add some channel to finish it all off.   Perhaps that will happen next week...

Cheryl decided that she was going to work on an address Window for her first project and this is it.  She got both the numbers and the background glass cut out which means that she's ready to move on over to a grinder upon her return.

Helen worked on an LSU Window and after she got her three letters cut out she worked on cutting out her clear background glass as well.   It may be hard to see but everything is officially cut save for the border (which is cut after this is tacked together) which means that she'll also be at the grinder when she comes back in.

Jeannette's latest window is a Heron Scene and she only has to get some green leaves cut out before she begins grinding.  Look how wonderful that sky flows from left to right.  That's nice glass placement right there because you can actually see clouds in the blue sky. 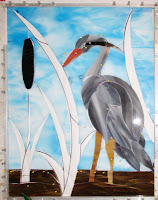 Now here's something that you don't see everyday.  Lisa is working on a Monogram Alphabet Panel.  The curves and lines in this symbol form all 26 letters of the alphabet.  Lisa has used clear textured glass and has this ground and ready to be wrapped.

Here's another 12 x 9 panel that Linda F is making.   It's obviously a Halloween panel with a little bit of a scary twist in its smile.  Wait until you see what glass she's going to use for the pumpkin-- it's not going to be what you expect at all! 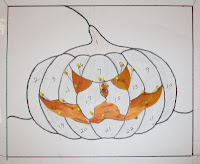 Cindy's on the home stretch with her re-made Bird Window.   It's all tacked together and now she's working on soldering it.  This will be done before you know it. 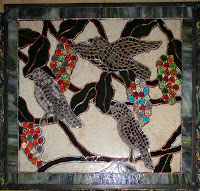 And MiMi's Combat Vet Window is in the process of getting its right wing fitting together as she works each feather at the grinder.  The right piece of blue background glass perplexed us for a minute or two because the right side of it was off by quite a bit.   Rather than grind it down we waited to see what may shift here and there and a little while later we saw that it was the bottom edge that was off and with just a small quick grind everything dropped into place perfectly. 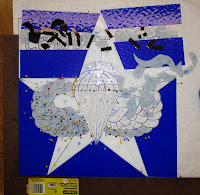 Here's Susan D's Address Window all ground and fitting together perfectly.   If you look closely you can see that she's begun wrapping her pieces in copper foil which means that this will surely get a border attached when we next see it.  See that number?  Remember it when you're playing the lottery...

Linda L's Celtics Logo Window is really moving along wonderfully.  Look at those perfect curves and those wonderfully complex letters!   You can tell she's been at this stained glass thing for a while now! 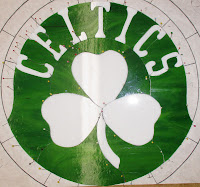 Tracey's Cardinal Window is all ground and looking rather epic if I do say so myself .  She's removed the branch from the upper left and went with a lead line coming out of the beak.  It's a cleaner look so I believe it was a good decision.  Tracey's taken this home to wrap and she'll tack it together next week and add a border. 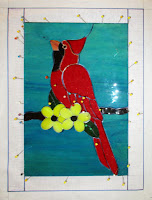 In less than 2 classes Roxane was able to wrap all of the pieces that she ground for her Angel Window.   When she comes back in she'll tack this together and then get some background glass cut out.   I can't wait to see what she picks out because I'm unsure if she's going to do an empty background or maybe something that resembles the sky and clouds.

Shelly finished grinding and wrapping her Mixed Drink Suncatcher and would most likely have finished it during class but she had to leave early and we didn't get to see it completed.  But next week will be a different story entirely! 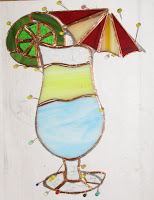 Last but not least we look at the three projects that Angie worked on.   Her two Butterflies really only need to be attached to a stake so she can put them in a flowerpot and her Angel Wings/Heart Window only needs to be soldered for it to be completed.  She's talking about making a Great Pumpkin Window next so I think she feels that these will be finished upon her return- and I believe they will be!

And there you have it, another busy week in the shop all accounted for.