Get Your Nose Out Of Your Pumpkin

Annette's Butterfly Mobile is the bomb!   She had wanted to make something that no one else had done before and this fit the bill.   I had assembled one long ago so I had an inkling of what would be involved.   It WAS a lot of work involving tedious and precarious balanced soldering but the end result was certainly worth it.  I'm including a video link so you can see it in action but this honestly needs to be seen in person to appreciate how truly stunning it is. 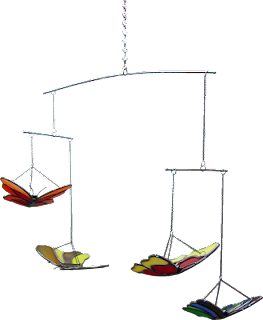 Let has her Bathtub Lady completed and it's a definite winner.   Her thin accent border accentuates the rest of the window perfectly and makes this a delight to look at.   I know you can't really see it in the photo because the bubbles are so small but she's cut them out of iridized waterglass which makes them look like actual soap bubbles!  Little things mean a lot. 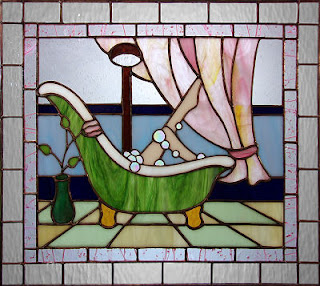 Betty made this blue and clear abstract window quickly and efficiently.   In the end she decided to leave the lead silver because, let's face it, silver and blue just work so well together. 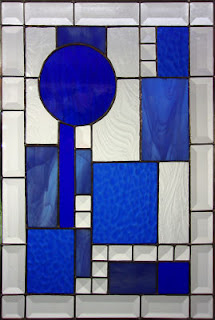 Susan D is on a  three dimensional project spree and her latest piece is Pumpkin consisting of six sides.   The pattern is her own design and she assembled this completely on her own.    She's got those mad skills! 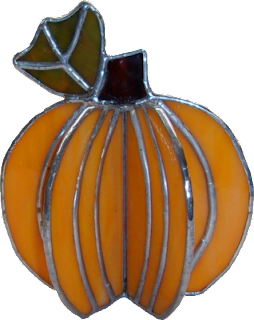 Cindy's latest Spiderweb Corner Decorations have been completed in time for Halloween with plenty of time to spare.  She always makes these in a set of two-- one for each top corner of a window, but I'm pretty sure that she sells them separately as well. 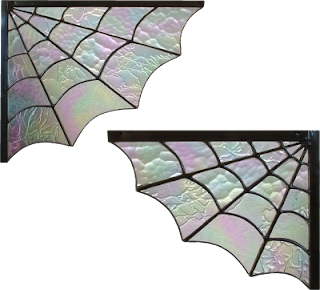 Ann's rendition of the Angel Wing Heart is stunning and changes things up by featuring an iridized white heart.   She's position the glass perfectly so that the light streaks of pastel colors run in a prefect vertical line.  It's a great look and a great Heart! 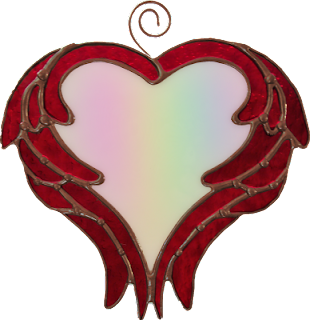 Jan finished her second Plate Window and it's a perfect match to the first one. Soldering the reverse side of this can be VERY tricky since the window is literally raised off of the table when soldering the second side.   This makes 'run-throughs' all the harder to avoid but Jan had only two of them which were easy fixes.  I always say that slow and steady is what gives you a great solder bead but you can go too slow and end up messing up your front side.  It's all about understanding how the lead melts and knowing when to move. 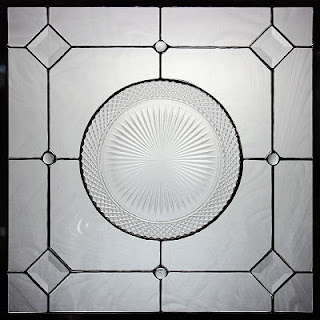 Cindy's latest Pastel Unicorn features iridized glass with a painted eyeball.   These sell like hotcakes for her.  She also wrapped a pewter Mickey Mouse key chain fob in foil, cut some background glass to go around it and then soldered it all together to make a little Mickey Mouse Suncatcher. 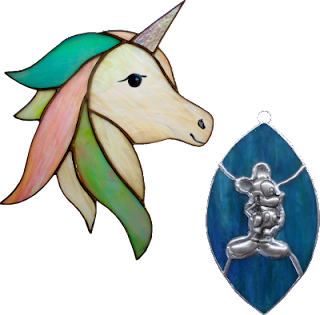 Sheri is hard at work on a double Sunflower Oval that she has an order for.   She's already got it all cut out so she's well under way on this project already. 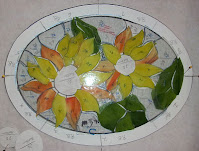 Linda F is back after a bit of a 'vacation' (that's definitely a bad word for it) and although I was unable to spend any time with her (this week) she was able to get really far along with her Birds On A Wire Window.   There are a lot of tiny pieces on this but Linda is just looking at them as bird parts and not being daunted by their size.

Susan R has her large Frog Lawn Ornament all  cut, ground and wrapped.  She even used yellow globs for the eyes (which I thought would be the best choice) all on her own before I could even mention it to her!   She'll easily have this finished next week which means that the one loose front leg is going to be put into its correct position and the frog will then look complete. 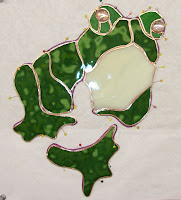 Let has begun a Geometric Window of her own and was surprised to learn that the only paper pattern pieces that she needed to make this were for the four pieces that make the center geometric shape.   From there on out we just cut glass into rectangles and fit it all together. 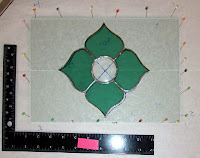 June's Sewing Machine Window is really moving along.   All of the subject matter (the machine) has been cut and she's been working on grinding the sewing machine to fit before she decides on the clear glass that will become the background. 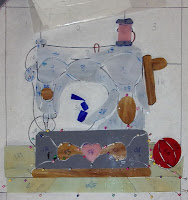 Lara wanted to open up her Peony Window a little bit and make it a little less crampt.  To do that she's removed the flower bud  and the branch with two leaves springing from it in the upper right of the window.  This gives the large Peonies some breathing room and also shows off the gorgeous pink streamer glass that she's filled in her background with. 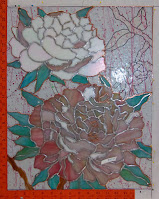 Betty is also making a Hummingbird piece for someone and got the humming bird ready to be tacked together.  The most observant of readers may have spotted that she's building this on the pattern to her Blue and Clear Abstract Window that we looked at earlier. 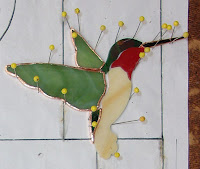 Kerry has his second Umbrella Lady ready for the rain to begin.    She's been all cut and ground and just needs a some wrapping and tacking before Kerry cuts out the seven remaining background pieces that will be cut from glass that resembles rain.

MiMi's repair work is teaching her just how great a glass crafter she is because by disassembling this window she sees first hand just how awful other people's cutting and grinding can be!   The gaps are grating on her nerves but they are smaller than what they originally were since we've shrunk the pattern by almost a quarter of an inch. 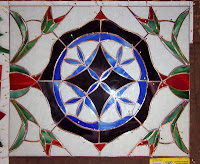 Barbara's Cottage Window has been cut out and completely ground and wrapped.   There's a deadline on this piece but I can safely say that there's no doubt that she will have this finished when she leaves class next week because she's already sent me a picture of it all soldered and just needing a brass channel to finish it off! 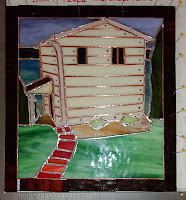 Judy's Winnie The Pooh Window got its border attached and then she soldered the front side.   After that there really wasn't much time left in class but she still managed to flip it around and work a bit on the back side.   With about a quarter of the second side soldered I'd say that it's safe to say that she'll have this completed upon her return. 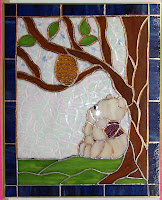 Ann's Wrought Iron Cross is very near completion at this point in time.  All this needs is a little bit more solder and then she'll be able to take this along home with her.

Susan D, in keeping with the 3D motif, has another Beveled Star under construction.  It's hard to believe that this assortment of triangles can assemble into something so elegant and beautiful. 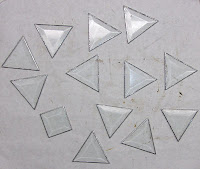