My Hive Has A Bee Hole

Kerry's Umbrella Lady certainly steals the show.  His border glass mixes the two dominant colors in the window and just ties it all together in the most perfect way.  Jeanne has posted pictures of this while it's been under construction and Kerry is all set to begin another Umbrella Lady with a different color scheme as a custom order when he next returns.  It's always nice when your hobby can help pay for itself! 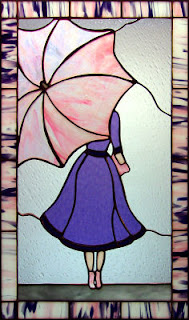 Barbara has her first Panel Lamp finished and it looks amazing.   She found an antique base that has a unique look to it which matches the copper finish that she applied to the lead of the lamp.   The end result is beautiful and Barbara says that she may make another panel lamp sometime in the future. 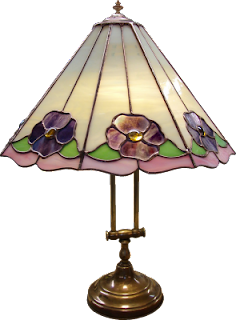 Susan D is now a Bevel Queen.   Here we look at her 3D Star which creates a sparkling swirl of miniature rainbows when the star is spun in direct sunlight.   As with all 3D projects this can be tricky to make but Susan handled it wonderfully and it is rock steady. 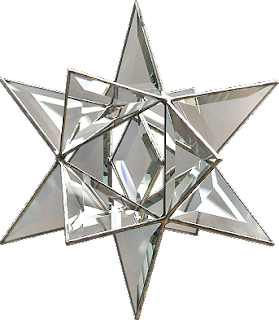 Now, if Susan just made a beveled star we wouldn't be calling her a 'Bevel Queen' so to ensure she deserves the title Susan D also made a Linking Beveled Spinner.   I've animated it slightly so you can get a pretty good feel for what this actually looks like.   Because it's made of bevels this also throws off a multitude of little rainbows when it's in the sunlight.  3D is IN!

Cindy's Pair of Wood Ducks have been completed and Cindy 's modifications to the original pattern fill it in it out with more greenery.  After it was finished and we took this picture Cindy said, "Okay, it's on to the next window!!" 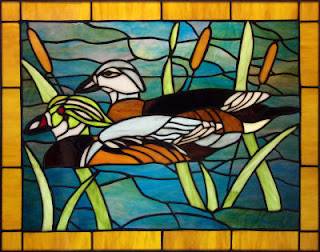 Do you remember that Faux 3D Cross that Annette began last week?   Well here it is all completed and looking spiffy if I do say so myself.   Annette also almost had her Butterfly Mobile finished but the fishing line we were using to suspend the Butterflies wasn't working so she's going to bring in some fine chain next week that should do the trick. 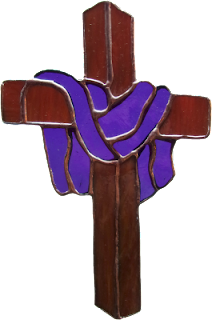 Linda L has two more Santa Panels completed just as I said she would in our last post.   With three Santa's now out of the way Linda has moved on to three more panels featuring a different scene (which you will see later on in this post). 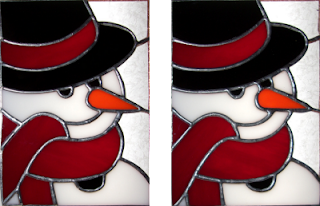 Cindy also got another Bowl made this week and she's at the point where she can make these in her sleep.   There's no pattern used to make this project-- just a little artistic vision.  It may sound scary but more than anything it's liberating to create. 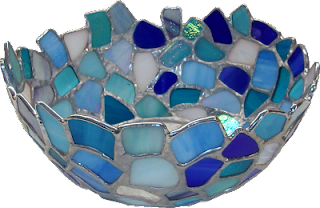 Susan R is working on a Frog Lawn Ornament with a front leg that will stand out to give it a slight 3D effect.   Her green mottled glass choice is perfect for this application and the frog already has a realistic effect whether its leg is three dimensional or not.  I wonder if she'll use glass globs for the eyes... 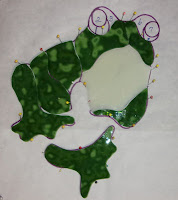 Melissa decided that her house needs an Address Window in front of it so I drew up a pattern that she liked over the weekend.  When she came in on Wednesday she traced it all out but ended up deciding that she couldn't quite make up her mind on a color scheme.   She did know that she wanted dark (black) numbers on a light (off white) background so she cut out the center oval where the numbers reside.   She'll be going through all her glass that she has at home to see what she might already have that can be usable in this window.  Next week we'll see some color to this!

Here are three Reindeer that Linda L is making as the third panel for for three Christmas Lanterns.    We've also agreed on a specific Christmas Tree as the fourth and final pattern so once these cute Reindeer are finished Linda will move onto Christmas Trees.

June's got her Sewing Machine all cut out and is ready for the surrounding glass to be cut into place.   She's making short work of this window and it's already drawing attention from students in other classes. I guess it's true that you reap what you sew.  :-/ 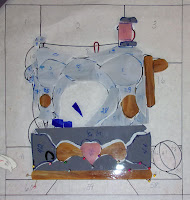 Cheryl's got all of her Cardinal Window cut out and is now ready to head on over to the grinder.  I have to hand it to her because her cutting is getting better and better especially with this window.  It's looking good already even if she thinks it looks like a red hot mess.  We're always our own worst critics. 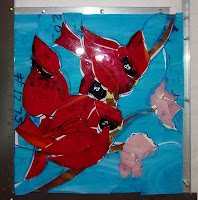 Judy finished wrapping all of her glass and then tacked her Winnie The Pooh together.   At that point in time class had just about ended and Judy was ready to call it a night.   She'll be well rested when she returns again next week to get her border attached and then begin soldering her window. 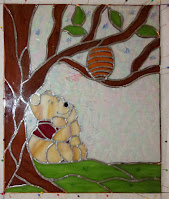 Shawn is REALLY on a roll here because she's completely cut out the top 1/3 panel of her Hera Flag Window.  Next she'll wrap this and tack it together which will then allow her to get to the final section of this sweet window. 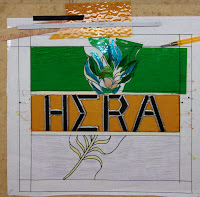 Jan has her Plate Window all soldered and ready to get a channel attached so she can then wash and wax it.  It's safe to assume that this will be finished when Jan returns next week. 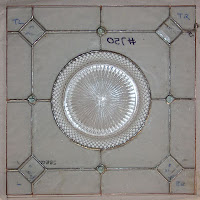 Let managed to get her Bathtub Lady all tacked together and by the time class was over she's gotten two borders attached as well as almost completely soldering the front side.   I love her thin accent border-- it's perfect for this window. 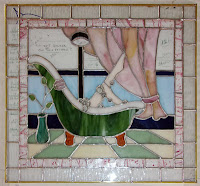 And this is one of the Unicorn Suncatchers that Cindy makes and sells as fast as hotcakes.  There's only six more pieces of glass to wrap and then she can solder this. 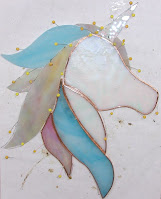 Martha has the top of her Wedding Box 100% completed and has the sides to the box part all cut ground and wrapped.  There are essentially 8 lines of soldering left for her to do and then she'll be able to call this completed. 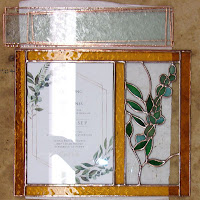 Sheri  has her colors figured out and is now getting ready to begin cutting glass.   She's started cutting out her paper pattern one section at a time and as you can see she's going to be working on the glass for her top Peony first. 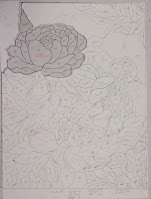