As always, Melissa's newest window is another tour de force.  She pays so much attention to her glass choices basing each new color off of a previously used color all the while paying close attention to its contrast, placement and its texture.  Her final border shows what she aims for by matching both the Heron's blue feathers as well as the purple irises.  Don't miss the ripples in the water and the texture on her background glass. 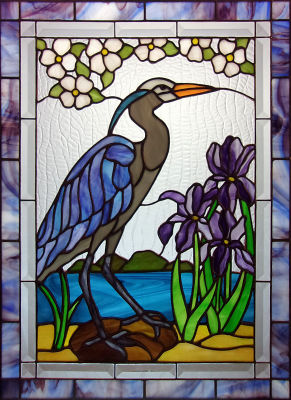 Cheryl's Tree Of Life Window is officially finished and it also looks great.  Cheryl was almost to the point of giving up on this window multiple times but each time she thought she couldn't go on we re- grouped, cleared our mind, started fresh, and most importantly: remained focused.  The end result speaks for itself. 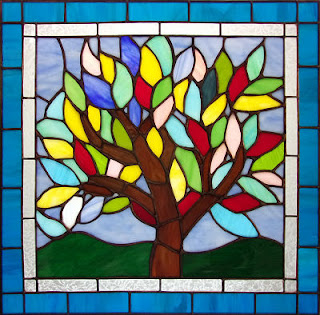 Susan R's Geometric Suncatcher has a unique 3D effect but it really came together when she hung a crystal from the center of it.  At first I told her she'd have to fill the center with clear glass to prevent all of those hinge points from folding, but we had to come up with a better plan when Susan said that she wanted to hang something in it.  We solved the hinging problem by using strips of rebar and now this is as sturdy as can be.   I'll be going over exactly how we fixed this issue in our next Hints and Tips post. 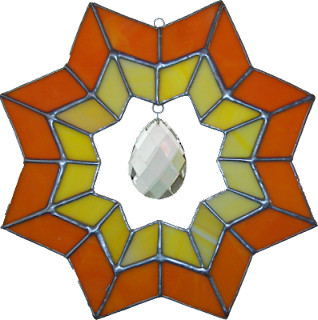 Linda L got two Santa Panels and a Micky Mouse Christmas Panel completed this week which means that her three lanterns (which these fit into) are starting to come together.   These were finished quickly in class and left Linda with more than enough time to begin two different panels which you'll read about a little later on in this post. 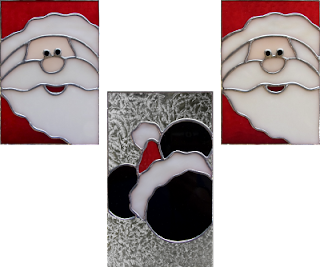 Linda L also completed this suncatcher design that came from a pattern book that calls this a Starcatcher.  Linda made this out of eight assorted clear textured glasses and centered it off with a half in by half inch bevel.  She wrapped it in silver foil and left the lead silver for effect.  This pattern is a great way to help clear out your scrap box! 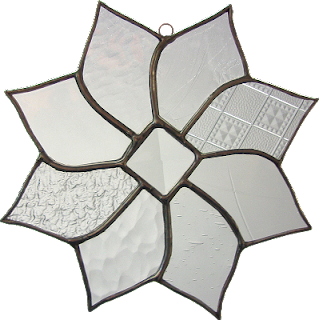 Annette had this Cross started for the longest time and  when she found that she needed a quick gift she hauled it out and finished it off quickly.   Sometimes things work out for the best when a project gets put aside.  Every piece of glass in this is iridized so it really shines when it's in the sunlight. 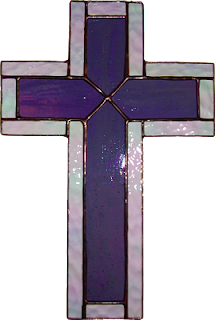 Lisa completed four more Flower Angels while she was in: two made in iridescent green and two with steel blue gowns.  The green photographs oddly due to the lighting but trust me when I tell you that it's a stunning piece of glass. 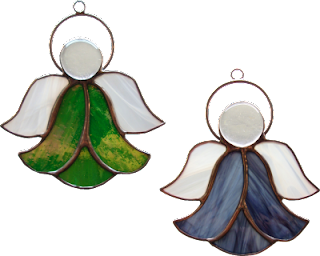 This is Barbara's Hibiscus Window which she had cut out a while back before she decided that she wanted to make a lamp first.  You'll see her panel lamp a little further on down along in this post because she's very near to completing it.  Time was against her though so she spent the last half hour of her class grinding this beautiful window to fit.

Cindy's Wood Ducks Window are surely going to be hanging up the next time your see them.   This week we saw her replace a few pieces that looked off to her and then get her border glass cut out.  Everything fits together now and Cindy has taken this home so she can attach her border and hopefully have it soldered before she comes back in. 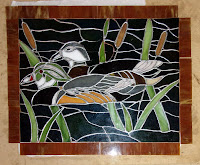 Judy's Winnie the Pooh Window is all ground together and she's begun wrapping glass.  This has always been a favorite pattern of mine and Judy has decided to color the lead black when she's finished soldering.  That means that she's using black backed foil for all of her clear background pieces so that the foil with blend in visually with the black lead lines.  If she were to use regular copper backed foil then all of the black lead on the clear glass would have distracting copper lines running through them. 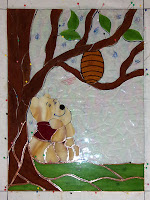 Kerry's Umbrella Lady Window is soooo very close to being completed.   I'll bet anything that this is finished when we see it next time.  And, interestingly enough, his next project will be this very same window only with a shift in the color scheme.  He has his fans and he has people who want to own some of his work!

As I mentioned above, Barbara got all eight of her lamp panels soldered and is ready to join them together.   She could have tacked the panels together to form the lamp but she wouldn't have had the time to finish soldering it so she put it aside until next week so that things will color better.  This lamp is essentially 'in the can'. 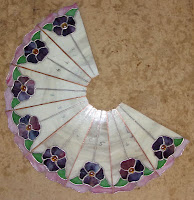 Hera is togetha!   With the center section of her Hera Flag tacked together Shawn is ready to move along to either the top or bottom section of this window.   There aren't many pieces in either section and Shawn is already flying through the creation of her latest project so I doubt that this will take very long to complete.  I think this window has Shawn feeling far more relaxed than her last one did. 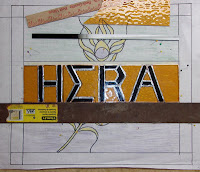 Martha has her Wedding invitation box lid all cut and ground.  She'll solder this together next week and possibly even get it all put together.  Even if it isn't completed next week she still has another week to go before the wedding occurs so time is on her side either way. 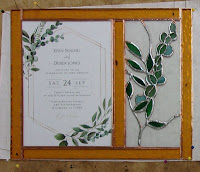 With her two large Peonies tacked together Lara took some time to pick out the glass that she'll be using for her background.   I was going to show you a picture of the glass but it's so incredibly perfect that I want you to see what it looks like when it's cut and positioned in place rather than as a chunk of glass along side of Lara's beautiful flowers. All I can say is that this is going to be one stunning window. 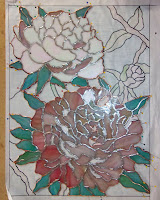 This week Let got the bubbles and the flower cut into her Bathtub Lady Window.  It took some time to do but her bubble are perfectly round and fit into the window perfectly.  The same goes for the flower and leaves whose stems line up without any ungainly joints or sharp angles.  Next week Let will add a double border to this already stunning window. 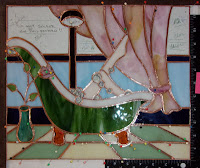 Linda L also got two Snowmen all cut, ground, wrapped and tacked together while in class which means that she'll be soldering these and moving on to another pair (or trio) of Christmas themed panels when we come back next week. 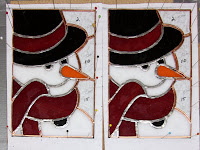 MiMi is now wrapping all of the freshly ground pieces that she had disassembled for her large window repair.   It's interesting to see just how little of this window was actually touched by a grinder which explains two things:  1) Why there are so many ill fitting pieces, and 2) Why it didn't hold up over time.  With MiMi's improvements it's safe to say that once this is soldered it will be rock solid! 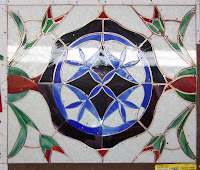 There are only four corners left to go on Jan's second (and last) Plate Window before she can begin soldering it.  I must say that it's a perfect duplicate of her original window which is a good thing since they're a matched pair which will hang in the same room. 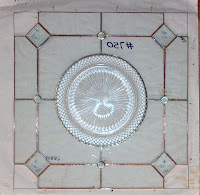 Steve's latest Champaign Glass is bubbling up nicely and taking shape in a very effervescent way.  He's on a roll with these!

And here we see the Sewing Machine Window that June is about to embark upon making.   Her pattern has been traced onto poster board and cut apart, her glass has (for the most part) been chosen, and when June comes back she'll begin cutting glass. 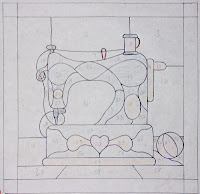