December In A Nutshell

December was a busy time at the shop and I've been EXTREMELY neglectful of the Blog because of it. Rather than trying to sort everything in the weeks that they occurred I'll just roll everything up in this one posting. I regret that I don't have finished pictures of everything. People where in a rush to get their projects completed and would rush out there door or pack them up before I could get my camera out. But things are quiet and calm again so we'll be seeing more completed windows soon.

That said, we're going to start things off looking at a pair of beveled windows that Lea completed about 2 weeks before Christmas. She's averaging a window a week (or better) now. Practice makes perfect I guess. :-) 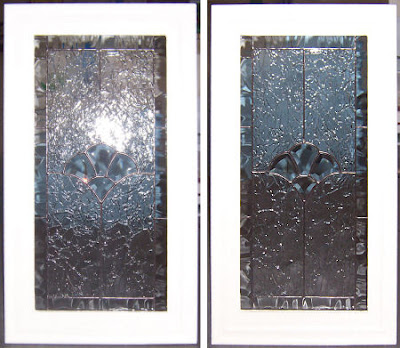 Jane made another of her ever popular bird windows in December. This was all we go to see of it because she finished it while she was at home. And it's sold already as well!

This was a finished Mardi Gras mask that Fran made. Made from Black Baroque glass the pattern was created by Fran herself (as are all the masks she's been making). 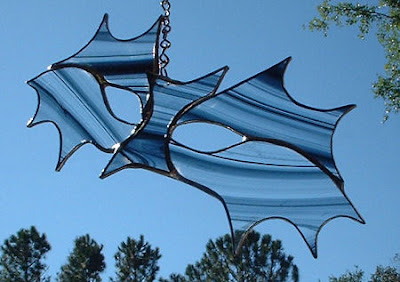 Christine finished off her Indian Window just in time for Christmas. I sort of jumped the gun on this one because after it was washed off I put patina on it to turn the lead copper colored. Luckily I didn't get very far before Christine stopped me from going any further-- she wanted to leave it silver! A little steel wool removed the coloring and now you'd never know... 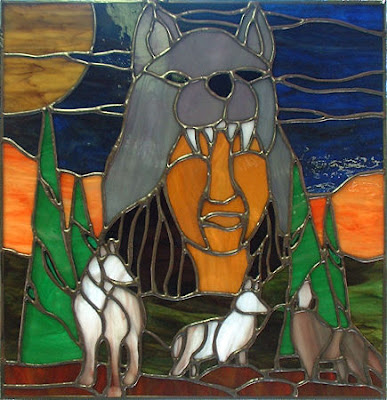 Cheryl completed her Angel window. It came out so nice that Grace decided to do the same window herself. And in a strange turn of events Cheryl has begun working on the cross window that Grace was working on in December. Talk about admiring a fellow students work! 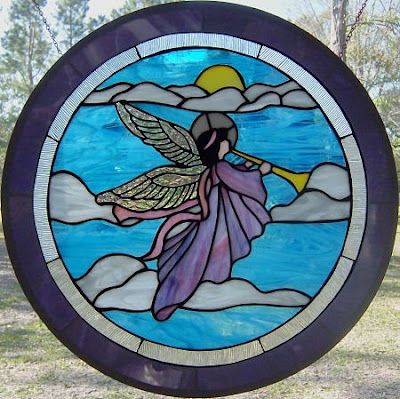 Here are 3 Fleur De Lis that Grace completed just before Christmas. They were finished with black Baroque borders (like the Mardi Gras Mask that Fran made up above). I know this sounds strange, but look how they all match perfectly. Grace works quickly and efficiently now days. Beginning students have a lot of trouble making identical pieces. As you can see, Grace doesn't have that problem at all...

And we can't mentioin Grace without mentioning her mother, Janice. She was hard at work making the second of 3 windows for her house. Here you can see it almost all cut out and ground. When I last saw it Janice took it home to finish soldering. She'll be working on the final window of this series next week. 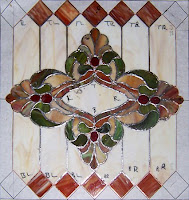 This was a Fleur De Lis window that that Cheryl made for her sister in Baton Rouge. I'd swear I took a picture of the finished window but I can't find it on the camera's memory card.

Here we have another self designed Mardi Gras Mask from Fran. She's really on a roll with these things. She's working on one now that is MUCH larger and more intricate than 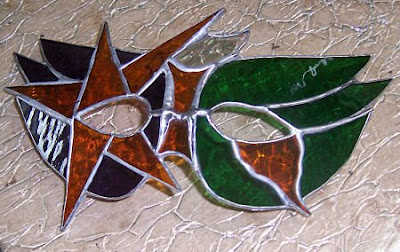 Does this door look familiar? It's the last of the doors this size by Lea. She's got 2 thinner doors to do after this one and she just brought in 2 more smaller square doors so I could have the pattern drawn up for her before she comes to class. 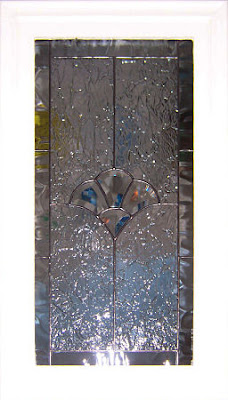 This is the Cross window that Grace originally made that Cheryl started. What you see below was accomplished in one class. All the cutting, grinding and most of the wrapping! We WILL see this one when it's completed. 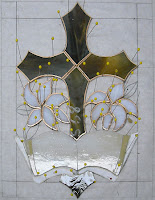 Fleur De Lis' are popular here in Louisiana so it's not uncommon to have one made every few weeks here. This is the last one that Fran made just before the Holidays. As you can see we really got a good picture of it. 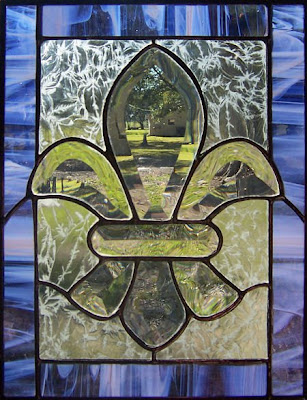 And lastly we have the Angel window that Grace is working on. You can see a finished version of it up above because it's the same pattern that Cheryl made just 2 or 3 weeks ago. Grace has almost all of the wings cut out but it's hard to see the clear glass on top of the pattern. What impressed me was how exact her cutting has become-- there's hardly any reason for her to grind the pieces that she cut here! 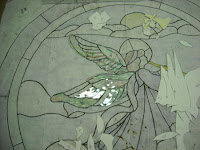 So that brings us almost up to date here. Expect a second Blog posting on Monday night which will cover our first classes of the new year. I hope everyone had a Merry Christmas and a Happy New Year!