We're ringing in the new year with not one but two more completed doors by Lea. Since bevels wouldn't fit in the limited width of these thin doors Lea had to cut smaller versions of the bevels out of Flemish glass. She'll be working on 2 smaller (but wider) doors during her next class. 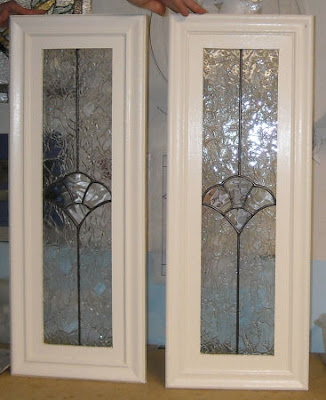 Cheryl finished wrapping the remaining pieces of her Cross window and then filled in the missing background pieces after tacking what she had completed together. It's a little more work this way but it makes for a better fit with less grinding. This window will be finished next week after she adds her black baroque border pieces and then solders it.

Jane wasn't sure what she was going to do when she came in but she knew that it was going to fit in her bathroom window. After combing through many patterns this is the one that caught her eye. We spend the rest of the class drawing it up to the size she needed but next week we'll see some cut glass laid out on the pattern! 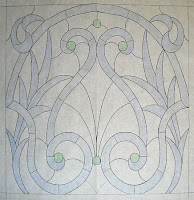 Fran designed a new Mardi Gras mask while she was at home and asked for input on how we thought it looked. We made a few minor changes in it for stability and then she started working on a wedding invitation box. After attacking the invitation with a razor blade we were able to make a plain text front and then a fancy backside that will be revealed when the glass box is opened. Here is rough drawing of the top of the box:

And here is a drawing of the box top lifted open so you can see the fancier side of the invitation. Simple text invitations are easy to do because you only have to deal with one side, but when you have a fancy invitation you want to make sure that all of it is preserved in the box for safe keeping.

That was about it for classes this week. We'll see more student coming in next week though!