We didn't get to see Gerald this week but we still managed to have a good time without him. :-) Perhaps next week...

When Denise's Mother passed away last year she wanted to do something special and I think she's succeeded. She made this stained glass box which not only contains her mother's ashes but helps serve as a reminder to everyone who sees it just how important she was to Denise. She'll surely never be forgotten. 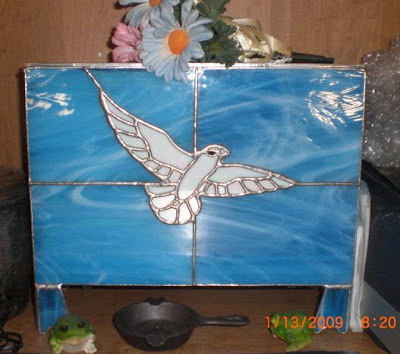 Denise also finished her Mallard window and topped it off by adding an overlay of cat tails and leaves which help give it a 3D effect. Denise chose to make this window with colors that match the actual birds rater than exagerating the colors which can give a window like this a bright (but cartoonish) look. 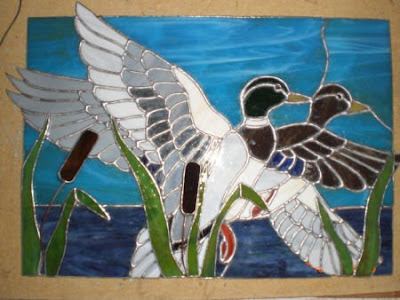 And Denise also cut and ground this Moon & Bear window while she was home last week. It will be a baby gift when the child is born and since the sex of the child isn't known Denise as incorporated both pink and blue into the color scheme which sort of makes it a unisex gift. :-) 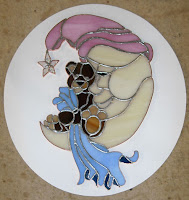 Cheryl has begun work on one of her most ambitious windows yet. This peacock pattern was a big hit with the other students and Lea has already signed aboard to do this window when she's completed her kitchen cabinets. This is going to be a beautiful window if I do say so myself.

Jane has just about completed her window. After tacking it together she began to sort through glass to pick out a border color. Everyone's first choice was the same blue (for some reason it looks green in the picture) that forms the curving pattern in the window but we didn't have any of that left. Ater flirting with the idea of using the background glass Russ decided to see what a slightly darker pink would look like. And it was unanimous-- The darker pink was exactly what the window needed even, perhaps, more so than Jane's original choice of blue. 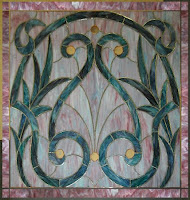 Lea continued working on her cabinet doors. She completed another small window and then got this large window all cut, ground, wrapped, and tacked together before she called it a night. She'll finish the second one next week and more than likely take both of them home with her.

We missed Janice and Grace this week and have Glen and all of his family in our hearts, minds and prayers.