July In A Nutshell

The last 3 weeks of July was a slow period for classes and with only 1 picture or so a week I just held off to post the pictures all in one shot. With school beginning again and vacations coming to an end I think we'll have more students in on a regular basis.

We've been participating in the Franklin Farmer's Market on Saturdays (7am - 12pm) and Tuesdays (1pm - 6pm) and have made a number of new items to sell there. This was made 2 weeks ago and is certainly colorful. It's a variation of the Peacock window that Cheryl made in June (which cane be found in the June section of this Blog). The Peacock is certainly a hit-- it gets a lot of comments at the Farmer's Market. And Jane is making a variation of this one (with different borders) as I type this. 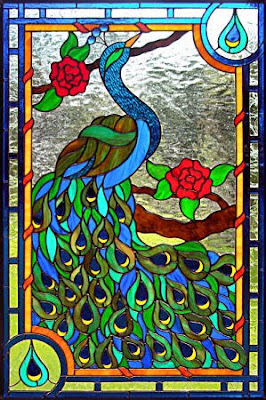 Fran made two Fleur De Lis windows using iridescent glass for the Fleur De Lis' and the borders. She did most of the work at home and did a great job. 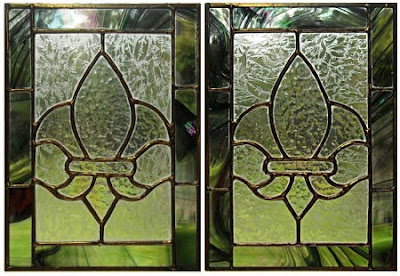 This is a picture of one of Fran's Fleur De Lis one week earlier. What a difference a week makes!

Grace spent most of the month wrapping all the pieces for her window. She was also away during a good portion of the month so it didn't take her nearly as long to wrap this as it might have sounded. Nonetheless, there are a LOT of pieces in this window! As she enters August Grace only needs to wrap the clear glass Fleur De Lis' to get ready for tacking this together. There are 8 small rounded accent pieces that need to be cut also but she's not sure what color they'll be yet. She'll decide that when she gets a better look at her window.

Meanwhile, Janice worked steadily away on her last 2 windows of this design. This just needs the 4 pieces of background glass and a border and then it will be complete. Next week Janice will begin soldering her window and the following week it will go home with her. 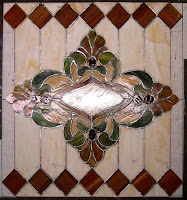 Cheryl worked on her latest wedding box. It may be hard to make out here in the picture but once I tell you it's two hearts intertwined you'll have no problems discerning the pattern. Once she grinds, wraps and tacks the background all she'll need to do is add a border and a box bottom to finish this. 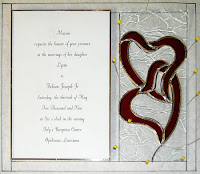 And like magic it's now one week later and Cheryl has ground the background glass, wrapped it, tacked it and added a border. She also soldered it and added a hinge to the top, which isn't visible because it was done correctly :-). Without a doubt, this will be finished next week. (I ought to know-- I have the picture of it completed already!) 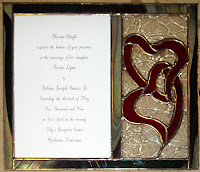 I'll make another entry on Thursday to help get things caught up. That's what happened in July here at Bayou Salé GlassWorks. Come back soon!