We have three completed projects this week with more to walk out the door for the last time during our next class. First up we have Steve's completed Sea Turtle. His excellent use of color and textured glasses really sparkle in this window. Steve completed about 1/3rd of this window at home on his own and you have to admit that it turned out perfect. 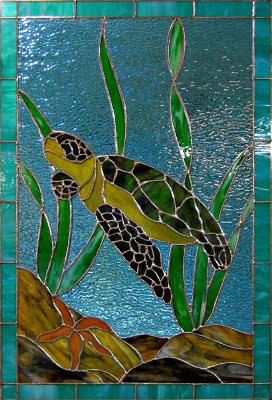 Patty brought home her flower suncatchers and came in with them all wrapped and ready for solder. Since they're suncatchers she had to deal with the tricky edging process which can really be a pain, but her cutting and grinding was superb and she flew through that with no problems at all. And best of all, these were made with small pieces of scrap so they cost hardly nothing to make! 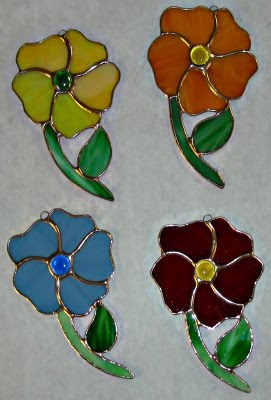 When does a simple project become a problem? When there's a deadline looming! Jane started this lamp with the smallest amount of glass and when the instructions that came with the pattern said that there 6 repeats in this lamp we had no reason to doubt it. By the time it was all cut and ground Jane had only a 6"x 4" piece of glass left. Then when she went to assemble it she discovered that it actually takes 7 sections to make this lamp. There was no more glass left to work with and to make matters worse we weren't sure what kind of glass it was. And let's not forget that this is to be a Christmas gift and Christmas is only 2 weeks away and that ordering the glass might take that long to come in. We decided that if worse comes to worst we can space the sections out on the mold evenly and add another row to the design (as you can see in the picture) but Russ spent some time on the phone with his nose in catalogs until he huntged down the correct glass. Another hour later he was able to find a supplier with it in stock from where it would be delivered inside of a week. With only 32 pieces to cut ground and wrap I have no doubt that it will be delivered on time. Tune in next week for an update where I'll hopefully say that the last section has been cut. 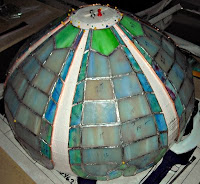 Cheryl was all alone in class this week because Janice became a Grandmother again which means that Grace has become an Aunt again as well. Congratulations to both of them!

So Cheryl had our full attention even though she didn't need it. After picking an etched glass for her background she then got the final two borders on her window and took it home to solder. We'll see this finished next week without a doubt. And I have to admit that I love the pattern even if the thin borders are a pain to do. 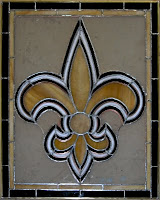 In a similar vein we get to see how Camille made out with the top tiger half of his window this week. I'd said it would be tricky but all the cutting went just fine and by the time Camille left all of the tiger was cut out. He'll be at the grinder next week. Even in this rough state you can't mistake what those tiger eyes are. 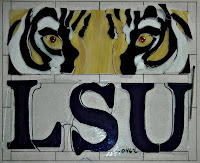 Catherine has all but her borders done on her Fleur De Lis window. She went with a clear crackle background and spend a little time grinding it after she cut it all out. Then before I knew it she had all the pieces wrapped and tacked. Borders never take long to do so I'm sure she'll be ready to solder this next week. 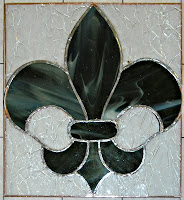 And there's been a project someone has been working on that I'm sworn to secrecy about. All I can say is that he's been working VERY hard on this window and it was completed this week. I promise to post the pictures here after Christmas has past so you can be as impressed as I was with the end results. 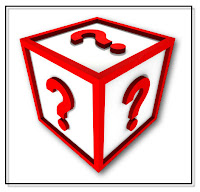 That's it for this week and this brings us right up to date.