We only had one class this week and with it came the last completed project of 2009. When we last saw Louis he had taken his Tropical Fish window home to grind and wrap. Little did I ever suspect that when it would return just a few weeks later it would be be all finished-- soldered and all. He brought it in for me to add the final brass channel to it along with some hooks so he could hang it. We touched up the solder, gave it a bath and this is what he took home with him. 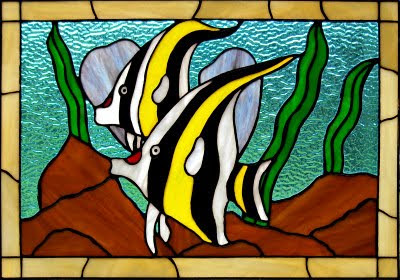 I think that Louis was surprised at how well it cleaned up but that's almost always the case. When a window is covered in flux it's hard to see just what you have in front of you. Louis did a great job and he says that this project taught him a lot about making stained glass windows. He plans to continue working at home and I think he's got what it takes to do some wonderful work. Hopefully we'll be able to show some of what e accomplished here on the Blog.

That about wraps it up here for this year. We'll be back next week in 2010 (sounds like Science Fiction, doesn't it?) with all new projects.