Tracing It All Out

With Christmas right around the corner we have people working on various gifts. So we'll start this post with a look at the flowers suncatchers that Patty traced out, cut-out and then ground. It's a good deal of work to achieve in one night and I'm impressed with Patty's abilities this early on.

Louis got all of his window cut out and even got a good section of it ground before he called it a night and took it home to work there with it. Sadly, I forgot to take a picture but what you see below gives you a good idea of what his window looks like. Although the fish haven't been cut out in the picture below you can rest assured that they are cut and that half of this window is ground. I can't wait to see this one completed.

Steve has finished soldering the front side of his window and has moved on to the back side. All this needs is a brass channel surrounding it and and a bath. After that we'll get to see it held up in the light. Steve's been spending a lot of time working on his glass in his shop at home so expect to see some big things in the coming months from him.

As you know, Grace has begun working on a series of beveled boxes. Last week she did the tops and this week she's managed to complete 3 bottoms. She has a few more to make so AFter these are joined together she'll be doing more of the same.

Meanwhile Janice got the background cut, ground wrapped and then tacked together for her baby announcement box. When that was finished she moved along and wrapped the bevels for 4 small bevel boxes of her own. I must say that they've been very popular this year. 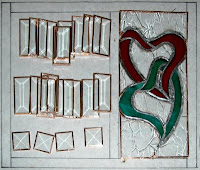 Jane has completed cutting out all the pieces for her lamp and assembled 2 of the 6 sections that make it up. Pretty soon it will all be tacked together and we'll really get a feel for what this lamp will look like when it's completed.

Catherine has started her first window and she's decided to make a Fleur De Lis design. Here's the pattern with the actual Fleur De Lis all cut ground and wrapped. Next week she'll tack it together and then cut the background. That will end the hard part of making this window. Notice how nicely Catherine followed her cuts: the lines of the large center top piece flow perfectly to the smaller bottom centerpiece just as they're supposed to. I've seen a lot of Fleur De Lis windows in my time and it's that detail that always seems to be off on the them. 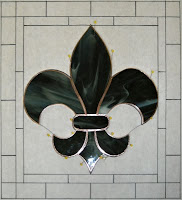 Camille has decided to make an LSU window as his first project. He traced out his pattern and we decided to start with the easiest cuts first to get him comfortable with the glass cutter. I didn't want to see him get discouraged by trying to cut out those tiger eyes first because they're both complex and tricky to cut. But judging by the way he got all of his bottom section cut I'd say he'll have no problems with the top half of this. 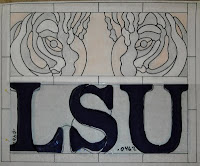 Christmas is almost upon us. Although we have no completed projects this week we'll be seeing plenty of them in the weeks to come.