Oct. 14th - How Much Is That Peacock In the Window?

We have four completed projects to show you this week and we also get to introduce two new students. But the big news is that we're just about up to date with our Blogs again. By our next set of classes we'll be all caught up and back on a weekly schedule no matter how hectic it gets around here.

Let's start by taking a look at two of Bonnie's completed Fleur De Lis windows. The first one features a black border in a new glass by Spectrum. It's similar to black baroque glass but without the deep textured lines and the heavy clear sections. This is a nice black glass because it actually lights up rather than just block out the light behind it. 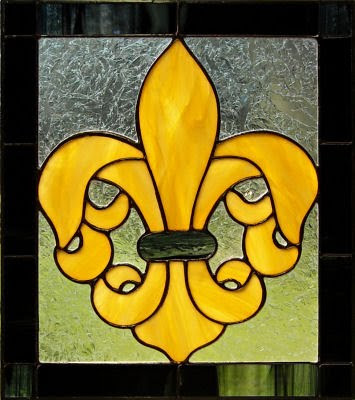 This is the second FDL window that Bonnie completed this week and this one is done in purple and gold. The colors are a bit washed out in the picture because I needed to remove the green cast that the grass in the yard added to the window. I had to decide to post the washed out colors picture or the one big green window and you can see which won the contest of being posted here. 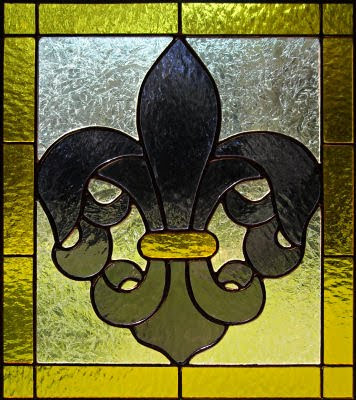 Next we get to introduce you to Ceil and her first project. We all know that on our first night in class we make a butterfly so the picture below comes as no surprise to regular readers here. Ceil handled all the steps of making this flawlessly. And that explains why her bright red butterfly is perfect. 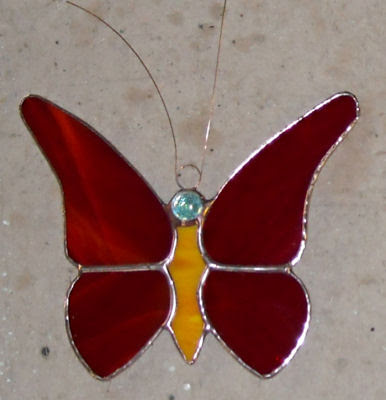 Next we get to meet Anita who came in along with Ceil and who is our second new student. Anita wasn't going to just let Ceil just come in and steal the spotlight and I must say that Anita did a wonderful job with her Butterfly as well. I can't wait to show you the windows they start working on next week. 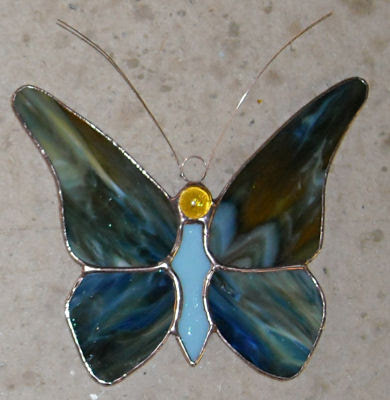 It's been a while since we last saw Yvette's Peacock but now that the busy summer is behind her she's going to get back on this window to get it completed. She wrapped most of it at home but still had to wrap the small yellow sections of the peacock feathers. So that's what she did in class this week (you can see them to the right of the window). Next she'll be tacking the feathers together and then filling in the missing sections.

Terry decided to make a Fleur De Lis window this week but put a diamond design background beneath it. She'll cut the background glass in one shot so the grain will all line up. Because of that, all she needed to to was cut out the actual FDL tonight. Not only did she cut it out but she ground it and then took it home to wrap. Watch for her background to be cut next week! 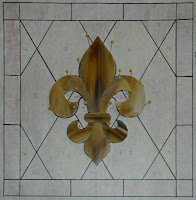 Patty has 2 more Oil Kaleidoscopes and stands just about completed. She needs to insert the mirrors and then add the front cap to finish these off. She's up to almost 2 a week now. :-) Can anyone say "Christmas Gifts"?

Janice has her Frog window well under way. With the top just about completed she'll begin working on the letters for the name, Lakyn, that will go on the bottom of this next week. I love the frogs blue eyes-- they really set him off and are there for a reason. Lakyn has blue eyes himself. 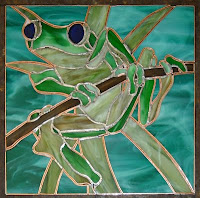 Now, Jane is working on a lamp and she's so fast and efficient that I rarely get pictures of her work because it's all boxed up when she tells me she's leaving. And on a project like this there isn't much to see until she starts tacking it all together. Nonetheless, I have the mold to show you which clearly shows all the pieces that make up this lamp. 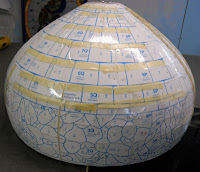 And looking at the picture below you're probably saying, "What's with the egg containers?" Well, when you're dealing with 5 of each piece you need a way to keep things sorted as you cut and wrap everything. Jane's solution for this problem is to use egg cartons. They're perfect for storing and moving around her glass pieces while keeping them all in order. There are 120 pieces in just these 2 cartons.

Now we get a look at another huge undertaking. Grace has begun to cut her New Orleans window out and it's looking great. You have to remember that this picture is 3 weeks old now and I've seen it really come together in those 3 weeks. No one looks at this without saying, "Is she crazy??!!" 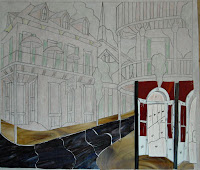 Bonnie also cut out the background for her diamond shaped Fleur De Lis window this week. It's hard to see the clear glass against the table, but of you look closely you can see the difference between this one and the two posted at the top of this update. This one will be completed next week so check back with us to see it hanging in the sunlight. 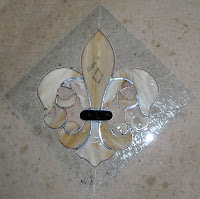 And there you have it. Expect another notice about an update within the next day or 2.