We've been talking about it for a while now and this was the week we had the chance to see if you can actually overload on Oil Kaleidoscope goodness. But we forgot to check it out!

Patty completed both of her latest Kaleidoscopes and I believe that this may be the last of them for a few weeks at least. We've been talking about what would look like if we made a pair of Oilscope Binoculars-- you know, one scope for each eye. But we weren't sure what it would end up looking like. So we said the next time we have two oil scopes we'll put on in front of each eye and see what it amounts to. Oh well, I guess we'll find out next time. 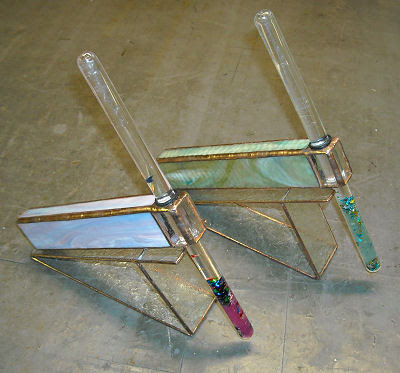 There wasn't much Patty to do to finish up her Oilscope so she spend the majority of the class working on this 'Butterfly Lady' or 'Fairy' or 'Wood Nymph' or whatever you want to call her. It's basically a pair of fancy wings that attach the the back of a pewter figure. This week Patty decided to make one and Roxie followed suit. Since they both used the same glass it's hard to tell whose is whose but the P on the pattern tells me that this one belongs to Patty. 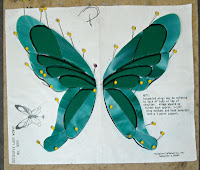 And this unmarked one belongs to Roxie. They both have them ground perfectly so they could take them home to wrap. Next class they will have them all soldered and ready to mount on the bodies. 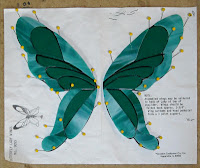 Terry has the background cut on her Fleur De Lis window. We wanted the pattern of the glass to flow unbroken through the background. To do this Terry made and tacked her Fluer De Lis portion together and then cut a square of background glass the exact size of the background. We traced the crosswork lines onto the glass and then put her FDL in the center and traced around it. She cut the straight lines first and then the remaining curves and when it all went back together she had a unbroken pattern. It isn't always possible but in this case it was. Click on the picture to enlarge it and see what we mean about the flow of the glass. 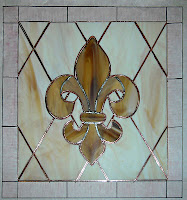 Paul is back with us and he's going to do something a bit Avant-gard. Tired of dealing with rules, discipline and structure he's making a box whose top will be made of small pieces of glass that fit together like a stone wall of color. He's assembled his glass, marked off the size of his box and has begun laying it out. There are some of the pieces that he'll be using. 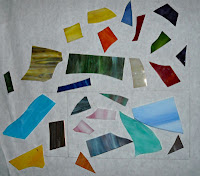 Janice tacked the top of her Frog window and then cut out the letters forming the name 'Lakyn'. After grinding, wrapping and tacking the letters together she cut most of the background of the letters out making sure to omit the left and right pieces. By leaving them out she'll be able to perfectly center the name under the frag and be able to adjust for any growth. There are only 8 pieces left and the the background before she finished this window. 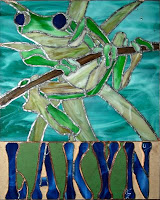 Grace was busy with the remainder of the building on the right of her New Orleans scene. There are a couple sections that she's unsure about so she's just leaving them blank for now. It's always best to continue along with what you know you want to do rather than make a hasty and possibly bad color decision. As a window comes together you may see that things are working out differently than planned and this may affect color choices later on down the line. As it stands it's looking great. 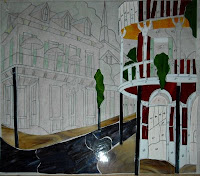 Anita has most of her window completed now. She managed to pick out all her glass at the beginning of this class and now she's running with this project. She'll cut out her green leaves and stems next week and move along to grinding this. 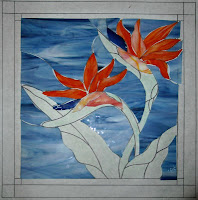 Ceil's got the center of her flower all cut out and when she comes back next week the glass she picked for her main petals will be in. She cut the hardest part of this window first which means that the rest of this should be fairly easy. If you look at the pieces you'll see that although they are large they all have graceful curves which make the remaining work a lot less complicated than what it could have been. We're also talking about adding a frog to sit on this flower before she's through with it. 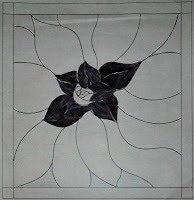 Everyone is class is starting to talk about Christmas. It's a lot closer than we might like to think. Cheryl is anxious to get started on something new now that she's back from her vacation but she's still unsure of what it will be. Beveled boxes will be turning up during class but I've heard other idea's thrown around so check back with us later to see where it all leads to.