Even with the holiday falling on a class day we still managed to see 2 projects get completed during this round of classes. Our attendance was a bit sparse but that's to be expected during a major holiday like Thanksgiving. That food doesn't cook itself and it certainly doesn't clean up after itself either.

I believe that Paul was really shocked at how nice his abstract box turned out once it was all washed and polished. The top itself is nice and colorful but then when you add in the effect of the reflection in the mirror which is visible through the clear sides, well, it just made everyone turn their heads to look twice! So in the end the idea was well worth the labor that was involved. Now I don't want to say 'I told you so' but right from day one I told Paul that his design was not inferior and that it would look great when it was finished. And here's the proof. 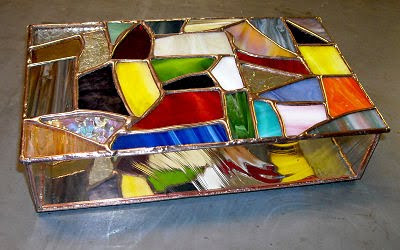 I also knew that this next window was going to look really good when it was completed. Anita worried about her soldering but she's caught on to the process very well. All she needs is just a little more practice and she'll really be a professional at this. The things I like about this window are the way she used her accent color for her inner border and then the way she repeated her background glass in her outer border. It's a tried and true combination that always works and give the finished window an airy feel rather than a boxed in effect. 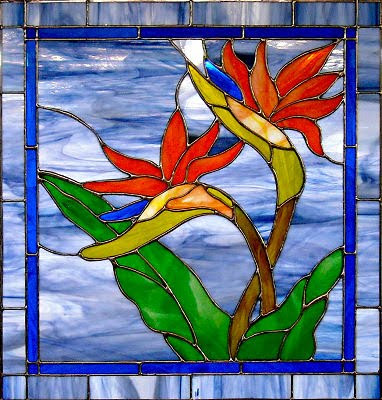 Cheryl has just about completed her "HAY, LADY!" window. The only thing left to do is paint a face on her and then wash it and color it. Let's review what she got completed this week because I don't want to shortchange Cheryl. First she picked the yellow background glass and then she cut it all out. Then she ground her background, wrapped it and the tacked it all together. Next she cut her border, ground those pieces and wrapped and tacked them all on her window. And if that weren't enough she had time to solder the front side and most of the back! Whew, talk about a busy night! This "HAY, LADY!" is looking like it will be features in our next Blog post.

Trecia is moving along at a tremendous pace with her Fleur De Lis window. She came in and ground all of her background, wrapped it and then tacked it all into place. Then she got her thin inner border cut, ground and wrapped before taking it on her window as well. There's just one remaining border to go before she starts to solder this and that will surely be next week. I have to say that Trecia really understands curves and how to grind something on the grinder without making the curve have angles. It usually takes some time to learn but she's done wonderfully.

And while I'm handing out praises, let's not forget about Terry. After she tacked her center piece together she laid it on top of some white glass and traced the whole thing out. We originally wanted to stay away from added lead lines but the design was a little tough for that so we split the 2 largest pieces. She might have tried to carefully cut them out but had the piece broken it would have stood out like a sore thumb if it were replaced since the background is cut out of one continuous piece of glass. See, replacing a broken piece would mean that the grain lines would no longer match up in one section of the window. But this way it all flows perfectly and Terry will add her border during her next class.

Janice was doing double duty this week-- she was helping Grace wrap pieces of glass and she was working on making a biplane kaleidoscope. These are the pieces that will form her plane. Next she'll work on the colored glass wheels that make the propellers. 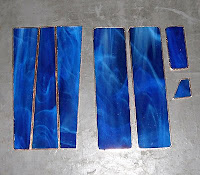 And here we see Graces window almost 100% cut out. Some of the pieces that have been ground are wrapped now so the next thing left to do is to get this all ground. It's coming together nicely and there's no much left to do before she starts soldering this window. 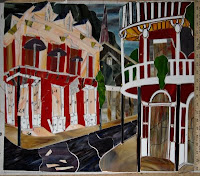 So that was it for out Holiday week. I hope everyone had a great Thanksgiving and I'm looking forward to seeing everyone again during our next classes.