It's The Eye Of the Tiger, It's The Cream Of The Fight

Anita has completed her Louisiana Eye Of the Tiger window and she's got other people thinking about similar projects. There's a lot of pride down South here and aside from the letters L, S and U the only thing that spells it out just as well is a tiger eye or two. And when you combine them you get this: 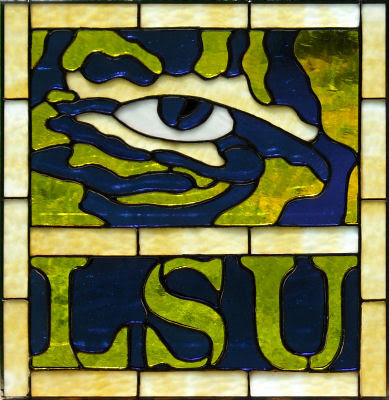 And since we're looking at the completed center piece for Terry's 3 windows it's a safe to assume that she's started another project this week. (Check that one out further below.) As for this window I have to say that the outer tan border surrounding the ovalish center really made a difference in the overall design. I've photoshopped the tan out of the second picture so you can see just how much flair 12 little pieces of glass can add to a window. Good call, Terry.

Here's Terry's window as she had original drawn it. We both agreed something was missing.

I'd have to say that Susan's daisy box is moving right along since the top is 100% completed. With only 5 pieces left to go I'll bet she takes this home next week. And since I'm more than a week late in posting this you really shouldn't be making bets against me since I can see the future on this. :-) Susan was originally going to use the same glass that she used in her background for her border but we found a piece in the rack that was just a tad bit darker and it was PERFECT for this box since she didn't want to bring another color into play.

Sonia's Peacock window is really taking shape now. Not only does she have it completely cut but she has the body section ground already. She's going to surround this with the fancy 3 section border so you just know this is going to be a show stopper when it's completed.

Roxie's Yellow Camp window is looking good too. She came in with her letters all foiled and then set upon tacking them together. Once that was done she cut the white background glass behind the word YELLOW and ground it all to fit. Then before she left she got it foiled! Next week she'll be working on her Camp section. 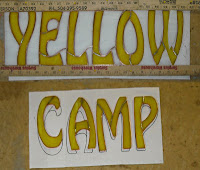 There are so many pieces to Patty's window that she feels like it will never be completed but look at how it's filling up now! And you have to remember that it isn't just cut-- it's cut, ground, foiled and tacked together. When you take all of that into consideration you have to admit that Patty is doing wonderfully on this. Next to Grace's New Orleans window I'd have to say that this is one of the most ambitious projects that a student has made yet. :-)

I promised that we'd take a look at Terry's newest window before this update was over with so here it is. She's working on a Bass Window and it has always been one of my favorite designs. Wait until you see this with some light behind it. The glass has a texture that really lends itself to this fish pattern. 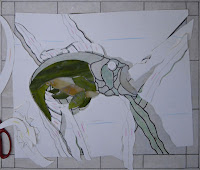 Frans Ducks are not only in flight but they're now over water as well. With nothing left but a border to go I'd say that Fran has set a new speed record for making these Ducks in Flight. Some solder and a black border will round this out and then she'll be making a first in class: A Donkey Window. 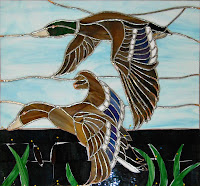 Cindy's front door is almost complete now. She only has 2 long thin panels to go before she can install these and call it a finished set. It's been hard to get a good picture of this window since it's so long but here it is all in one shot so you can get the full effect. Next week she'll be soldering this one.

Bonnie P's Rooster window is also shaping up now that it's all cut out and mostly ground. The only thing left to grind is the section to the left of the Rooster and then she'll be foiling this one. I'm impressed with Bonnie's cutting (and grinding). She hasn't been in class all that long and she's really moving quickly and efficiently.

Ann is back and ready for some stained glass action. She picked out a pattern last week and we 'kneaded' it to fit the window she'll be installing this in. When she begins her second window (which will be real soon) you'll easily see how these two windows tie together. With her center piece completely cut and half of it ground I'd say she'll be cutting the background glass during her next class.

Borders. You don't think much about them but they honestly are a very important part of a window. A simple window with a fancy border can sometimes outshine a fancy window with a plain border. Myrt saw this border style on another window and decided that it was what she wanted surrounding her Fleur De Lis. It took a complete class to get it cut and ground but it's almost completely wrapped as well. So next week she'll begin cutting the background glass for this and we'll really see her window take shape. 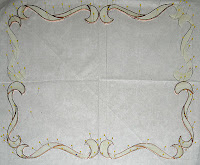 There has been a lot going on here which has made this update get posted later than it should have been. We're still behind one week but that will be fixed shortly before classes end this week. Come back soon to see Susan's Daisy Box and Ann's Accent Window completed.