Anita's Heron or Egret window (take your pick) is completed. I'd say a good 90% of the work on this was done at her home in between classes. It cost her soldering iron its life (which went out with a POP!) but the end results are wonderful. I like the way her border picks up a color from the center of the window. 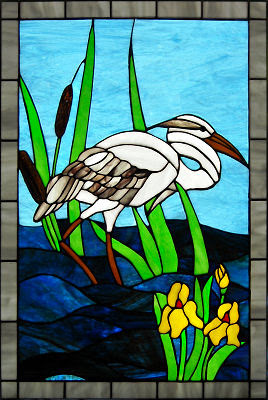 Terry finished the first section of her 3 piece window and it all went together perfectly. Terry isn't afraid to design her own projects and this is another example of her handiness with a pencil and paper as well as with a glass cutter. 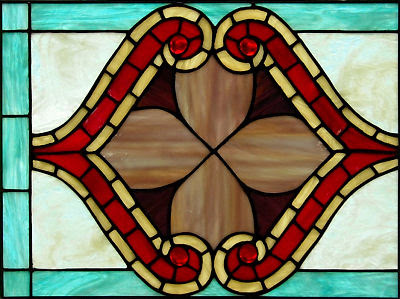 And before you think it will be a while before her other 2 windows are complete I'd like to show you just how far along they actually are. Her center piece is in need of some foiling and a backgound but the hard part is done. And the matching panel to the one above only needs a border and some soldering. Terry is most certainly into stained glass! 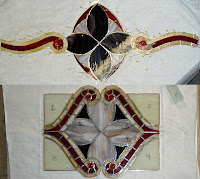 Susan had taken home her inner border and wrapped it there. When she came in we tacked the border into place and then cut strips on the strip cutter for her final outer border. It's all together and that means that when she return next class we'll add a brass channel around the edges and then move on to the soldering process.

Sonia got the bottom half of her peacock feathers completed with just the background feathers of the tail left to go. They're all traced out onto the glass so I suspect that she'll begin grinding this when she returns to class (another year older!)

Myrt is ready to solder her Wine and Cheese window. And knowing how quickly she solders I'd say it a fair assumption to say that this will be one of our featured finished windows in the next Blog post. We still need to add a brass channel to the edge but that shouldn't take more than 5 minutes at the most. 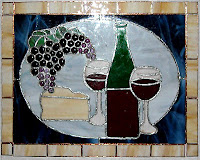 Roxie made a Faux Pas this week when she accidentally came to glass without the letters she wrapped while she was home this week. She put them in her car but forgot to transfer them into the car she was carpooling with. Rest assured, Roxie, this has been done numerous times by other students. So rather than sit around she started making a hanging Beveled Charm Chain. She re-foiled some bevels that she had, put a bead on them (Just Bead It!) and then tinned a LONG piece of copper wire. The wire was twisted into full circles and cut up into half circles. Right now things are just laid out here but it all has to be soldered together yet. This will be finished next week for sure.

Peewee's Fleur De Lis is all cut and tacked together. He replaced the missing piece and added his border which means that when he comes back he'll be ready to solder this. Expect to see this one wrapped up shortly-- possibly when he returns in 2 weeks.

Janice came in and foiled all of the pieces that she had cut and ground last week. We didn't have any of her border glass due to a miscalculation but she was able to continue working on this by soldering what she has completed to this point. When she returns she will be one of many students who will be adding a border to their windows. 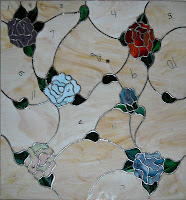 Dianne's Rooster window is tacked together. The only thing left to cut is the border and then she'll be soldering this. There was a lot of grinding to do in a window this complex but she managed to get through it wonderfully. Before the class was over we had it all foiled and ready for solder. There's a small fence post (?) that the rooster is standing on that will cut into the border but it still won't take long to get the rest of this cut.

Cindy is as completely cut as she can be at this point in the game. The only pieces left are from a glass that match the color of the room this window will be in and the glass has been discontinued! Go figure. Luckily it's a recent discontinuance (is that even a word?) and we think we've hunted some more of it down. While she's waiting for the glass she's begun grinding her largest section seen here.

Grace is back! She started off making a small, simple Star Of Life with a Staff Of Ascelepius (sometimes referred to as a Caduceus) but it sort of mushroomed into this fancy pattern with a rhythm and fancy background that's going to look really nice. Next week we'll see the glass that Grace has cut for this design. 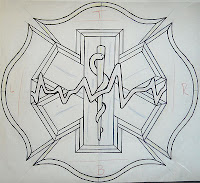 Anita not only completed her Egret window but she also began another project this week. I feel like a fool saying that it's an LSU window when that's so readily apparent, but that's what she's making. And she's put a tiger eye on top which may be a little hard to see right now but once it's all ground it'll show nicely. That's it for this, the first week of August. We'll have more projects completed and new ones started when we return.

Posted by Bayou Salé GlassWorks at 9:19 AM