The Party That Never Was

Anyone want a cupcake? We had a plate of 6 cupcakes for everyone attending class Thursday night to celebrate Sonia's birthday but Sonia got sick so Russ and Paul did some MAJOR damage to the stash of cupcakes (Bonnie didn't have any-- What will power!) We ending up going home with only 6 cupcakes in tow. We really hope that Sonia had a great Birthday because we sure enjoyed her cupcakes! 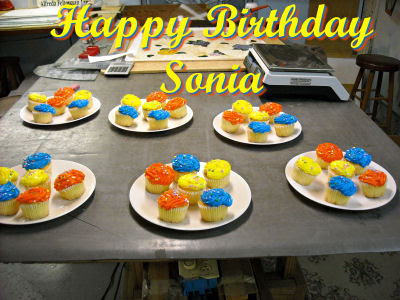 Peewee came into class expecting to solder his window and when I saw what he'd accomplished on his first side I knew that he'd be taking this home with him before the class was over. This window is a nice combination of colors and textures which means that there wasn't any chance that this would come out looking anything but great.

Pam's been busy while she's at home. She came in with this suncatcher all put together with everything but a final soldering. We looked it over and then finished soldering it so she could hang it up when she gets home. She has her next project started and you'll see how quickly she's moving on that one a few entries down.

Two down and 1 to go. That's what Terry was thinking when she left class knowing that her second window in her set of 3 was completed. After making her last project Terry wanted to be sure to use some glass with color in it and she's succeeded. The pattern is her own design and it really flows nicely. And her soldering is among the best of all our students. I only had to touch up a few joints on this before it was washed, colored and photographed. Terry's soldering is superb and I really want to make sure she knows it. 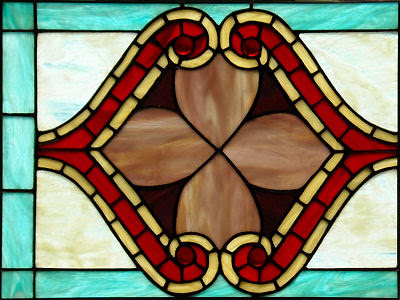 This is the last of Terry's windows before she moves on to something new. It's all tacked together and she'll be soldering this at home.

Susan wanted to make a Daisy box and it's coming together nicely. With the flower cut and wrapped she only has about 8 pieces left to go before she finishes the top of this box. The current plan is to go with a clear background and then a solid color for the border and the box sides.

Pam had finished her Butterfly and Flower suncatcher and moved along to her next project which is this duck window. The head still has to be cut but the lions share of work on this project is done. I think she's going with a granite back root beer glass for the final border. A very nice panel indeed. 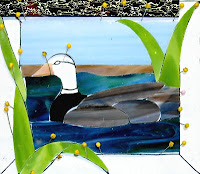 When Janice came in she was hoping to put a border on her window but the glass was out of stock so she moved on to her 3rd window. I'll be the first to admit that we're making these patterns up on the fly so what we did was laid out a piece of paper the size of her background, place the flowers and leaves where we thought they looked best and then traced around them. After making the flowing vines that connect everything we added grain lines flowing horizontally on each pattern piece and then cut the pattern up. Here's what she had about a half an hour into the class. 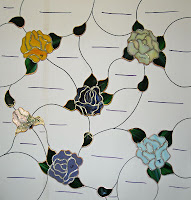 And before Janice left she had all of her background for her third window cut out and most of it ground. Even I was impressed at how quickly she's moving on this! Next she just has to wrap and tack it all together. I hope that border glass gets here soon! 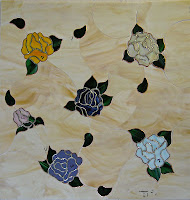 Dianne filled in the few missing pieces to her window and then set upon getting her border cut and attached. By the time she left she was all set to begin soldering. She'll be returning from vacation in a week or 2 so we're going to have to wait a bit to see the first side of this soldered. Since I find soldering to be relaxing I hope this rest of this window is nice and easy for her.

And speaking of roosters, here is Bonnie's Rooster window. You can see a similarity between the 2 windows in subject only as the interpretations are completely different. I love the little barn on the hill. Adding the door and hay loft in the barn created more work but as I always say, the extra work you put into a window always pays off in the end.

Here's Cindy's front door insert all cut, ground and ready to be foiled. I suspect we'll see this one tacked together real soon. She also has most of her other window ground but she left that one at home. Cindy always has to be doing something with stained glass so while this one is stuck here in the shop (it's too big to be transported weekly) she works on a second window at home.

And Anita has begun soldering her LSU window. With the border now in place I'll bet that this one is finished next week. Anita already has about 4 other patterns picked out and lined up to start on so I doubt she's want to spend too much time on this window now that it's so close to being completed. 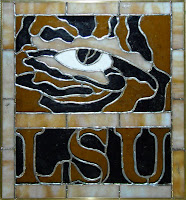 It's hard to see the fancy trim that Myrt cut and ground for her Fleur De Lis window because the glass matches the pattern paper but of you look closely (or click on the picture to make it bigger) you'll see that she got a lot accomplished this week. She's taken the pieces home to wrap so that means she'll be cutting background glass when we see her return. 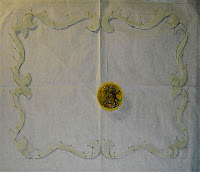 Can you believe I did it again? Fran took her Duck window and left before I managed to get a picture of it. This week, well, look out because I'm going to be snapping pictures of Fran's Ducks every 5 minutes! Rather than repost the same picture 3 times in a row I'll simply tell you that they really look great and the window is taking shape nicely.