This update brings us into the month of December. I have plenty of pictures and I believe I have everything sorted by week now. My biggest problem is remembering who made what project when I look back at these month old pictures.

There's no need to fear--Blue Dog is here! I have to say that Cindy's window really came out nice. It's so vibrant that there's no way anyone can ignore it. In fact, it really reminds me of a comic book panel. Cindy knocked this out on record time but you can't tell that from the quality of the finished project. 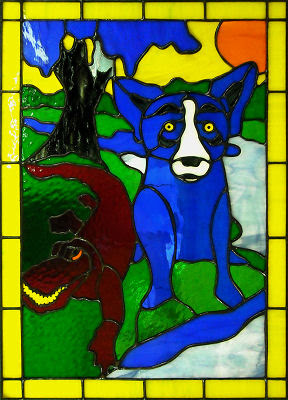 Anita's Symmetrical Geometric Design has really caught a lot of the students eyes. Something like this isn't that difficult to make and it always manages to be an attention getter. These are the kind of projects that we love around here.

Wow, where do I start with Pam? Pam was as busy as she could possibly be hammering out 5 large suncatchers in between classes. This is her Purple Calla Lily. 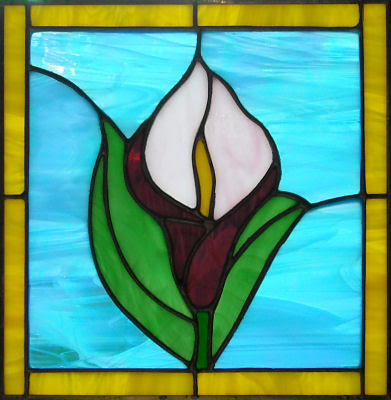 This is her geometric design.

This is her fancy cross

This is her Fluer De Lis.

And this is Pam's Orchid. All of these were made at home by Pam and she finished them all off during class this week. I can really see an improvement in her work as she's finding it easier and easier to keep the glass within the lines on her patterns.

Terry completed her Saints Window and I would have been shocked if she hadn't completed it this week. It just wouldn't seem right if Terry didn't finish a project during class. :-) 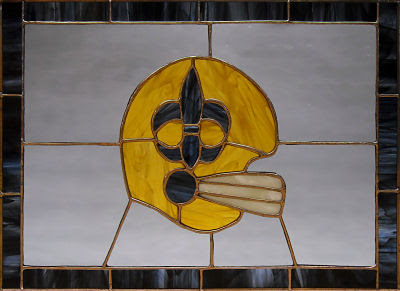 And Susan has another Business Card Holder under her belt. I don't even think she needs the pattern to cut and grind these things anymore! One thing is sure, she has the process down pat.

And when Susan finished her Card Holder she began working on a new Hand Mirror. Here you can see her pieces have been traced out onto her glass where she will begin cutting them at home.

Sonia's Skull Box is really taking shape now. The top is complete-- all it needs is to be cleaned up and colored. That means that there are only 5 pieces left to cut and solder together so she can attach this top and have it featured in the Blog.

Who do you suppose is making this Fleur De Lis? None other than Terry. For someone who's burned out on making Fleur De Lis' she certain has enough people asking for them. Maybe if she makes them upside down it will appear to be something other than a Fleur De Lis and make it a little easier to work on... 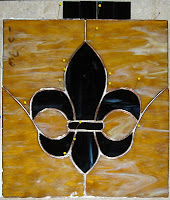 Peewee started on 2 more Fleur De Lis Windows which are essentially the same as he made before only sized up differently. This is one of the FDL's that he cut and ground. The other was at the grinder with him while I was snapping pictures. 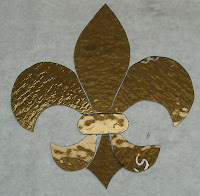 Myrt's been wrapping her glass and it looks as though this window is just about done. Once it's tacked together she'll fill in the sun and cut it into 5 pieces. Then it's just a border and some soldering!

Dianne has the front side of her Victorian styled window soldered and only has the back side left to go. It's amazing how fast people get things done during the month of December-- especially if what they're working on is a gift!

And when Cindy finished her Blue Dog Window she immediately started working on the first of 2 more Boar Windows that she has orders for. Don't get me wrong, I loved the window when she completed it but I never thought that she'd have to make 2 more!

And speaking of animal windows let's take a look at Fran's Donkey window. With only the mouth left to go she's about to wrap this project up shortly. I guess you can say she has her ass in gear!

Anita made this window at home and brought it in to solder it. This is another project that is soldered on the front side but not the back side. We'd finish things much quicker in here if we could find a way to do both sides at once. But for now she'll have to tackle the back side next week. 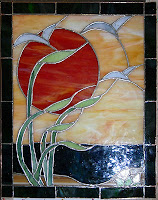 And as a quicky project Anita decided that she had to do something quick and simple with this piece of clear glass embossed with Bamboo leaves and stalks. She just squared it up and added 2 borders around it to frame it all out. These borders need to be wrapped and then they'll only be a little solder to do before she completes this window.

And that will wrap things up in a retrospective look at what happened during classes during the first week of December 2011. Expect a second week update VERY shortly.