I knew I was going to like this box when it was finished-- I could just feel it in my bones. True, it's not you would call a conventional item but it's the perfect Christmas gift for the guy who has everything. Sonia did a great job on this-- even though at first glance you might think, "There's no way that's a skull in a top hat" it only takes a second glance to realize that there's no mistaking that's exactly what it is. 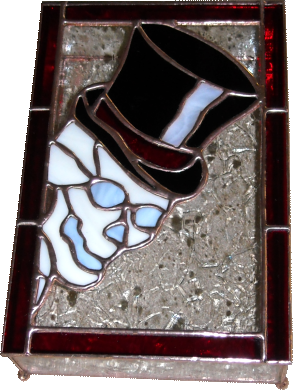 Roxie finished her 2 frames in time for the Holidays and I've put some nice pictures in them to show them off. They looked sort of plain and boring with nothing in them. For the record, they're both the same size-- I just pictured them in both Landscape and Portrait orientations so you can see that they work in either direction. 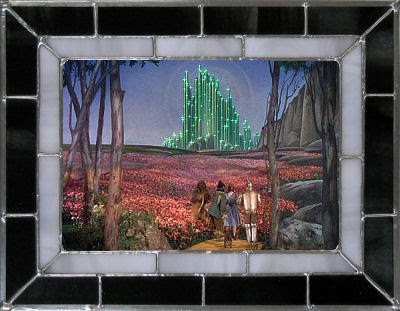 Close you eyes and tap your heels together three times. And think to yourself, there's no place like home. 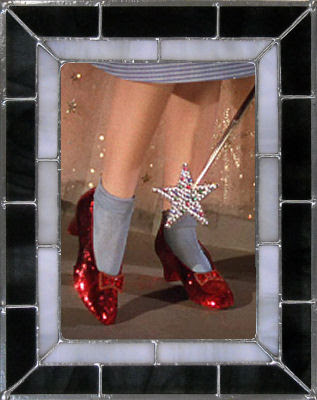 And while we're on a movie theme here, I can't help but call Anita's 1st project this week the 'Finding Nemo' sun catcher. I'm not sure if this is a clown fish or not but it's certainly the correct colors. 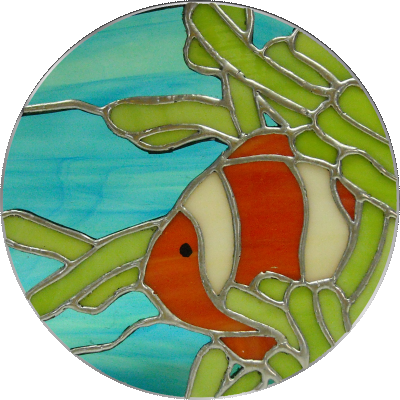 And here's a look at Anita's Bordered Glass Window. She just really liked the design in this clear textured glass and decided that it was pretty enough to hang as is. Well, she did add a double border to give it a little extra something... 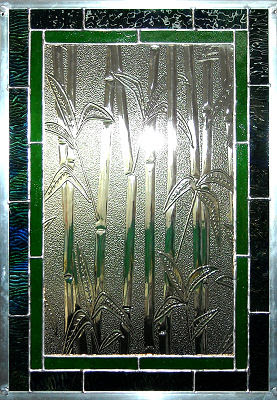 Also, Anita made this small sunflower window as well. But her real project for this week is the next one...

This is Anita's Seagulls and Sunset window. Her Seagulls have a very contemporary look about them making this a classic stained glass window with a modern twist. 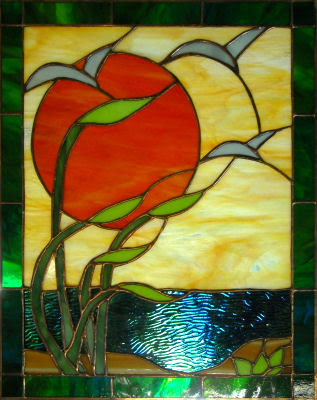 Next up is this week's featured Fleur De Lis. This one was made by Terry and if you haven't noticed, her black border and the actual FDL are made from the same glass used by Roxie in her 2 frames up above. This is always a popular glass and you can see why everyone likes it. Whether she likes making them or not Terry certainly has a knack for Fluer De Lis windows! 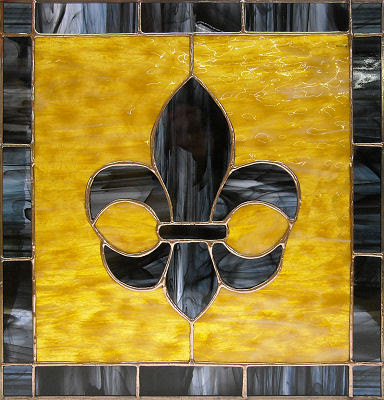 Dianne has completed her 1st Victorian Styled Window. Throughout the building process of this window she's learned a lot and seems to have lost most of the worries that plague students initially. She made this window with a good deal of confidence and very little help at all. This will end up above one of the doorways in her house.

And Dianne already has her second companion window just about ready to be soldered. As I always say-- if you're making more than one of the same window it's best to cut them all out at the same time. When you get on a roll you don't want to move onto another step and lose your momentum.

Wow, look at Terry's Tiger. It's yet another pattern that she drew up herself and I have to say that it is a VERY nice pattern at that. It's almost completely ground so she'll be working on a background and a border next. Talk about a window with personality! Lions and Tigers and Bears, Oh My! 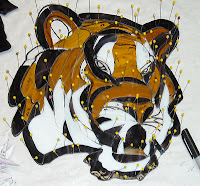 Susan got one of her hand mirrors together this week. This one is ready to be soldered but since the mirror was cut at the end of class we decided that it would be best of she tracked it into place next week so the mirror wouldn't sit with chemicals on it for any length of time. Mirrors are tricky to work with because the backing can get damaged fairly easily and once that happens you have a mirror with black rotting edges rather than a bright shiny mirror.

After Sonia completed her Skull box she immediately went to work on making a second box. She had some of this completed last week but this week her entire box top is completed. That means there are just 5 pieces of glass to cut and tack together before she attaches this top and calls this finished. Something tells me that she really liked the boxes Roxie made since this was cut from the same pattern and the same glass. Imitation is the highest form of flattery!

There are about 5 pieces left to go on this before Patty adds her border. There's a spot on the lower right where the pattern calls for the top part of an oyster but Patty was ready to just fill it in with background glass so she could get this done. Alas, I intervened and have insisted that since she's gone this far with her window I don't want to see her wimping out at the very end and having a big hole in it. Next week we'll fill in an oyster and finish the background.

And here's yet another original pattern. Cindy wanted to see if she could come up with something on her own and she's done a marvelous job! This is a big window at 30 inches long so she'll have to use some zinc channel to finish it off. The zinc channel is far heavier and makes a sturdier window but it also much wider than the lighter brass channel. A window this size needs the extra stability that the zinc channel will add.

Ann has begun grinding the first of her 2 mirror image cabinet windows that she's making. Wait a minute, how can she start grinding them is we didn't even see her start these???? Well, I missed out on taking pictures last week when she began cutting her butterflies. Then she did a lot of work at home and that means she's grinding these already. And when you next see these I think they'll be completed! Ann has been working very diligently on these windows and they are coming together quickly.

And rounding things off here at the end we'll take a look at Peewee's latest Fleur De Lis Window. It's the same design that he made before just with slightly different measurements. He needs a few filler pieces in this one but I'd say he'll be adding a border when he comes in again.

There is only 1 week to go until Christmas 2011 gets here (yeah, I know I'm behind here with the updates but we're getting there!) so come back shortly to see just what gets finished before Santa needs to collect these windows to make his deliveries.