We're backed up again with our posts here but not nearly as bad as before. The Christmas rush is through and all of our students have completed everything that they needed in time for the Holiday. Let's get started looking at what's been accomplished.

Peewee finished his 2 Fleur De Lis Windows. Since they're identical I only took 1 picture but they both look like this. They'll go above 2 different doors in his home and he has a few more to make before he moves on and retires this particular pattern.

Roxie completed her Fleur De Lis box and since this was a gift for Christmas that was certainly a good thing. She kept saying that she wanted to make a classy box and I think her choice of colors made her wish come true.

Anita's Calla Lily Window is out the door and hanging where it belongs. Her background glass and border are both perfect choices making this window really snap. If you look closely you can see that the background glass gives the appearance of rain. 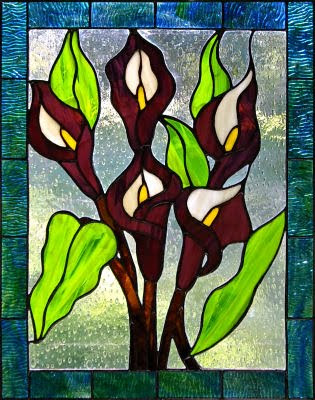 Here's Terry's Fish Window. While she was making this one she decided to make a Red Fish window for her next project. Like I always say, When you're on a roll... 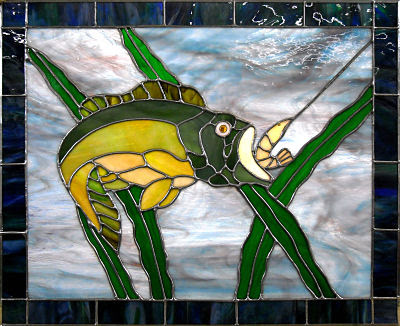 Here's a look at one of Cindy's completed Hand Mirrors. She's been knocking these out at an almost alarming rate so expect to see the entire lot of them soon!

And since Cindy can't seem to get enough glass work into her week she also works on other projects which include this cute little dog tray. It's Cindy's first 3 dimensional piece.

Cindy's last 2 pieces were done at home so I feel obligated to show you what she did during her class time. Here's yet another one of her mirrors going through the grinding process. Only 6 pieces to go and then she'll add the mirror.

Susan was in the midst of making 3 more card holders. The design is slightly altered from the first one she made but by and large these are more or less the same. The biggest difference would be the color schemes. Look to see these completed shortly.

Here's a look at the Red Fish Window that Terry started cutting and almost completed at home. She ground most of this in class and then took it home with her to wrap during the week. As always, Terry works very quickly and efficiently.

Seafood. Patty is getting tired of it but she's a trooper and now that the end is near she's getting more excited at finishing this project. Me, I get hungry looking at this.

Pam changed the shape of this from an oval into a square and needed a little help squaring it up. Once we had it true she wrapped it, tacked it and even got the front soldered. Pam's cutting is getting better with each and every project she does and I can honestly say she really has the hang of it now. 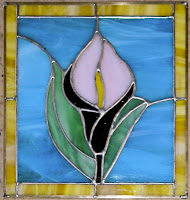 Myrt's been working steadily on her DragonFly Window. The wings have gone through a few changes but she's settled on what you see cut out. She'll add a sky blue to the background be done with this one soon enough.

Grace has been taking night classes for Nursing so getting to Stained Glass Classes hasn't been easy. Still, when she gets the time she comes in and makes great strides on this, her latest window. Grace never takes the easy way out always making windows with little, thin pieces. But in the end they look spectacular. 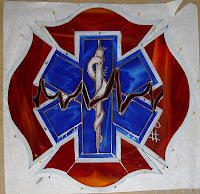 And I must note that I didn't get a picture of the work that Grace's mother, Janice, did this week. She's hard at work on cutting out all the flowers for her next set of 3 windows. When she left she had put all of her work into separate baggies so she wouldn't mix anything up. And nothing looks worse than a picture of some cut up glass thrown into sandwich bags...

Sonia's Peacock Window is so very close to being completed. She's really excited about this window so I can't wait to see her face when she gets to see this washed lit from behind.

Bonnie has begun cutting out 3 small Fleur De Lis Windows and this is the first one of the batch. It's already cut and ground so the lions share of the work on this one has been completed already.

Ann is very close to finishing the second of her Accent Windows. If you look at her last project you'll see this very design mirror imaged in two of the corners of her larger window. She changed the colors since she made this last so this will now match the large window perfectly.

Anita has been working on this Sun window while she's been at home and this week she finished grinding it in class. If you look closely you'll see that she's already started wrapping this.

And lastly we have a look at Diane's 2nd window. She had cut 2 of these out at once and now they're both ground. She plans on wrapping them when she goes on vacation so she won't waste any time getting these completed.

Look for another post tomorrow night. Now that out next Church windows are drawn up and the Holiday has past us I can sit here in front of the computer at night and get things organized in my Stained Glass Class folder.