A Child Of A Man Who Eats Biscuits

A sign of excellence in any art is the ability to be precise. Story has it that when asked by the Pope for an example of his artist skills, Italian Renaissance artist Giotto di Bondone freehanded a circle so perfect that it appeared as though it was drawn using a compass. That perfect circle got him a job commissioned by the Pope himself.

Keeping that in mind, look at these 3 Fleur De Lis' that Bonnie made. All cut and ground separately with a week in between some of them yet I can't see any difference save for the colors. I'd say they're perfect and that doesn't come easy with stained glass. Great job, Bonnie.

Whoa! Look at all the Hand Mirrors that Cindy has made. I count 22 of them but there's no telling if all the mirrors she made managed to make it in for the class picture or not. Nonetheless, Cindy's got the patience of a saint because making 22 of anything always has me ready to be put in a straight jacket and hauled off to the funny farm. Hey, if she had dropped the box of them on the way to the car and they all broke she would have had 154 years of bad luck. But she didn't...

And up next is the last of our completed windows this week. Terry finished her Red Fish and it looks like it's about ready to clean and eat! When her dear friend Sir Donnchad Horace Wellington, more commonly known as the Duke of Wellingtonshire, was looking to commission a stained glass window Terry cut out a perfect convex quadrilateral which impressed Donnchad so much that he had her make this fish window for his Den of Iniquity. (Come on now, you don't REALLY believe that do you?) :-| 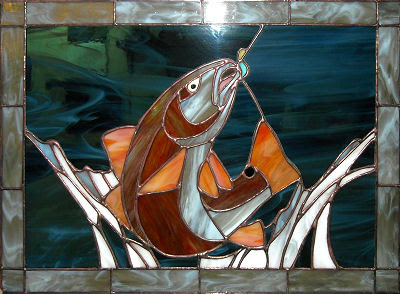 Terry, who's getting burned out on making Fleur De Lis, decided to make a Saints Football Helmet Window which incorporates a... (wait for it) ...Fleur De Lis as the helmets emblem! Well, at least it's not the focal point which could explain why she's managed to get through this window so quickly. The brass channel is on and there's only the backside left to solder. 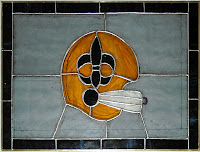 As well as making numerous mirrors, Cindy has been working on her Blue Dog in the Bayou Window. As you can see it's almost finished now with only the back side left to solder. The teeth of the 'gator are going to be interesting as we'll be making them with foil and then covering the foil with lead. Stay tuned to see how that all works out.

Okay, here's the part of the Blog where we cover Anita's THREE windows this week. We'll start by taking a look at her circular Geometric Window. It's all together now and like Cindy and Terry's windows this just needs some solder on the second side and then a channel to surround it before she wraps up this project. 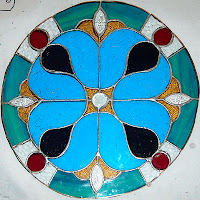 And it looks like circles agree with Anita because she cut out this cute Finding Nemo-like suncatcher during the week and brought it in to class to grind.

Lastly, to wrap things up we take a look at Anita's Sunflower Window. She cut the border in class and got it ground, attached and then channeled. She'll most likely complete this one at home so expect to see this one completed during her next class.

So that's about it for this edition of our updates. Look for a follow up tomorrow as we try to catch up to what's been happening with our students in 2012.