Let's hope there's no truth to old superstitions because here in the shop we're been breaking an awful lot of mirror lately...

Speaking of mirrors, Roxie went a different direction with her Flower Hand Mirror. Instead of using traditional greens she went with browns and tans for her colors and the results are even better than I initially suspected they'd be. And I'm not the only one who feels this way because all of the students who saw this while it was under constrution commented very favorably about her use of colors. Roxie liked it so much she's decided to make 4 more rather than just 1 more!

Terry's latest Fleur De Lis window is another winner. Her attention to detail really makes this stand out because all of those diamonds in the center Fleur De Lis could have easily made the overall design become misshapen after it was wrapped. But since she paid close attention to her pieces as she wrapped them and reground sections to adjust for growth due to all of the foil it all lines up perfectly. Terry's at the point where I no longer need to touch up her soldering so I'm more than proud of all that she's achieved here in class with us. And then there's her work itself. See what I mean... 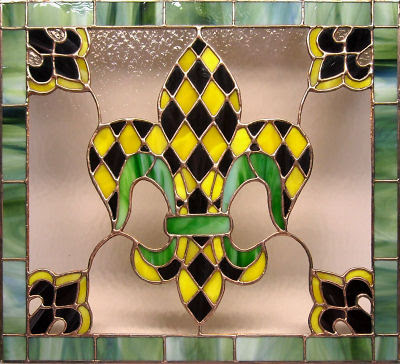 Peewee and Dianne both completed their Fleur De Lis Transom Windows this week. There's a SLIGHT variation in the two windows that you'll only see if you pay attention to how the borders have been cut. This was done to minimize the amount of glass wasted so we could stretch more usable pieces out of each strip of glass. Since both of these windows are going in different rooms they don't need to be perfect matches. The top one here is Peewee's window.

And this one is Dianne's. The glass used in the borders is the same on both of these windows but the difference you're seeing is due to the lack of light behind the darker one since that picture was taken indoors with fluorescent lighting and the other was taken with sunlight behind it.

I don't know if you've noticed but Hand Mirrors really are the rage here in class and Susan keeps on knocking them out every week. This is her latest Leaf Mirror which, as I mentioned before, is her own design. Kudos to Susan for taking the initiative and redesigning a pattern to make it suit her needs better. This is what I like to see students doing.

Denise has been more than busy at home. This week we take a look at an LSU window that she's made. I think this may be the first one we've seen completed with the tiger paws on it. 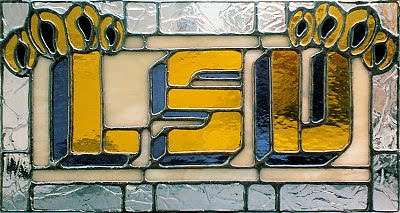 And Myrt has more than half of her window ground this week. Her Rooster is a combination of 2 other patterns that we had here in the shop. Add the big difference in the size of this window when compared to the other 2 and you have a window that has a very different look altogether from what we've seen before. 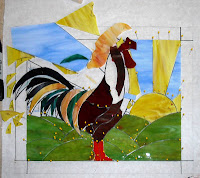 Sonia saw this pattern in a book and just had to make it. It didn't strike me one way or the other until I saw her glass choices. Now I believe that this window is going to really POP! Once the ladies are cut out the rest of this should go together easily. 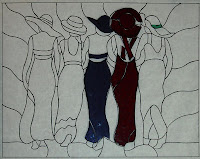 Now that Patty has completed her Seafood window she's decided she wants to make something quick and simple. 5 piece cabinet door inserts fit the bill nicely but then she decided that she would be making 8 of them which means that she won't exactly be finishing these next week. But she should move VERY quickly on them nonetheless. This week she decided on the actual design and then she traced, cut, ground, and wrapped the center diamonds for each window. The glass you see underneath the diamonds will be the color of her background. 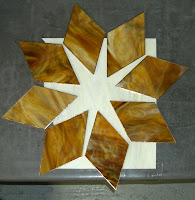 Cindy's Sports De Lis window is closely nearing completion now. She'd only got the background left to cut and then the border pieces. She's leaning towards a double border but hasn't quite decided for certain yet. It will be easier to see what it will look like during her next class when she can lay her border colors along side the finished center of this window. 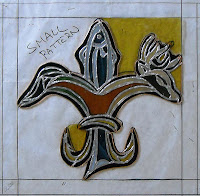 And Bonnie's Saints De Lis now has its first trim border on it. She started with white and will finish the FDL off with another thin black trim. She's tacking this together as she moves along because with thin pieces like this we don't want the window shifting and causing the center piece to become unsymmetrical. All it takes is to be just an eighth of an inch off to make this look lopsided.

Lastly, we have a look at Terry's newest window. This is yet another pattern that she's drawn up herself. It's a Caduceus window with a flame on top of the staff. This is all ground and ready to be wrapped and tacked together which means we'll be seeing this window completed VERY soon now. 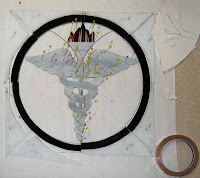 And that about wraps thing up for this post. We'll have a reduced set of classes for out next post so we won't have quite as much to look at but we will have one finished project and that always makes it a good week.