I Can't Believe It's Not Butter

Cindy's Sport's De Lis Window was completed this week and her attention to detail is wonderful. For some reason she enjoys working on windows with tiny little pieces so when she made this she decided to use the smaller of the two patterns that we had. What you see is a duck head on the left, a fish in the center and a deer head on the right. The bottom of the Fleur De Lis is formed with the tail of the fish in the center and two mirror imaged fishing hooks. We've seen this done before using just 2 colors but Cindy decided to give each animal(?) its own set of colors making this window stand out from the other times we've seen it done.

Cindy also worked on a Fleur De Lis type window which we'll see later on in this update. 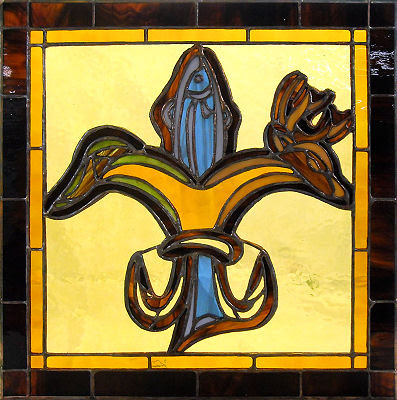 Susan's variation of the Flower Hand Mirror is now officially known as the Leaf Hand Mirror. She's made a few of these now and when Bonnie asked if she could make one in a single class I said that I thought she could but that I didn't have the pattern. I figured that Susan wouldn't mind so I ended up drawing this one from memory. Bonnie was originally going to have a beveled diamond in the bottom but when she saw what the mirror looked like with the accent color in the place of the bevel she decided she liked that better. I thought it looked good both ways but the colored diamond looked best. 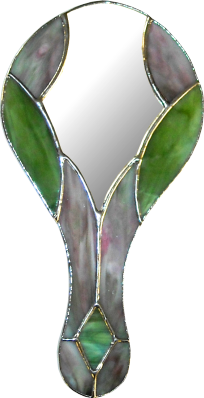 Pam worked on this window last week and then finished soldering it at home. When she brought it back this week she only needed to color the lead and then have me take a picture for the Blog. It's a really cute window with a great antique feel to it. The colors on this one really work beautifully together. 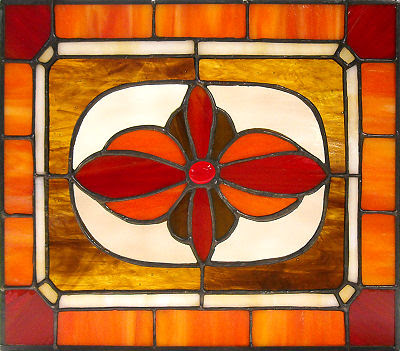 Pam also had the star part of this window cut, ground and tacked together when she walked in the door. By the time she left class she had it finished save for the soldering. I'd say we'll see this one completed in our next update. 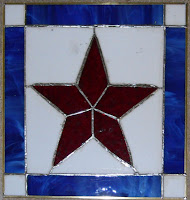 Susan took a break from hand mirrors this week and began working on this Fleur De Lis Window. She's got it all cut and ground and she's taken it home with her so she can come back with it all wrapped and ready for tacking. Then it will only need a quick 6 piece border and some solder so I have a feeling we'll see this project completed when Susan returns. 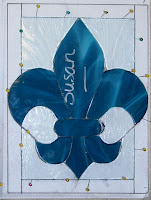 Roxie liked the mirror that she made last week so much that she's decided to make 6 more. She cut the brown glass for all of them this week and has a a slew of flower petals all traced out and ready to be cut. Although she loved the colors of her last mirror she's decided to make the flowers in these in different colors. We'll see those colors as she progresses with her cutting and grinding.

Dianne and Peewee have both begun working on a new transom window using the same design of the last 2 that Dianne made. The only difference is that this one is about 2 inches taller than the others so although the design is the same the it's been stretched accordingly to fit the new transom opening. I have to say that the colors are great and slightly reminiscent of Pam's window that we saw at the start of this post.

Patty has cut the backgrounds for two of her cabinet door inserts and has them ready for soldering. Since these are her first two I'm going to go out on a limb and say that once these are finished she'll be able to complete the next two in a single class. You just need to get the first 1 or 2 under your belt to get a handle on how everything goes together and then you can reall speed things. Mark my words. 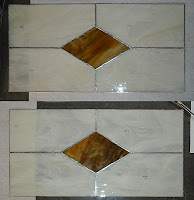 Terry's latest window is a difficult one to name. It's got the state of Louisiana, a Tiger's eye, a Fleur De Lis and a Red Pepper all rolled up into one widow. It's hard to see what it will look like right now since none of it is ground yet, but you'll be seeing how this all fits together real soon. Terry isn't one to spend too much time on one project! (You can't miss that Tiger Eye in it though, can you?) Myrt has most of her Rooster Window completed now. There's just a little soldering to do on the back side and I have no doubt that will be completed when we next see her. This is a nice light, almost pastel version of the Roosters that we're used to seeing. I love it when people put a new spin on a pattern by selecting different colors. 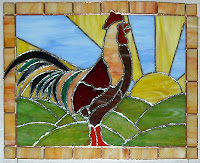 You may not be able to tell but this is the back side of Fran's Donkey Window (insert your own joke here). With the front all soldered she can now handle the back of this window at home and then bring it in next week so we can wash it outside (it's too big to fit in the large sink that we have in the shop) and then finish it all up. I can't wait to see this one lit up.

And here we have a look at the other window that Cindy is working on this week. Let's just call this the Tiger Eye De Lis Window. With just the last black border left to tack on and solder I'm guessing this will also be completed during Cindy's next class. She really does like to work with all of those small pieces, doesn't she? And she makes it look easy! 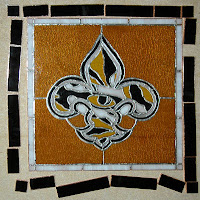 Lastly we take a look at Ann's Flower Hand Mirror. She really liked this one and decided to make one for herself. She's chosen an almost teal-like color for the leaves which sets this mirror off nicely. Since this is all ground and she's started wrapping it I'd say this will be finished next week along with all the others I mentioned.

We'll have another update coming shortly with 4 more completed windows on either Wednesday or Thursday. Our students are definately on a roll here!