Two's. I think that's the theme for this week and you'll see what I mean by the time you finish reading this post.

Ann made quick work of these 2 cabinet windows. I wish I had the wooden frames to show you what these look like installed but I think it's safe to say that these pictures show off Ann's work perfectly. The mirror image design looks so much better than 2 of the same window. Ann worked on this while she was home which explains how she accomplished completing the pair so quickly. 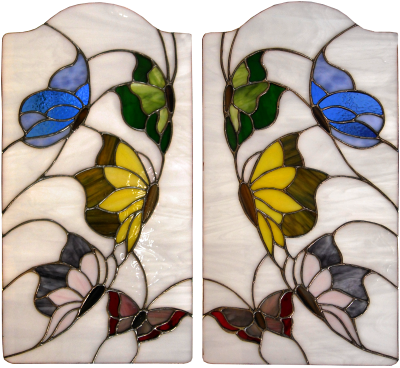 And speaking of pairs, this next project is the sister window to Dianne's first one that she finished just a few weeks back. I was going to say that since they are being installed in 2 different rooms she didn't make mirror images but I just realized that maybe they are... After all, it's a symmetrical design which means that making a mirror image wouldn't have any effect in the final look of the window. But no matter how you look at it, this is another beautiful project made by Dianne.

It's funny to see how many repeats we have this week. Here's a look at Cindy's latest Boar Window. It's the second time she's made this pattern. Actually, this design was the first window she ever made. And don't forget it because you're about to see it again real soon... 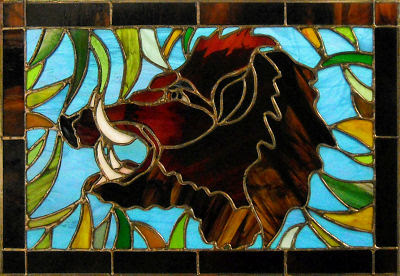 What do two Irises, two Cat Tails, and a Dragonfly do in their spare time? Aside from hanging out in Myrt's window I'm not really sure. But they make a really fine window, don't they? As I've said before, I like the way Myrt took the pattern and made changes throughout to make it her own. Myrt's next window will be a Rooster design. 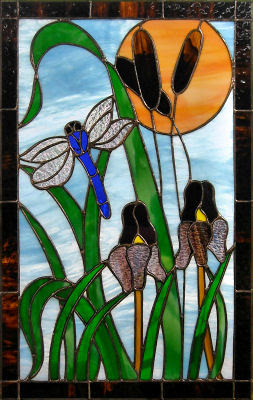 Anita made this cute Teddy Bear Frame because she simply wanted to make a frame. Until you see how the back is put together most students think it's a mystery that ranks up there with how the Pyramids were built. Well, it turns out it's only about as mystifying as crop circles-- once you know the secret it's no big deal at all. This Frame features painted eyes, a wire mouth and a picture of cute tree drawn by a child that I found on the internet (the tree, not the child!) 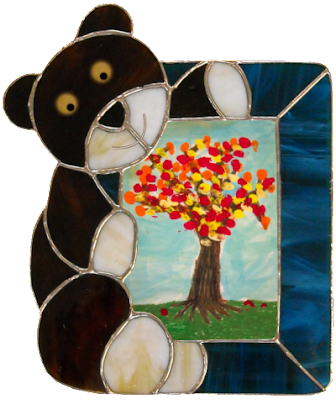 Here's the first completed Hand Mirror of Susan's new design. The Flowered Mirror is very nice but until you make one you don't realize how time consuming they can be. Susan's design was not only drawn up by her, it's also quick, efficient, and beautiful in its own right with only 10 pieces in it. Expect to see more of these soon.

Well look at that! I told you that Susan's new Leaf design was quicker to put together than the Flower Hand Mirrors and now here are 2 more of them already ground and ready to be wrapped. Susan's turning into a hand mirror machine!

And just for comparison we'll take a look at the Flower Hand Mirror that Roxie's been working on. She's all ready for solder so I'm going to say that this will be completed when Roxie returns in 2 weeks. While we're looking at her mirror we can see that it consists of 24 pieces altogether. And since they're small they take a while to fit together but the end result is well worth the time.

Are you seeing double yet? If not, take a look at Cindy's latest Boar window. This is the third time she's made this one and most likely her last time but we aren't going to retire the pattern just yet because we never say never here in the shop. This one has slightly different colors but I couldn't possibly chose which one I prefer more. I still can't believe how fast she got this one together!

Terry's latest Fleur De Lis Window has almost completely taken shape this week. The actual FDL is wrapped and ready to be tacked together and that's truly the lions share of the work. She's cutting and grinding the small FDL's which will go in the four corners and then she'll cut her background and complete this window thereby putting another Fleur De Lis under her belt. 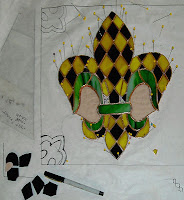 Here's a second Fleur De Lis design being worked on by Bonnie for her husband. She just started this one tonight and got the pattern traced out and all the gold glass (gold is so tricky to find in glass) cut for the center of the FDL. She'll be working on this in layers so she'll grind, wrap and tack what she has completed here before she moves on to the first of her thin FDL borders which will be white. 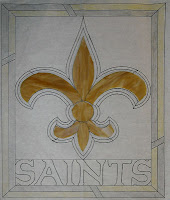 Anita worked on this Star window when she completed her Frame. Actually the red star in the center was completed at her home and she did the background and thin blue inner border during class. Her outside border has also been cut but most of it was with her at the grinder when I took this picture (you can see one of the outer border glass pieces along the bottom of the window) 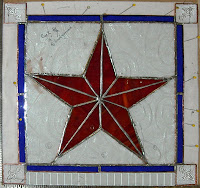 Now you don't think that was all Anita did this week do you? She also worked on getting this small LSU window cut and ground. Now that it's wrapped she just needs to add a border before she can call this one completed.

And bringing up the rear this week (last but certainly not least) is Pam's Geometric design. If it looks familiar it's because it's the second time this pattern has been used also. If you recall, Anita was working on the same window in different colors a few weeks ago. Now that I think about it we never saw hers completed so I'll bet that Anita finished it at home and then hung it up. But we'll surely see this one finished when Pam returns to class. 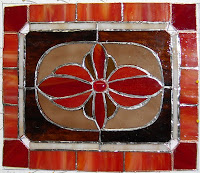 And that ends things this time around. It's amazing how many repeat windows we saw this week but that only goes to show you that imitation is the sincerest form of flattery. Besides, color changes alone can make a window practically unrecognizable from it's first appearance.