May we have a drum roll please because Patty has completed her Seafood Medley Window! It's vibrant, it's fun and now Patty is moving on to windows with bigger pieces which can be even more fun (to make). :-) Looking at this window makes me look forward to a good pool party complete with crawfish, crabs, shrimp, oysters, potatoes and corn on the cob.

Susan finished 2 of her newly designed hand mirrors-- one in blue and the other with 2 shades of teal. She's moving right along on these mirrors largely due to the fact that she made a difficult project much easier while maintaining its beauty. She was going to go with single colors for her mirrors bu she mixed some of the pieces up and discovered that a 2 tone mirror looks great. 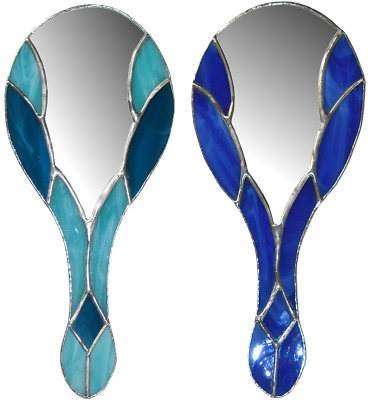 Anita has a few things to look at this time around and we'll start with her small LSU window. It's the smallest one I've seen made yet (at about 18" wide) but all the work is still there which is why it doesn't look small in the picture.

Anita also completed her Star window. Have you noticed the small Fleur De Lis' in the corner pieces? You won't see much of them in the future because it's a discontinued glass (everything we like gets discontinued) and with this window Anita has used the last of it. 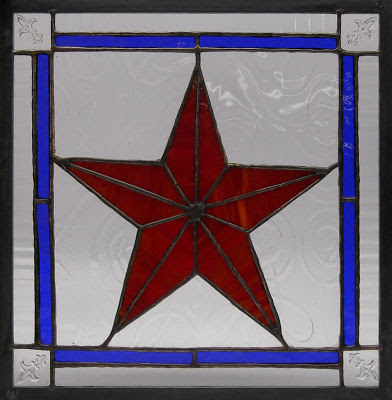 Cindy has put the final touches on this, her 3rd Boar Window. I'm thinking that she can put these windows together in her sleep since she knocked this one out so quickly. But I also have a feeling that we won't be seeing this pattern done again for at least a little while. Cindy is looking for more challenging projects and I do believe she has found them. 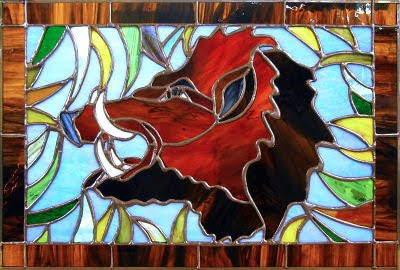 And this just happens to be one of those challenging windows that Cindy has decided to make. This pattern was drawn up in 2 different sizes (medium and small) and she decided to do the smaller of the two even though there was a message on it saying to do the larger of the 2 instead. lol. Her Sportsman's Fleur De Lis will be done differently then the previous 2 we've seen made in the past because Cindy is making her FDL in numerous colors rather than just 2 colors. 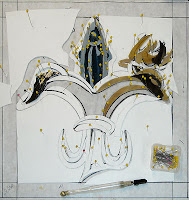 Terry's Fleur De Lis Window may contain the most pieces in a single FDL. That said, it's just about finished. It's all tacked together and the only thing left for her to do is to solder it. And since she solders at home I suspect we'll see this completed when she comes back into class in a week. 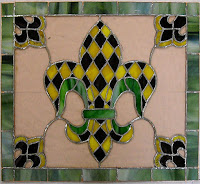 Meanwhile, Myrt is flying through her Rooster Window. It's already all cut out and in her next class she'll begin grinding it. Although she's moving quickly she's still taking her time cutting out her pieces because she knows that the extra time spend on cutting will be gained back two-fold when she grinds this. She's cutting off the line as she cuts her pieces which makes this window fit so well together that she won't be grinding so much as skimming her pieces. You can see that this rooster pretty much fits together already and she hasn't even ground a single piece yet. 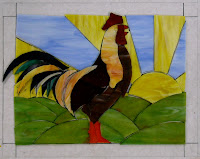 Bonnie's Saints Fleur De Lis Window has it's first of 2 inner borders cut. She started the class grinding, wrapping and tacking the gold center part of the FDL and then cut the white to thinly trace around the gold. And like Myrt's window the white pieces almost look like they've already been ground-- but it hasn't (yet). She'll grind and tack the white pieces during her next class and then set out working on her final trim border in black glass.

Ann's Hand Mirror is all cut out and she'll be grinding this when she returns. Once it's tacked together she'll drop a piece of mirror under it, trace out the opening, cut it, wrap it and solder it all together. The beauty of this hand mirror is that once it's ground the rest of the process for completing it is quick and easy.

Peewee and Dianne both had the Fleur De Lis' cut out already for their windows so when they came in they cut their background pieces, wrapped them and then tacked them all together. Then the strip cutter made quick work of cutting their borders. By the time they left for home they were both at the same point in their windows. Here's a look at Peewee's window with the border ready to be wrapped.

And here's a look at Dianne's window. It's sort of hard to tell them apart but I recall that Peewee was working on top of a white piece of paper which makes his clear glass background looks white while Dianne's looks more like a ceiling tile since that is what her's is lying on . :-) They've both moved really quickly on getting these windows this far along and they may very well be finishing these when they return for their next class.

I must confess that we're still not completely caught up here in regards to what's happening in our classes but at least I'm not falling behind. The next post looks to be an easy one so we should have it up before classes for this week are over with (on Thursday night).