Take a long hard look a Myrt's Rooster Window because this is the last time you're going to see it here now that it's finished. She did such a great job on this which includes her soldering it. I think I just nit picked and made 2 or three adjustments that could have truly been left alone and then she colored it and took it home. What's next for Myrt? We'll know soon enough... 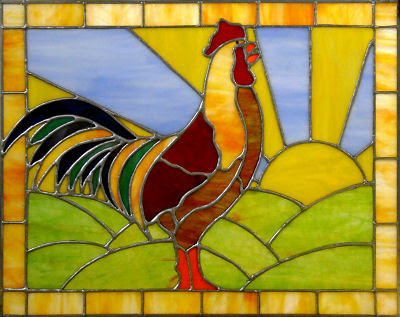 Up next in our completed projects section is our latest Hand Mirror made by Ann. She's turning out excellent work and the mirror shown here certainly proves it. Wouldn't any woman like to see this sitting on her vanity? 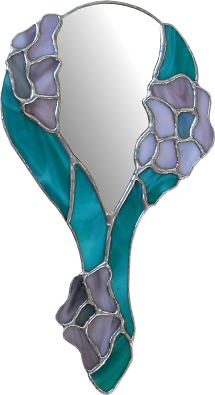 Pam's Star Window also turned out nice but then again wasn't that to be expected? She simplified the pattern SLIGHLY and got this completed in record time. It's definitely one of the more patriotic windows we've seen done in a while! 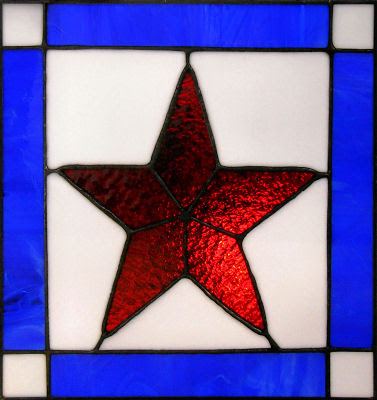 And Cindy's Tiger Eye De Lis was also finished this week. I added some hooks to hang it and then Cindy washed it and tried to decide if she was going to color the lead either copper of black. At first I was going to suggest black but then everyone in class agreed that leaving the lead silver was the best way to go with this window. And although I rarely leave lead silver I will admit that in this case it was a great decision. 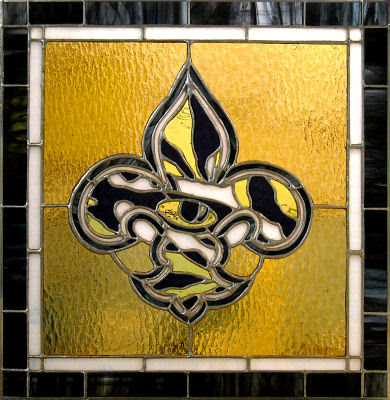 Cindy hasn't given up on Tiger Eyes just yet. This is her latest project and you can clearly see a Tiger Eye in it (as well as another Fleur De Lis!) It's looking great so far and I can't wait to see how much further it is towards completion next week. 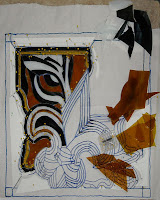 Here's Terry's version of the same window idea. Terry simplified the Fleur De Lis section by removing 2 of the thin borders around the FDL but then she added a Red Pepper to spice things up in her pattern. :-) Terry already has this almost completely ground now. 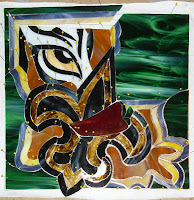 And while Terry was working on her glass at home her grandson, Calieb, decided that he wanted to make a John Deere window. Terry drew up the emblem and let Calieb start cutting and grinding. When she came in to class with it this week all it needed was a border. Now that the border is cut she's bringing back to her grandson who will finish this off. 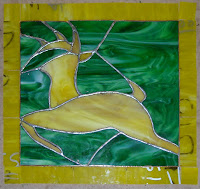 Fleur De Lis' are something we never get tired of doing around here. Bonnie's Saint's Fleur De Lis Window has really taken shape now that the center piece is all cut and ground. The rest should be fairly easy. Look how nice and symmetrical Bonnie has managed to keep this window. I think she'll be cutting her letters next week which will really make this look like it's about finished. 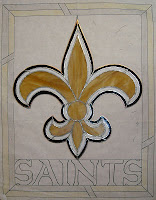 Dianne and Peewee have all of their glass cut for the latest Transom Window they are working on. With the center tacked together and only the border left to wrap they've decided to take their pieces home with them so they can get to work soldering this when they return next week. The colors are impeccable on this window.

That's about the latest that's fit to print here in the shop. We've completed on of the new Church windows and I hope to have a picture of that as soon as the sun co operates with us! Take care and come on my again soon to check out the progress on all of our students work.