Feed It To The Dog


Cindy's Celtic Knot Window is an exercise is precision glass fitting.  Round, symmetrically uniform visually stunning and colorful without being overdone, there's just nothing to fault in this window.  And the speed with which she knocked this knot out really impressed me. 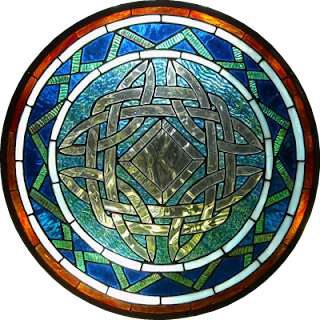 Myrt made it back this week and she didn't come empty handed.  She brought in two completed projects that just needed some hooks and then resumed working on a project that she had to set aside a while back.  This is her finished Fleur De Lis with a Ribbon Border and I have to say that her soldering was VERY good on the two projects that she worked on at home. 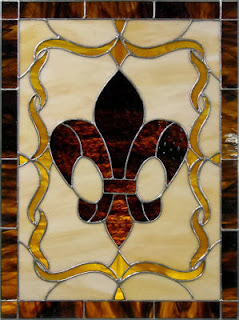 This is Myrt's second completed window this week.  It started off life as a suncatcher project but then she decided to turn it into a bordered window.  That was simple.  She just added 5 pieces of background glass and then a border to finish it all off. 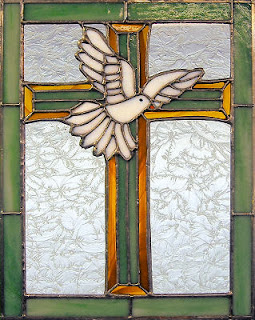 Terry completed her two Cross Geometric windows that she started last week.  The coloring on the first one is different from what we normally see and it really did add even more emphasis to the white cross in the center. 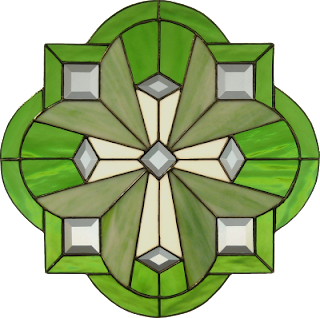 Terry's second version of the window is more standard in it's color scheme but there has always been something very appealing to me when it comes to granite back red on top of clear granite.  These two window feature great work by Terry all around. 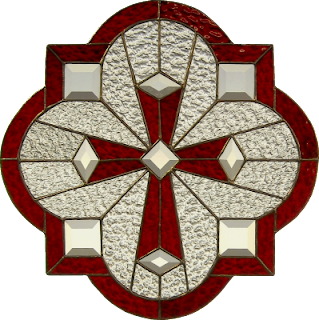 Becky has finished all of the glass work on her horse window.  With the final round border now attached all she has to do is add a bead of solder to finish it.  She managed to almost completely solder the front side of it while she was in class and from what I can see her soldering is exemplary!  Then she resumed working on her smaller Fleur De Lis Window.  She's decided that what it really needs is a ribbon border so we'll have that drawn up for her when she returns next week. 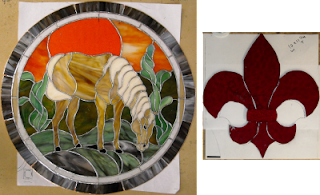 Next up we take a look at the four of the seven candle holders that Bonnie started this week.  After cutting a series of 1 inch strips she then shortened the strips into four various sizes to create  what you see in the picture below.  Each of her candle holders will be a different color --these are just four of them.  Bonnie cut 112 pieces, ground them and has taken them home to wrap.  Nice work! I suspect that we may see one of these completed next week which will enable you to see exactly what she's assembling here. 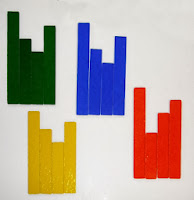 Brenda would have had this window completed this week but as luck (or was it misfortune?) would have it she discovered a tiny crack in the lower right part of her cross.  Sadly,  we didn't have any more of that glass in the shop to replace it with and Brenda didn't bring the glass into class  so she knocked out the broken piece and will finish this at home by placing the glass under her project and tracing the outline of the missing piece, cutting it out than soldering it into place. 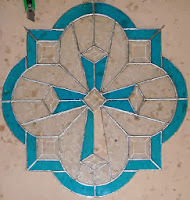 Cindy started working on another LSU window but discovered that she left her pattern pieces at home.  (I distinctly remember that happening to someone else this week but I can't remember who it was.)  Rather than trace the paper pattern out yet again Cindy decided to cut her transparent pieces by placing the glass on top of her pattern and then tracing the outline of the pieces onto it.  It seems to have worked well for her because the lower left tiger eye is all cut and ground!

Janet resumed grinding her Fleur De Lis Window and when that was completed she had a quick refresher course in wrapping glass.  With the sticky side of the foil facing upward she began wrapping her pieces and I must say that she managed to not only center the foil but to also smooth it out perfectly as well.  Your soldering will only ever be as good as your foiling so this is a very important step in the stained glass process.  And I suspect that she'll begin soldering this window next week.

Jeanne came in, finished wrapping the remaining pieces of her final purple border and then tacked it onto her window.  Then we added the brass channel that surrounds (and protects) the outer edge of the piece and Jeanne began to solder.  Everyone panics when they hold the soldering iron for the first time and there really isn't any need to.  The solder will practically flow itself if you just take your time.  And in the end Jeanne did wonderfully.  With the front side almost finished she'll certainly complete this next week.

Linda F has started a new project this week and it's a Fleur De Lis  pattern that she's using Baroque Glass with.  She's got the FDL cut out as well as the background glass which means that she'll need to grind and tack it together next before cutting her border.  She was worried about using baroque glass since the front side is heavily textured but she made out just fine.  Hopefully her fear of baroque is behind her now! 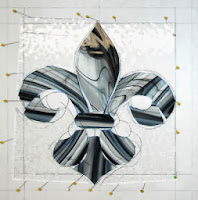 Lynn is back!  She was pretty sure that she wanted to make a panel lamp but the style she planned on making was undecided.  After looking through books for ideas she decided that she really liked the Peacock lamp and after making an adjustment or two concerning the length and width of the lamp we ended up with the pattern you see below.  12 repeats of three separate pieces are going to make a panel lamp that will look as though it was made on a mold.  She's most likely going to use a traditional tan/amber color scheme and cutting will start (and most likely end) next week.

Martha also made it back to class this week after a two week hiatus of sickness and vacation (not concurrently, thankfully).  It was great to have her back as she resumed working on her final three cross windows.  With all the backgrounds cut and ground (and one even tacked together) all that's left is to attach the borders.  The end is near and Martha is saying No More Multiple Projects!

Mary began cutting out what she says is her last Beveled Cross Window.  When she got to the border she couldn't decide what color to use so she's going with the option of forgoing a border altogether.   The design will support itself without one and there's even a place to hang it from so we'll see what it looks like.   She's begun wrapping it and will most likely finish this when she returns next week. 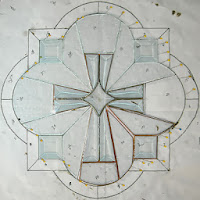 Susan's Abita Window is really starting to take shape now.  And in terms of square footage she has almost a third of it cut out already, however,  piece-wise she still has a way to go since the rest of the window consists of MANY small pieces.  Her background glass is something that needs to be stretched out as much as possible since she has a limited amount of glass.  She's  going to cut all of the larger pieces first so she can cut the smallest pieces out of the scrap.  This is always the most efficient way to cut glass. With the surprising amount of small background pieces in this design it's truly the best way to handle the situation.

Terry came in and saw a pattern I had drawn up for Betty hanging on the wall and decided that she needed to make it before she did anything else (especially since Betty won't be in next week and therefore won't be needing the pattern right away).  So Terry got everything cut out save for the border (which she will do last anyway).  She's already made short work of this window. 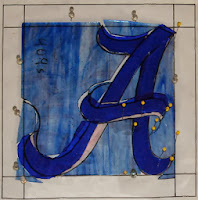 And Myrt, having completed the two windows she'd been commissioned to make, resumed work on her Hot Air Balloons Window.  With everything tacked together and the zinc channel attached the only thing left to do is solder this and she made wonderful progress on that while she was in class.  I did a quick refresher soldering course with her (as I've been doing with almost everyone) and what she soldered looks absolutely beautiful. 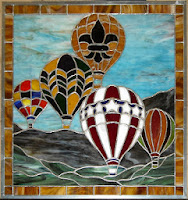 Our classes are really humming along.  There are more and more projects in the works and our students are moving onto bigger and more technically advanced patterns.   I never know what's going to walk in the door anymore and I can't wait to see what next week brings!