Put a Little Rax on the Wag

I hate to be the bearer of bad(?) news but Christmas is almost upon us!  That means that  if any of our students are thinking about making gifts they should probably buckle down and start working on them.  With only 9 weeks to go before the 25th gets here (possibly less due to Thanksgiving) it would be best to get Christmas items out of the way.  I know from experience just how hectic things get in classes during December-- it ain't always pretty!  lol

Becky has finished her horse window and it's turned out to be everything we thought it would be.  This is only her second project but her attention to detail is amazing.  I'm talking about things like her lines lining up when another price of glass bisects them, her even foiling, and her perfect soldering.  Becky plans on making another horse like this in the future but right now she wants to move on to something different. 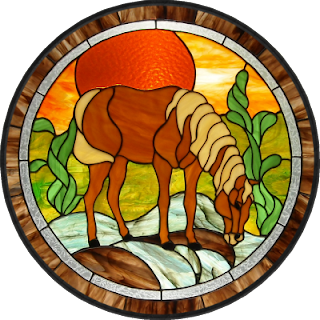 Ann's latest hand mirror is a stunning success.  She changed up the colors in an orange/red motif and I think it's very autumny  (is that even a word?) and I really like the look.   Of courese, being a mirror it will look differently to everyone who looks into it. A great job, Ann! 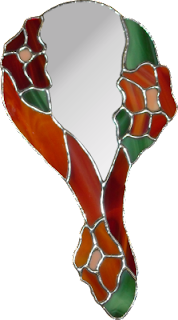 Bonnie completed the first of her seven candle holders. She (obviously) started with the yellow one and has two others soldered and tacked together just waiting for the bottom glass base to be inserted.  I've heard a few other students mention that they wouldn't mind making one or two of these so Bonnie may have just started a trend. 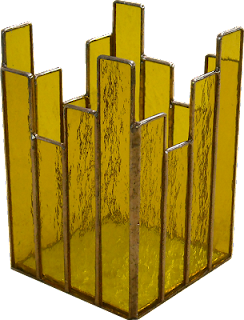 Mary put the finishing touches on her latest variation of the Beveled Cross Window.   The changes she made do nothing to detract from the window at all and the clear glass and bevels really shine in the sunlight.  It has a slight;y greenish tint to it because of the grass in the yard behind it, but trust me when I say that this window sparkles. 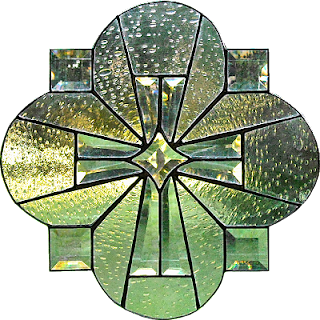 Next up we take a look at the Fleur De Lis Window that Brenda made.  She made this one almost entirely at home and brought it in for hooks and to see if anything needed to be touched up.  All I can say is that her soldering is superb!  In the end all I did was add 2 hooks and take a picture.  please not how perfectly symmetrical the FDL is--this is SO important in a window like this. 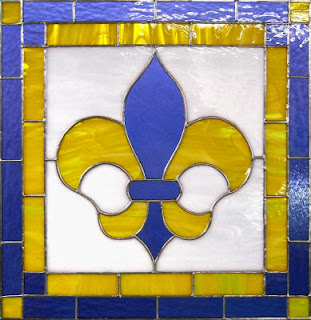 That about wraps up the finished windows that we had this week, but there's still a lot of windows in progress that we need to show you.  We'll start those off with Cindy's latest LSU design.  The center of this is pretty much completed and the only thing Cindy needs to do is tack a border around it.  The border is already cut and ground so I'm sure that Cindy will put the finishing touched on this before it comes back to class to get it's finished picture taken. 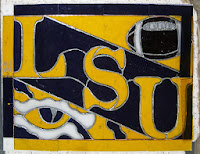 And susan's Abita Window is REALLY taking shape now.  There's a lot of work in this one and I'm impressed with the speed and precision that she's tackling it with. This week she cut the remaining brown background followed by the green hops in the upper right corner.  That leaves only three sections left to go.  Susan was going to use a dark brown for the lettering but I think she's decided that a lighter tan would stand out better in all that brown (as well as match the logo).

Janet resumed work on her Fleur De Lis window and before it's even been completed the pattern has already been swept out from underneath her window and copied so that other people can make it.  This is Janet's first window with us and I believe that it will be completed when she returns to class next week.  I say this because she has her front side almost completely soldered (save for the border).  And I hate to sound like a broken record but Janet's soldering is amazing for a new student.  The secret is to take your time and Janet seems to have found the correct pace because her window is looking flawless. 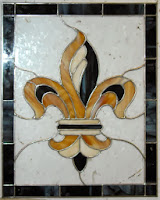 Linda F continued working on the Fleur De Lis Window that she began last week.  She started class by grinding all of her pieces and by the time she left she had it almost completely foiled.  Once this is tacked together she'll only need to cut her border (which is already cut into strips) and then she'll be able to start soldering this.  It looks like Linda will be starting a new project before we know it. 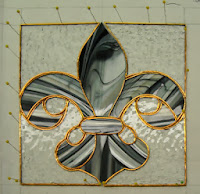 Next up we look at another project that is moving along quickly.  Lynn's lamp is all cut and ground so it's just waiting to be foiled before she tacks it together and puts the finishing solder bead on it.  I will confess that a small mistake was made when she was cutting this out.  Mixed up pattern pieces put the darker color in between the light and medium colors which wasn't the original plan.  It was something that she could have fixed without wasting any glass but in the end everyone decided that this color arrangement looks far better than what was originally planned.   This project will be lit up soon! 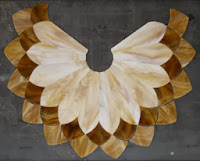 Mama Mia, Terry jokingly said that she's making the alphabet but I'm not sure if she's joking or not.  This Dancing Queen now has her first two letters almost completed and Knowing Me, Knowing You, we all have to agree that these are something special.  With the A and B completed (save for a final soldering) will Terry be working on a C next?  Is that The Name Of the Game?  If she doesn't we may have to send out an SOS. I love these, I Do, I Do, I Do, I Do.

Shelley's Beach Scene is almost a wrap!  She has it all foiled which means that when she comes back in she'll cut the two missing pieces and then add the border (Which she's already picked out).  That means that she'll certainly be soldering this when she returns.  There's not a cloud in the sky in this window in terms of design or workmanship.  Shelley has certainly come a long way.

Last week we learned that Martha only had 3 crosses left to go.  This week she got all of the glass cut, ground, wrapped and tacked together.  There's just some brass channel left to add to these and then a final soldering before Martha can be finished with the last of her crosses and move on to something else.  And I know that she can't wait for that because repetitive projects can get a bit boring repetitive! 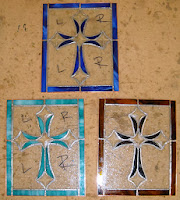 If you recall, we saw that Mary had completed her Beveled Cross window.  Once that was under control she began working on this Bevels Fleur De Lis Window learning how to perfectly center the bevel.  With the background all cut she only needs to add a border to this and then begin soldering it.  Beveled Fleur De Lis Windows really move along quickly! 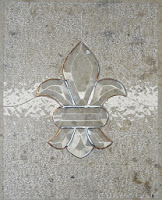 And once Brenda completed her Fleur De Lis Window she began working on this Tulip Window.  She traced out the pattern, numbered it and colored it so she knows what color each piece should be once all her paper pieces are cut out.  The pattern is a SLIGHT variation on a store bought pattern that we made symmetrical and then adjusted for easier cuts. So that wraps things up for this week.  There's a lot in the works though so I'm sure we'll be seeing a lot of wonderful completed window in our next update.  Be sure to come back and check it out.