Our classes run 3 days-- Tuesday, Wednesday and Thursday.  I generally get the bulk of my work that needs to be done between Friday and Monday.  So why is it that I get a good day of work done on Friday and then when I wake up the next day it's Tuesday and I'm cleaning the shop for classes.  I just don't know hat happens to Saturday, Sunday or Monday!  At any rate, I did get the new window designs drawn up for St. Jules so at least this week end was productive.  Now let's see what all our students have been busy working on.

Janet's first project with us has turned out beautiful.  She used one of our  newest patterns (drawn by Russ) and judging by the amount of people who now plan to make it I'd say that it's a hit.  And as a testament to Janet's window I have to say that it wasn't until everyone saw Janet's window while she was working on it that other students decided they wanted to make it as well.  I can't wait to see what Janet decides to do next. 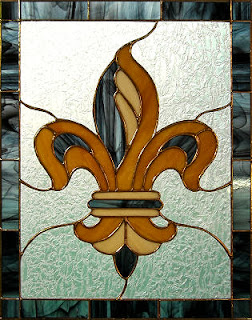 Here is another first project by another new student of ours.   Jeanne's attention to detail helped make her LSU window look every bit as good as work done by any of our long term students.  When you see this window in person it really sparkles nicely.  I suspect that Jeanne's work with us is going to be very prolific as well as precise! 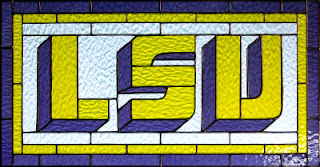 Bonnie got three more of her Candle Holders completed and there would have even been a fourth one as well but we discovered a crack in one of the longest pieces at the very last minute. It's like I always say, You can't make stained glass without breaking some glass.  Bonnie will most likely wrap up her remaining Candle Holders when she comes back in next week. 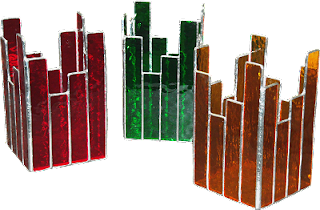 As always, Cindy has made her latest window look easy, even though it wasn't.  Combining three separate designs into one, she's made a window that any LSU fan would love.  And her work is nothing short of exemplary. 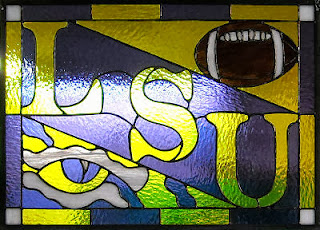 Guess who's back after a three week vacation involving a nice, long, relaxing cruise?  Betty! And she was so determined to complete her Nativity Window that she came in with it all ready to be photographed!  It's good to have Betty back because the place was too somber without her.  ;-) 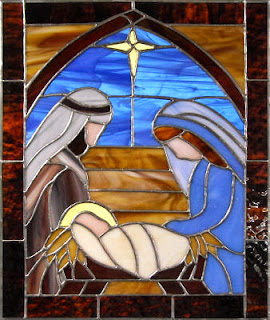 Brenda's latest project came out of the blue.  Her pink Cancer Ribbon Window is her own design but for some reason she seems to be hyper critical of it.  I can't find a single thing wrong with the design of it or the execution and I know it's going to be a well appreciated gift.  I remember when doing a window like this would have scared Brenda to death.  Now she turns out professional windows in the comfort of her home without batting an eye.  She should be very proud of herself. 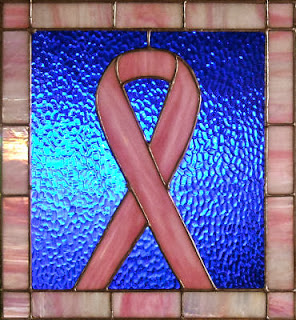 And Terry came into class and went to work soldering.  By the time class was over she had completed her B and A windows but I wasn't able to get a picture of them in their finished state.  All I can do is show you what they look like all soldered and awaiting their final bath.  :-(  As always, Terry's work is nothing but flawless.  Her projects are always the rage in all of the classes and for very good reason. 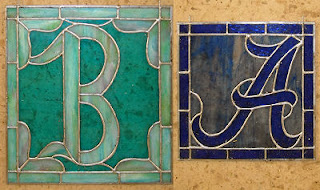 Last week I thought that I'd forgotten to take a picture of the Fleur De Lis window that Becky started but then I found it on the camera when went through this week's photo's.  Since Becky had a meeting  and couldn't make it to class this week I figure we'll reveal what she started last week.  She really liked the ribbon border that Brenda has been using in so many of her windows so Becky has added it to her FDL design.  It's a great pattern and I can't wait to see what colors she decides to use on it. 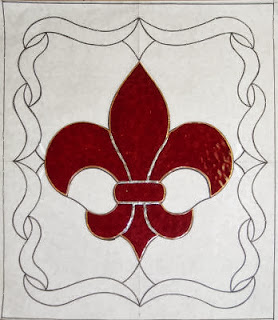 Now we'll return to Betty who not only completed her Nativity Windows but also got her second one all ground and ready to be wrapped and soldered.  She says she loves this window and it's always nice to work on something that you want to do rather than have to do. I heard that we haven't seen the last of this pattern either... 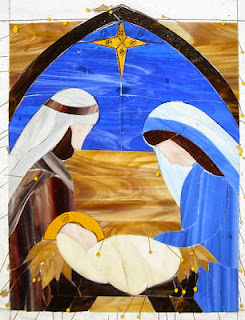 Meanwhile, Linda's in the midst of a remodeling job at home so her time away from class has been stained glass free.  This upsets her, I'm sure, because she always works on her projects at home.  So when she came in this week she just picked up where she left off last week and completed wrapping the pieces on her FDL Window.  Then she tacked it together, added her border and finished soldering the front side.  This is the back of her window and the soldering on that side is well under way.  Now, that's what I call a very productive night. 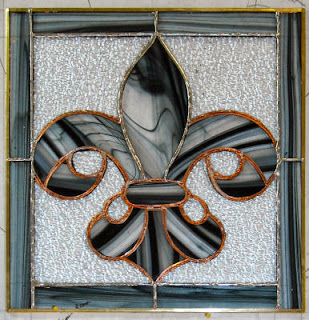 Lynn's Lamp is together!  Yes, everything has been ground and wrapped and tacked into place meaning that the lion's share of the work on this project is now completed.  This lamp was constructed without a mold and actually built inside out to allow the lamp to bend into its round curve.  Once everything was tacked together Lynn cut out the crown for the lamp and has begun wrapping it.  I have to say that Lynn has made this lamp look very easy indeed. 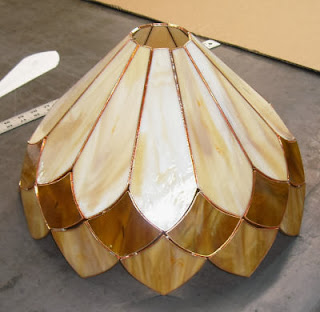 Martha's last three crosses are just awaiting solder now and even that is about halfway done.  She put the brass channel on each of the windows and then got two of the front sides soldered.   I suspect that these will see the light of day next week.  She's worried about how long it's taken to make all these windows but she picked a design with eight tight curves (in each window) that needed to be ground with the 1/8th inch grinding wheel and that takes time.  It's not a simple pattern which is why they are such elegant windows.  Make no mistake, Martha has accomplished a lot.  :-)

Mary's Fleur De Lis Window, Like Linda F's, is just waiting for a little more solder before she can call it finished.  I have to say that Mary has been moving quickly on all of her projects and her soldering has improved greatly.  The more practice you get, the better you become at this art.  I'm going to say that we'll be seeing this completed next week. 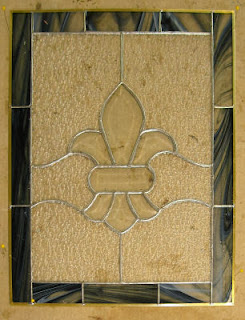 With the front of her Hot Air Balloon Window officially soldered Myrt has moved on to the back side.  We've been spending time in classes going over the soldering process by getting students to slow down and I have to say that Myrt has got it well in hand.  The solder on her front side of this window is flawless.  Slow and steady truly wins the race-- especially when it comes to soldering your windows. 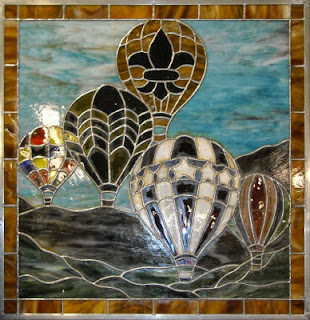 Shelley has her window all tacked together along with her border.  Her missing pieces have been re-cut and soldered into place,  and a zinc channel now surrounds the window to give it some added support.  There are 2 lines that run almost completely across this window and because of them we decided to use zinc channel so the window doesn't accidentally 'fold' in on itself.  I must say that her orange border really makes this window look festive.  Look for her to start soldering this when she returns. 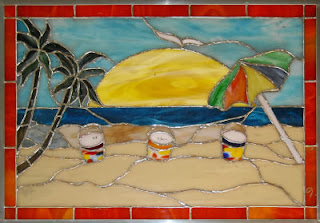 Susan made more great strides with her Abita Window but she managed to pack it all up before I managed to snag a picture this week.  So all I got was an empty table.  I guess this proves I need to pay more attention to my 'Star Pupil' on Wednesday mornings!  (I can't wait to see what kind of a rift that comment is going to make in class next week!) 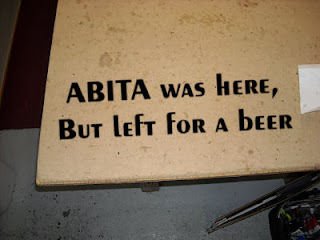 My, oh my, has Cindy certainly been busy.  While she was working on her LSU window she was also working on this TCU Logo design.  It looks like it wasn't hard for her to do because by the time she left class it as all tacked together and ready for solder.  Knowing Cindy this will be completed when she come back next week and all she'll need are some hooks on it. 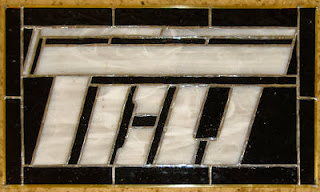 And that about wraps things up here.  Things are starting to slow down a little bit in the shop.  We're just about caught up with everything and won't be starting the next pair of church windows until we get a new delivery of glass (or make a trip to Atlanta to pick it up).  But that will have to wait until the colors are actually picked sometime next week.  A little breathing room is a good thing and I may be able to make something that *I* want to make!