We're late so we'll get right to the projects after I give this simple little tip that came into play twice last week.  A few of our students are unsure of how to handle a grinder that's been filled to the point of it overflowing.  There's no need to let it continue spilling out over the edge and onto the table because all you need to do is place a dry, or well wrung out sponge on the grinding surface.  When it's absorbed as much water as it can just ring it out over your sink and repeat the process until the grinder is no longer overflowing on your table.  Try to keep this in mind because EVERYONE ends up overfilling a grinder at some point in time.  And remember to keep your grinder running while you add water to it so you can easily tell when it's time to stop adding water.  Once the water starts kicking up around the grinding wheel you know it's filled.


So, okay then!  Bonnie's Double Iris Window is complete and already resides in the frame that it was made for.  I thought I was going to have to Photoshop this into a frame but Bonnie had left it here the week before when she brought it in to double check that the panels fit.  Everything lined up perfectly and this is a project that's turned out so nicely that she plans on keeping for herself.

Brenda finished her latest double Beveled Window and as always it's a showcase in elegance.  I've honestly never really been a fan of sandblasted glass but Brenda has been using it for the background of a most of her beveled windows and has opened my eyes up to how nice this glass can be.

Rowena put the finishing touches on her Oval Fleur De Lis Window this week and it looks great.  As with all of Rowena's work it's hard to find fault with this project.  And then she even made another 3D Butterfly Lawn Ornament as well!  Rowena is a lean, mean, stained glass machine! 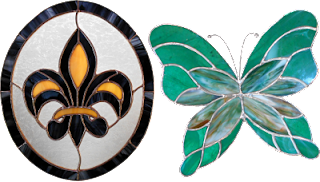 This week we got to see Carol put another magnolia lamp under her belt (figuratively, of course).  It's a perfect match to her last lamp and will sit on a table on the opposite side of her bedroom creating a perfect pair of matching lamps. 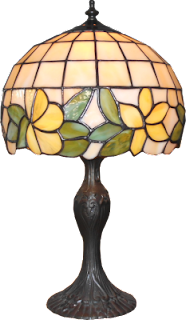 And Natalie completed her Dragonfly Lawn ornament this week making her the first person to use this pattern as a Lawn Ornament (which was a very good idea if I do say so myself).  She did a great job-- so great that I expect to see more of these done in the near future even though my photography skills appear to have been MIA when I took the pictures of this item.  Sorry about that Natalie! 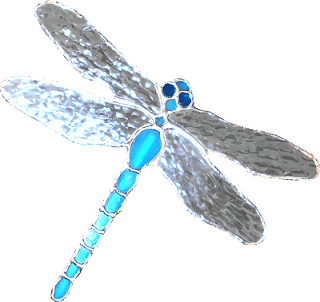 Jeannette completed another 3D Butterfly Lawn Ornament this week which means she's making a butterfly a week.  I think she has these down to a science because she also has a window under construction that you'll see a little later on in this post.  And I must say that Jeannette's soldering around the edges of her Butterfly really impressed me. 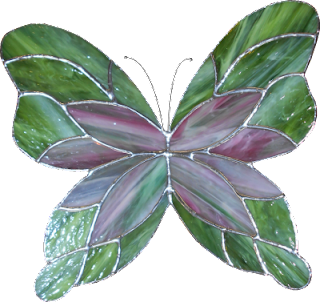 Mary Grace finished her second Pair of Pumpkins Lawn Ornament this week and also began another project as well.  Again, you'll read about that a little further on. 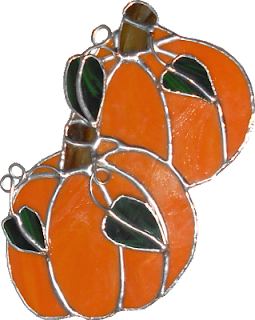 With her Iris Windows finished Bonnie resumed work on her Snow Boarder Window and has come to the realization that small pieces aren't cold at all--they're a beach!  There certainly are some tiny pieces in that snowboard man but wait until she cuts the sky for that tall mountain in the background! 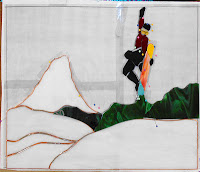 Carol worked on two Ladybug Lawn Ornaments and she's doing it the most effective way possible.  She's ground all of the ladybug parts and then fit it together without leaving any space for the black dots.  Once everything fit perfectly she placed the black glass globs on top of the red glass, traced around them and only then cut and ground the red glass to fit around them.  Doing it this way ensures that there is no slippage during the grinding process and her ladybug fits back together perfectly with her spots perfectly centered.  You can see in the last image that she already has one of them wrapped already.

Susan has been busy as can be working on her LSU Tiger window.  All of the background is fitted together and the yellow portion of the tiger is fitting into place nicely.  The remaining stripes will be added in next and that's when this window will REALLY grab you eye. That background grass looks like a lot of tall glass (to me anyway).

Wow did Charlie get a lot done on his first day working on his second beveled window.  All of his background is cut, ground and tacked!  In fact, the only thing left to do is is add the final glass border and then he can begin soldering it to make a perfect match for his first window.

Gale is making a Fleur De Lis Window of her own and already has her background cut, ground and attached.  Then she got her first border cut and ground and the second one cut out.  With only one border left to go Gale is making quick work of this project. 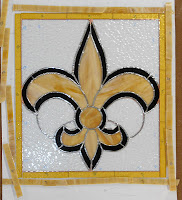 And Sue got the final border attached to her Tiger Claw/LSU Window and has decided to do something novel to this pattern by not adding the corners to the upper right and left of the window.  As you can see it really doesn't need them and help add to the 3D effect of the design.  I like it! 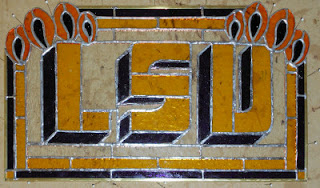 Jeannette is another student who made a lot of headway into her latest project.  Her Pigeon House is almost completely cut out already.  She plans on making a few changes to the roof but those will be  minor and won't take long at all.

Jeanne's made great progress with her version of the Tiger Window which is now almost completely wrapped. There's only the tail left to go and once that's complete she'll be ready for her background.  She's going to possibly add a scenery background and we'll see how that might look when Jeanne returns.

Shelley is almost finished with the wrapping on her Aquatic Window now.  She's going to bring in the glass that she had left over from the sandy bottom of her window and if she has enough of it we may incorporate it into the border in a rather unique and novel way. I'm really hoping she has enough.

Vickie's Fruit Basket Window is now just one border and a few fill-ins away from being a completely cut out window.  Once that last border is attached Vickie will begin the relaxing soldering phase of this project.  All I can say is that I love that border glass. 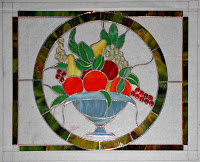 Mary Grace finished her Pumkin Pair and has officially become the first of our students (in Louisiana) to do what used to be a very popular pattern in Pennsylvania.  This Baby Girl already looks great and it isn't even finished yet!  And yes, there's a matching boy that goes along with this if anyone is interested. 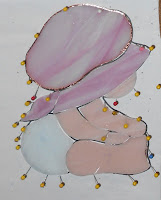 Ann has her three borders attached to her newest Fleur De Lis Window and will be ready to start soldering this when she comes back in.  She still needs to add a zinc channel to the window but that can even be done after she starts soldering it.  The border fit together beautifully and adds so much to this design. 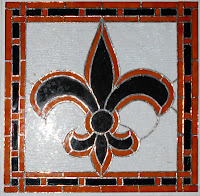 Linda L has her three Pairs Of Pumpkins all ready for backgrounds.  She has one of them all cut and ground and the others are traced out and ready to be cut.  It won't be that much longer before we see the three of these completed. You can see the corner of her second window in the upper left of the picture along with part of the frame that these will reside in. 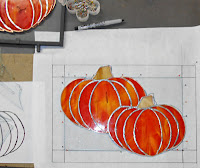 And in the end we have Betty who worked on a new cross window which is almost complete, a Geometric Beveled Window, and two Santa Faces with a LOT of pieces!  About the only thing left to do for her Cross Window is to grind the background to a perfect fit and then cut out the border.  Her choice is background is wonderful as the cross contrasts with it beautifully.  I'm normally opposed to clear borders but there's a time and a place for everything and I do believe that this is the time and place. 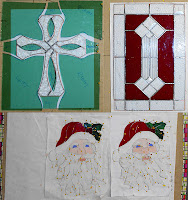 And that's it until we return again with more completed projects and many newly started projects.

Here's the Tuesday night crew along with Russ and myself  sending Cindy a Get Well message while she was in the hospital. 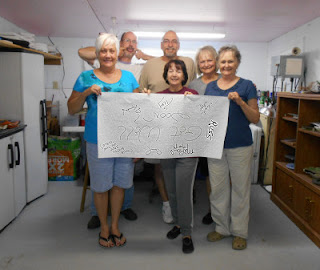