We had another Fusing Workshop recently that was attended by two of our regular Stained Glass Class students, Becky and Martha.  We had a lot of fun and we covered a lot of aspects of using a kiln.  In fact, so much was covered that we're only going to look at a few projects in depth.

Let's start by looking at the six projects that our students made. Here are all of Becky's completed items.  We've even put two castoff chunks of pattern  bar remnants in the kiln which made a pair of interesting pendants. 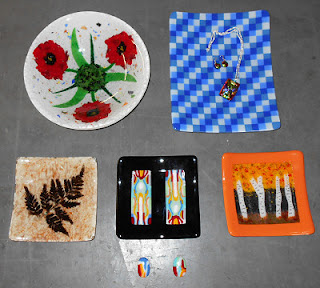 And here is Martha's fusing exhibit.  She was concerned about her checker platter because towards the end things weren't lining up as perfectly as she hoped but as you can see everything fused together wonderfully. 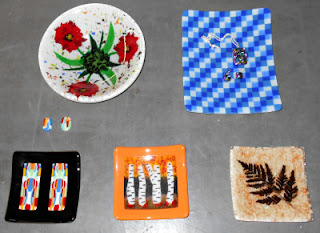 After learning about the tools and the basics of using a kiln Becky and Martha started off by designing some jewelry.  Once everything was cut and set into position the pieces were carefully transferred onto a kiln shelf which Russ carried to the small kiln where they would be fused later that night. 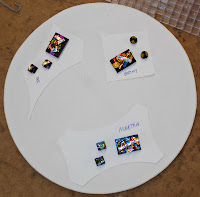 Here's a close look at the jewelry that Martha and Becky made.  It's all created from Dichroic Glass so the colors all shift into different hues and saturations depending on what angle light is hitting them.  Becky was so concerned that she didn't have an eye for jewelry making but everything turned out beautiful and seven she was pleased with the results. 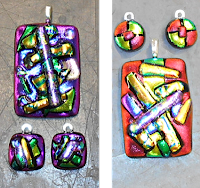 Next up we have the start of a Pattern Bar which admittedly doesn't look like much at this stage of the game.  It's just stacks of overlapping colored glass with empty areas for the glass to slide into and curve around the other colors as they 'melt'.  Actually, when it's completed it looks more like an iPhone cover more than anything you'd make a dish out of.

Here's a look at a Pattern Bar after it is fused.  Those 30+ odd pieces of glass are now one thick chunk of glass with no spaces between them at all.

The pattern bar is then run through a tile saw four times  along the length giving us four cross sections that are arranged to form two separate mirror images.  Those two sections are surrounded by a double layer of black glass and then fused together one last time.  Below you can see that the pattern bars have a matte finish after being cut but once everything is fused they will shine once again. 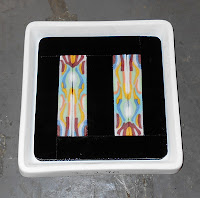 And here is the finished piece along with two small drop offs of the pattern bar which fused into oval pendants which can be used for just about anything. 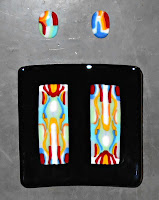 Next up we see one of the Poppy Bowls under construction.  Before we give it a bowl shape a 'blank' must be created which is a flat plate of glass which holds the poppy design.  If we started it off in a bowl shaped mold all the glass would run to the bottom once it started fusing. 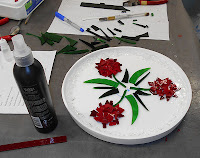 Here the designing phase is completed and everything has been covered in a coarse clear frit which will melt and form a nice smooth clear top surface over the poppies that you can see in the picture above. 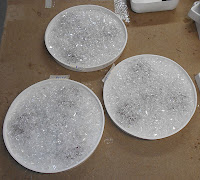 Once everything is fused together the 'blank' enters the kiln one last time resting atop a bowl shaped mold.  Less heat is used in this final pass through the kiln.  There's just enough heat to slump the plate into a bowl shape while not allowing the piece to completely melt which would case the design to run or melt to the bottom of the bowl. 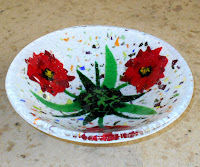 And lastly, although we skipped the making of the Fossil Vitra dish, here's a closeup of one of them.  It's made with an actual leaf but we're going to leave the making of this piece a mystery until we cover our next Fusing Workshop in October. 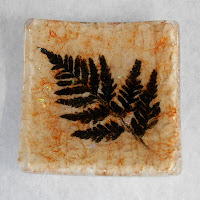 It was a fun weekend, very full, and very rewarding.  The process is completely different from anything our students do in our standard Stained Glass Classes so everyone is always amazed at how things work in the Fusing Class.  In October we'll look at the Fossil Vitra dish and the Checkerboard Platter in more depth.  See you then (if not sooner!)

Posted by Bayou Salé GlassWorks at 9:53 AM