Our tip this week involves knowing when you have to 'chip away' at an inside curve and when you can just take it in one long cut.  For the most part it's relatively simple to know which approach you should take.  In the picture below you can see numerous half ovals drawn out.  The green ones can be taken in one cut while the red ones need to be cut multiple time or even ground into shape.  The general rule of thumb is easy:  If the length is at least two time as long as the depth of the curve you should be safe.  However, if the depth of the curve is equal or deeper than the length then there's trouble ahead.  Look at the red curves and the green ones and pay attention to what the differences are between them.  The red curves need to be cut out a little at a time while the green ones can easily be cut with just one cut.  Once you can differentiate between a deep inside curve and a shallow inside curve you will find that you will spend far less time at the grinder and less time breaking glass. 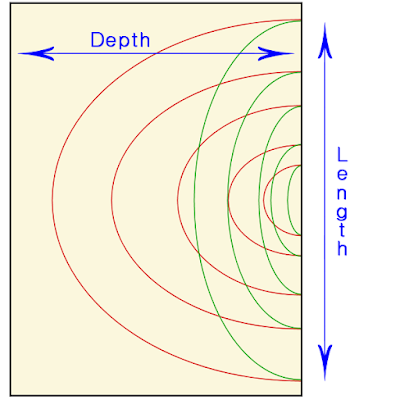 If any of our students don't understand this just ask me in class and I'll gladly cover it with you one on one.

So Wow! Gale completed this wonderful Dove and Flower window completely on her own at home.  I was thoroughly impressed with her work as well as the intricate cuts that she made in this piece that she designed herself.  Look carefully at the background pieces and imagine what it was like for her to cut some of those pieces out.  There was a lot of grinding involved with the small grinding wheel and Gale made everything fit together perfectly.  An amazing job indeed by a student who's really turning heads in all of our classes! 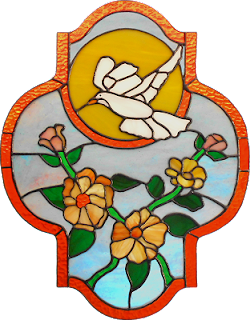 Myrt came in knowing that she was going to be soldering and managed to get not one but both sides of her Butterflies and Flower Window soldered.  By the time she left it was a done deal.  It's a beautiful design and her work on it has been top notch all the way through it.  She's certainly developed a nice eye for detail. 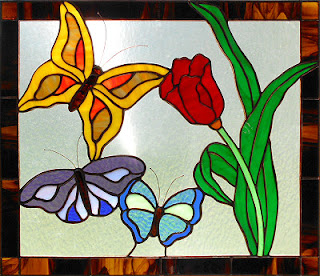 Carol finished her two Ladybugs and decided to put them each on a stake and turn them into Lawn Ornaments.  I had no clue that was where she was going with these but they certainly make a perfect Lawn Ornament.  I have to wonder if we'll see more of these Ladybugs being made now that they're not just a suncatcher anymore. 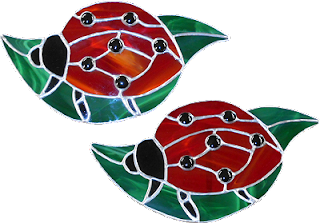 Cindy completed quite a few Cross Suncatchers as well as six Etched Rose Ovals. She took them home to wash and polish them and a few days later I found this picture of the Rose Ovals on her Facebook account.  I have no scruples so I stole the picture and now it's posted here! She's been making a lot of wonderful small items to have on hand when she does a show next month. These ought to sell quickly. 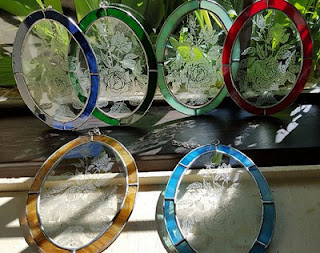 Brenda Completed her latest Tiger De Lis which has been revamped ever so slightly.  Each time that I make something I find little things that I change the next time I make it.  Both Brenda and Terry have followed my lead with each of their patterns whenever they remake them.  A good craftsman isn't afraid to make changes to the patterns they are using if it makes the finished piece better.  Don't you love those green eyes this tiger has! 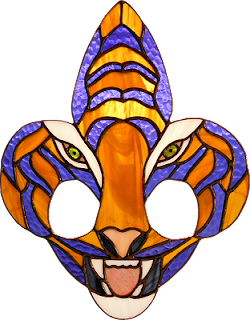 Sue completed her Tiger Claw LSU Window and the end result looks every bit as good as the other version of this window.  She also learned that it's safe to take your time while soldering because although heat will break your glass, it does take an extreme amount of heat and a long time to do that.   The key to a smooth solder line is completely melted lead.  Anything less is sub par (unlike this window!) 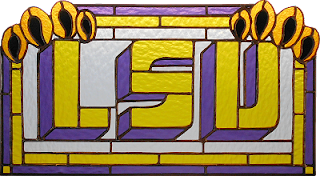 Rowena showed us a picture of her Six Paned Leaf Window all mounted and ready to be hung so I asked her to send the picture to me so I  could share it with out readers.  It's always nice to see the official completed results of our students work in their natural environment. 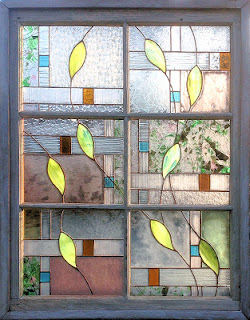 Becky S got the final clear border attached to her Bird Of Paradise/Initial Window and then she added the zinc channel as well (which you can't see because I got shutter happy and took the picture too soon).  Becky will start soldering this when she comes back in and I'm sure that won't take her long at all. 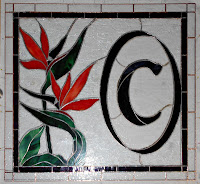 Ann had only to add a zinc channel around her window before she could start soldering and that's exactly what she did.  With the front completed and the back about three quarters of the way done I'm going to assume that she'll have this finished during her next class. 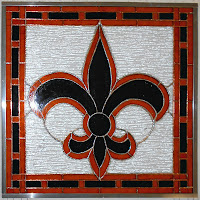 And this week we got to see Bonnie get everything cut out but the borders on her Snowboarder Window.  The nice thing is that she has the colors picked out for the double borders that will surround this window which means that we'll get those cut and attached ASAP when she comes back in. 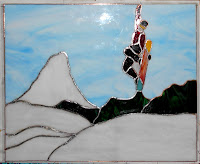 Vickie got her final border cut and after it was attached she worked on the small background fill-in pieces that reside in between the fruit.  Some were very tiny indeed, but filling them in with glass rather than solder will make a big difference in the look of the window when it's complete (which won't be long now). 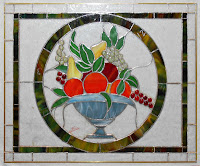 Terry says she'd like to throw the pattern to this horse Window away so she wouldn't have to make it again but then she'd end up having to redraw it sometime down the road.  :-(  It certainly has been a popular window for her and the good thing is that she's able to knock them out pretty quickly as you can see by her progress on this one. 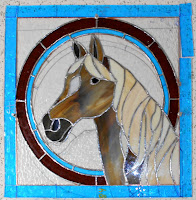 Glale also continued working on her version of a triple bordered Fleur De Lis, but this triple border isn't nearly as complex as the last one that she did.  It still looks great though and that's due to Gales attention to detail. 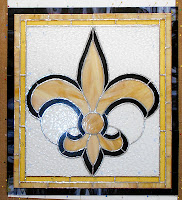 Charlie got the final border on his second Beveled Window cut, ground, wrapped and tacked.  From there he began soldering and I must say that the front side of his window looks great.  Charlie's pretty much got the hang of soldering down now because he handled this without a single problem.

Linda F is just about ready to start soldering her Humming Bird and Flowers Window.  She got the last, biggest piece of her background cut and ground and once it was tacked into place she picked out a border glass that she cut and ground as well.  Soldering this is just a single class away now! 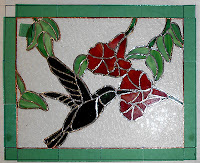 Rowena got the majority of her Address Window finished Her red on White numbers certainly won't be missed when this is hanging in front of her house.  With the center part of the front side all soldered there's only the border left to go.  And guess what?  It's all cut out and ready to be wrapped.

Mary Grace added a background and a border to her Baby Girl Suncatcher which has transformed it from a suncatcher into a window.  It's ready to be tacked and soldered and may very well be completed when Mary Grace returns. 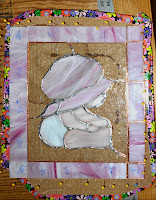 Betty worked on two different projects this week and has discovered that working from the inside outward is far easier than working from the outside in.  Backgrounds are always best cut last (unless you like headaches)!

Martha has her angel wrapped and is all ready to begin soldering it.  There's no doubt in my mind that this will be completed next week and then Martha will move on to the Seafood Window that she's been anxious to make. A new project always gives people incentive to get the old one out of the way! 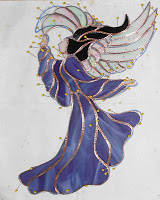 Sue finished one LSU window and immediately began working on another!  This one is far less complicated but then her husband requested a football in the corner which Sue was able to add rather easily.  This LSU will be a piece of cake for her.

Linda L got the border cut for one of her three Pumpkin Ornaments and then began cutting out the second.  She plans to come in with all of her borders cut and will hopefully be ready to begin soldering.

And although I have no pictures to prove it you'll just have to take my word that Paula, who was only in for a short time this week,  got her glass picked out for the numerous Dragonfly suncatchers she will be working on.  She's also about to start a medium sized Nativity Window as well which should keep her pretty busy.   I promise that we'll see picture of at least the Dragonflies next week.

That about wraps things up here.  Make sure to check back with us again!

Posted by Bayou Salé GlassWorks at 1:13 AM