Ok, let's try this one more time.  I had this more than halfway completed when a power flicker hit and caused me to lose everything.  Save, save, save!  Let's just jump on in here.

Ann's Triple Bordered Fleur De Lis Window is completed and it's really beautiful.  The black glass makes the amber look like a beautiful gold and the heavily textured clear glass brings it all together. The border was a bit complex but as Ann said, she loves it, and so do I. 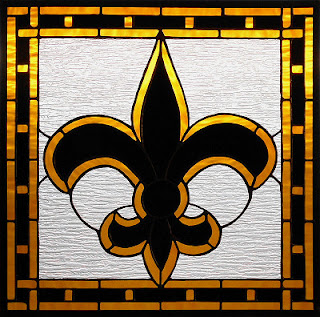 Martha put the finishing touches on her second Angel suncatcher, this one in slightly darker hues from the first that she did.  Now that it's completed she plans on starting a big ol' Seafood Window! 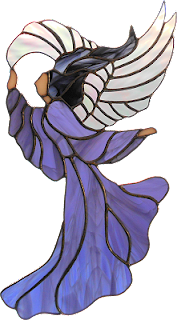 Mary Grace completed her Baby Girl Window and matching the bonnet to the border was the perfect thing to do.  It made the border unobtrusive and kept the color scheme feminine. 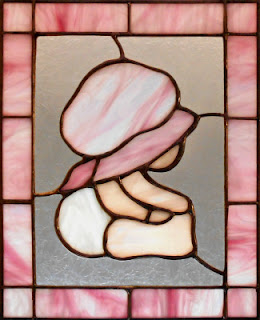 Cindy finished another Cross Suncatcher along with two new UL/Pepper Suncatchers.  I emailed her the UL pattern on Wednesday afternoon and she wasted no time in getting two of them completed.  A labor of love for sure! 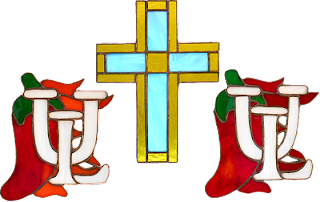 Rowena's got her own number down with this House Number window.  She flew through this project so quickly she even managed to impress herself!   I hope it gets installed as quickly as she made it because this is something all her neighbors should see and compliment her on.

Natalie came in and immediately set upon cutting out this Frog Lawn Ornament.  A few minutes later she was grinding it and then she took to wrapping it, soldering it, and even finishing it!  It's always nice to see someone come in with nothing started and walk out the door with a completed project. 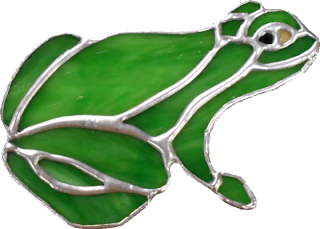 And Paula made a Dragonfly Suncatcher which even though it looks simple enough it really isn't.  When you see it next to something for scale you realize that save for the wings those are some tiny little pieces.  The round eyes are only three eighths of an inch round.  But Paula's end results are perfection. 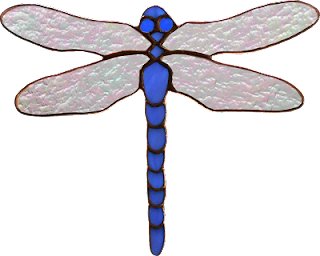 This week also saw Rowena make another Butterfly Lawn Ornament.  If she has all of them in her yard she isn't going to be able to find room for her Street Number Window!   She says they make great gifts and Jeannette agrees which is why they are making so many of these. 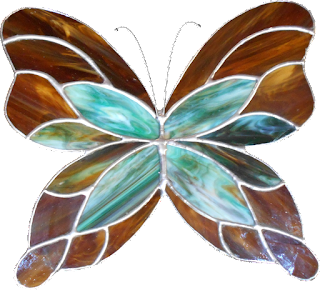 A horse is a horse (of course, of course), unless Terry is making it for you.   This one, like all her others varies from the original pattern as Terry continually makes little changes to make it look better each time she makes it. 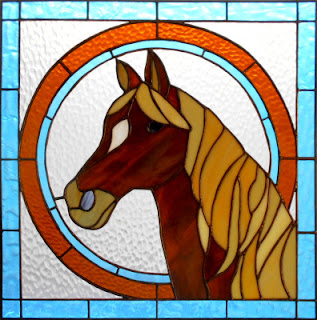 Susan managed to get her Tiger feet ground into her background glass and then went a step further and added a nose to this Tiger.  I personally think it was skipped due to a missed line while she was tracing it out because it's a night and day difference when this Tiger has a nose.  I think we'll be seeing stripes when Susan returns to class.

Becky S's  combination Bird Of Paradise/'C' Window is very nearly complete now.  The front side is all soldered and the back side looks like it's about a good third of the way finished so Becky is nearing the end with this window. 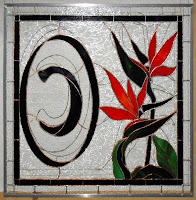 Here's the first look at all three pairs of Pumpkins that Linda L is making.  The borders have been attached and the channels have all been fitted which means that the only thing that Linda has left to do is to solder these and then add the wire work and leaves. 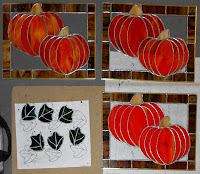 Susan has her LSU and its background all ground and has taken it home to wrap.  She made the football in the lower right corner a lot more symmetrical by learning a simple but very effective trick.  All this needs now are a pair of borders before she can solder it and wrap this project up.

Jeannette's Pigeon House Window is all ground and ready to be wrapped.  You can't see the details in the tallest building yet but you will when you see everything wrapped.  And just wait until you see how nicely the railings are going to work out along the bottom red portion of this window. 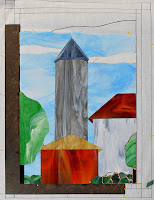 Becky B is back and she's started this Horseshoe Cross design.  I'm unsure if she plans on making this a window or a suncatcher because lately when I've assumed that something will be a suncatcher I've been wrong.  I won't assume from here on out!  Either way it will be beautiful and we already have students asking when the pattern will be available. 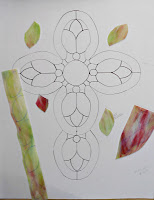 Although you can't see it there IS a piece of clear glass behind the Fleur De Lis that Carol got all cut, ground, and wrapped together this week.  She'll be putting this FDL into a circular window and will most likely have the borders on it when she comes back in. 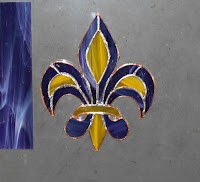 Here's a look at Gale's latest Fleur De Lis Window with its three borders attached.  She has the front side completely soldered and a lot of the second side done as well.  Gale has picked up all the basics of making stained glass rather quickly and has even become an expert solderer already.  This will be out the door before you know it. 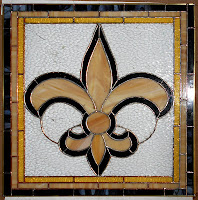 Terry began work on this Humming Bid and Fuschia Window that she drew up herself.  I love her choice of colors in this.  I tend to go for high contrast colors but the pink that Terry picked for her flowers is softer than anything I would have used and that actually makes the window look better to me.  I always make a mental note of great color combinations and have already filed this away for possible future use.

Vickie has the front of her Fruit Basket Window all soldered as well as a good portion of the second side.  I really want her to complete this next week because I'm dying to see what this will look like with some light behind it.  Something tells me that I'll get to see that soon. 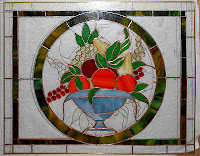 Shelley continued wrapping her Aquatic Scene Window and only has one fish left to go.  She's taken those pieces home with her to wrap during the week which means that she'll be tacking this together and adding a border when she returns.

Bonnie has all of the glass cut for her Snowboarder Window and the inner yellow/orange border works perfectly.  There's not a lot to solder on this project so I'm expecting to see Bonnie start something new very soon. 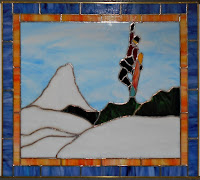 Ann finished coloring her Triple Bordered Fleur De Lis and immediately began working on this Orange and Red Cross Suncatcher.  It's all cut and ready to be ground which I'm sure Ann will make short work of-- especially since she's made these before and is familiar with the pattern, 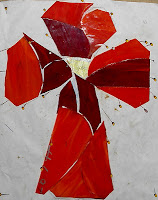 Brenda got her new LSU/Fleur De Lis Window all traced out and will be ready to start cutting glass for it shortly.  She's also working on another window at home so I guess you can say that Brenda is burning the candle at both ends! 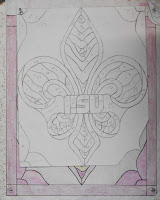 This week we got to meet McKaila who is doing her Student Project on Stained Glass Window making.  Terry has been showing her the ropes and McKaila has had no problems at all making her first Fleur De Lis Window.  I was very impressed with what I saw her doing this week and now I'm worried that Terry will start teaching my classes soon!  But honestly, McKaila is doing wonderful work as you can see for yourself. 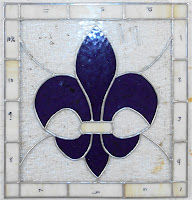 One of our students from a few years back sent us this picture of a Louisiana Tigers Window that she drew up and is working on.  It's plain to see that Denise hasn't forgotten anything about how to make stained glass since she left because this looks beautiful!  Hopefully she'll send us another picture when it's completed. 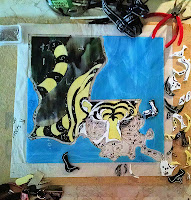 And that will wrap things up for this edition of our weekly update.  Hopefully I won't be so rushed next week to make up unsaved work.