Having Too Much Exposed

We're jumping straight in here because I never worked out a tip for this week.  Susan R  has completed her Mini-Trellis which features 3D flowers, a 3D Butterfly and a Bee mounted on top of a background of assorted leaves.   It looks spectacular and I've also included a side view so you can see just what I mean about the flowers being three dimensional. 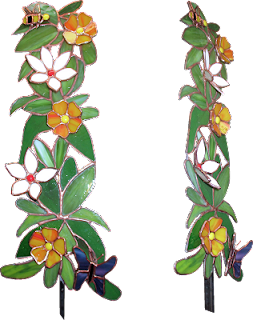 Angie's Praying Hands Window was finished and the bevels that make up those hands really sparkle and shine.   Set into a powder Blue Sky these Prayer Hands show what true devotion is all about. 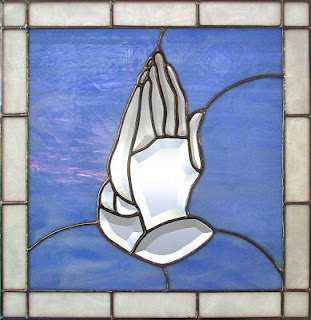 Mary Grace's latest Hoop project is a Flower that extends beyond the hoop for an even more striking  effect.  More than a few people have been confused about how you would attach something that is larger than the hoop but as you can see it's a design idea that works wonderfully. 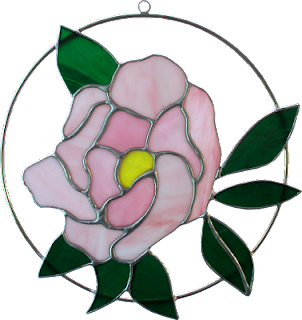 Lara  made this fancy suncatcher featuring an iridescent triangular centerpiece.   The beauty in this lies within its simplicity and Lara's use of clear textured glasses. 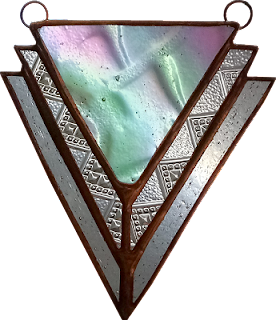 Annette loved the flower suncatcher that Melissa made last week so she  took the pattern home with her in hopes of making a few of them on her own.   She came in with all her pieces ground and wrapped, and by the time she left class she had three of thee popular Flowers finished in three different colors.  Beautiful. 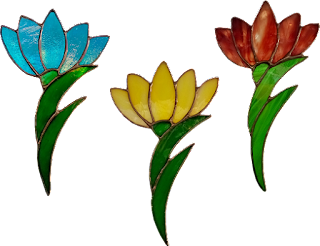 Cindy created another  red, white, and blue Bicycle Wheel Spinner and only has one more to go before she ends her Spinner series.  Practice makes perfect and as you can see Cindy has had a lot of practice making these. 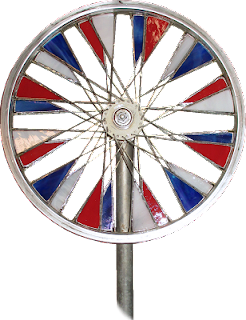 Kerry began working on a Butterfly Window which will feature a beveled border.   To achieve that we had to alter the pattern just a bit by cutting down the height and extending the width of the pattern to accommodate the bevels that he plans to use.   Never forget that a beveled border can't just be added to any window--  you have to plan out the size in advance just like Kerry has done here. 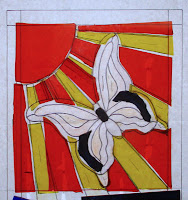 Lara also managed to worked on her Flower Pot Window this week.  She had ground everything while at home and spent most of her night wrapping her pieces and then tacking them all together.  With just a border or two to go this will easily be completed before you know it.

Shawn got an incredible amount of work done on her Scuba Diver Octagon Window as it is now completely ground.  She's altering the head apparatus of the diver from what was drawn on the pattern and the diver still needs some fins on his feet but we're going to tend to those pieces AFTER this has been tacked together so we can work with a window whose pieces won't be shifting around. 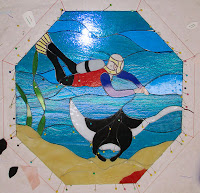 Judy  had cut out most of her large Angel Suncatcher last week so when she came back in she only had a few pieces of the wings left to cut out.   Once that was done she began grinding her Angel and by the end of class she had it all fitting together perfectly.  That's impressive work done impressively quickly.  It won't be long before Judy will have to decide what she's making next. 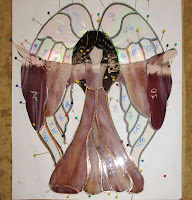 Mary Grace has another Hoop Project well underway.  All that's left to be done is to grind the eyes and beaks of her two Cardinals after which she'll be able to  wrap and tack them together.  This is another pattern that extends beyond the perimeter of the hoop as the tail feathers of these birds will hang below the hoop as pictured below. 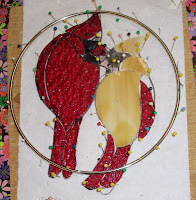 Our newest student, Kate, has decided to make a Dragonfly Panel.   She traced out her pattern, cut out the paper pattern pieces and then began cutting out the actual glass pieces.  She's undecided as to whether the body of the Dragonfly will be red or orange so she cut the body out in each color and will decide which she likes better once the blue water has been cut out.  Green is also another possible color selection for the body...

Roxane got the second scene in her three section Nativity Window all tacked together which means that the third section will be started when she next returns to class.  This is going to be a large window once it all comes together. 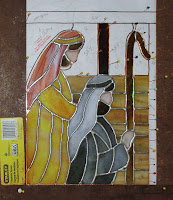 Mary's Redfish got it's lure cut out and then she was able to cut, grind, and almost completely wrap her border pieces as well.  She's used a nice heavily textured clear that's really going to sparkle when it gets some light behind it.  Actually, it already sparkles just resting there on the pattern! 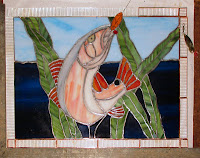 Linda F is making an oversized Flower Hoop of her own and now that she's seen Mary Grace's rendition of it perhaps it will all make more sense to her as to how it will look with the leaves 'poking' out of the hoop. 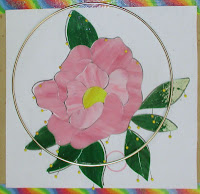 Susan D's Summer window has moved along QUICKLY!  She's only got a few more pieces left to wrap and then she can begin soldering it.  I love how she  took her time and carefully cut the rays of the sun into the blue sky without running lines out from each point.  That's some serious determination there.

Having cut out all of her clear textured background glass Tracey's Hummingbird Window is now ready to be ground.   In fact, if you look closely you can see that she's already got a start on that process in the bottom right hand corner.   You can never say that Tracey doesn't work quickly and efficiently. 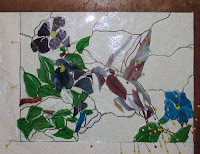 Linda F did manage to complete her Louisville Cardinals window but it still needs to be colored.  Since she's doing this in black patina she has to let the patina set for about 45 minutes after she applies it and she just didn't have enough time left to let it sit that long this week.  Rest assured that this will be colored and hanging up when we see it again. 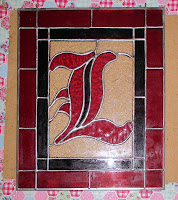 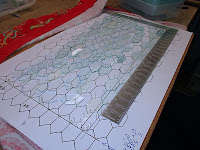 This was what Sheri's Chakra Yoga Window looked like when she took it home to wrap.  Sadly though, tragedy has struck and Sheri actually fell while transporting it.  Luckily Sheri is fine save for a bruised tailbone however  I don't know exactly how much  broke.  All she said was that  she needs more of the blue glass and more of the textured glass that semicircles the man.   Please stay tuned as more details will be provided as information comes in. 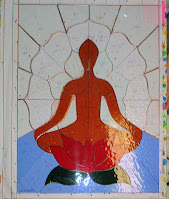 Martha's Wedding Box is taking shape quickly now that she has the lid section all tacked together and ready for solder.   With a little bit of luck this will be completed when she comes back in-- if not it will be very, VERY close to completion.  [Now that I know that we will be having a small class Tuesday I believe that I can safely say that this WILL be completed.] 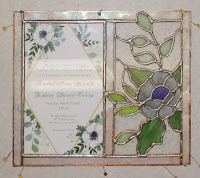 Cindy's already got her newest Bicycle Spinner cut out so all she needs to do is to wrap those pieces in copper foil which she likes to do while at home.   With extra class time on her hands she's started her next project-- a Franklin Streetlight Window. Judging from her phone call to me she may very well have this mostly cut out because she told me that she's wrapping pieces in copper foil already. 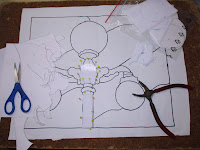 And to wrap this post all up we'll take a  look at Cheryl's Mr. Bingle Window which has been completely soldered now.   She has to fix a few run-throughs on the front side but other than that this window is finished.   This will be washed and looking festive when Cheryl comes back into class two weeks from now. 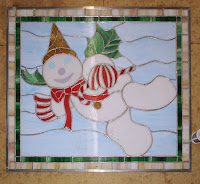 So there it is, everything that happened in our last set of classes.