When making suncatchers a lot of students have a tough time blending their lead lines into the lead bead that surrounds the outer edge of the suncatcher.  In most cases people drag lead off the edge of the glass creating a 'waterfall'  and other times they stop short and don't connect the lead line to the edge bead.  The picture below is what we're actually looking to achieve.  You want a nice smooth joining of the lead line to the edge perimeter of the piece. 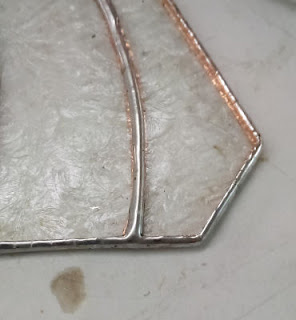 This is actually not hard to acheive.  All you need to do is to rest your iron on the lead line about a quarter of an inch from the edge of the glass and wait.  Watch and you'll see melting lead radiate outwards from the tip of the iron to the edge of the glass and when it connects GENTLY lift the tip off of the glass leaving behind a perfectly smooth joining of the top and the edge lead beads.  The key word here is GENTLY and I can't stress that enough.  Sudden moves will always leave irregularities in your lead.  If you lift the tip of your iron from the lead slowly you'll get a perfect line every time. 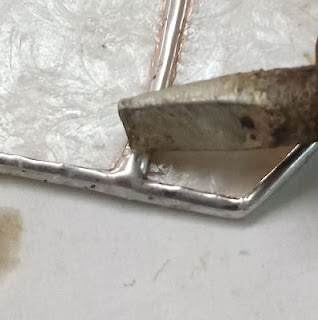 Linda's Watering Can Window is finished and the careful cutting of her sky really makes this window flow beautifully.  Alas, the only picture I got that didn't turn out blurry was the one that had the flash on so the glare is taking away from the continuous flow of her sky in this particular picture but trust me, it's as natural and realistic as a stained glass sky can get. 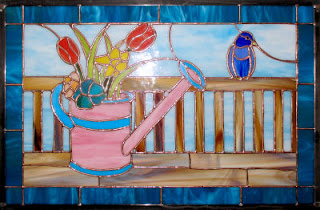 Although it may not be your cup of tea (so to speak) Annette's Falcons Window is certainly going to turn heads.   She did a great job on this window every step of the way which leaves her with a project that can't help but to become a show stopper. 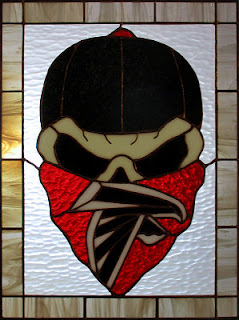 Kerry's Bobwhite Window was completed and I have to give credit where credit is due-  Kerry has really stepped up his game when it comes to soldering.  That said, this is a fantastic job all around no matter how you look at it. 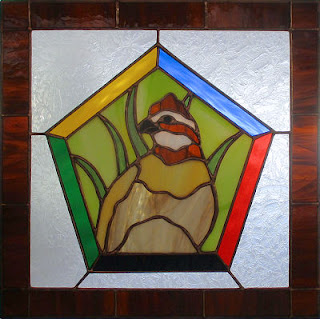 This is the first of two completed projects that Lisa made.   It started out as a single Cardinal in a hoop but then turned into a flower and a cardinal in a hoop.  Then, at the last minute, Lisa decided to add a prism hanging from the bottom of her Hoop design and it would appear that the third change is the charm! 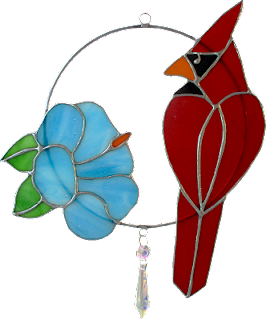 After that Lisa went off and completed her latest Lantern Insert Panels featuring an almost 'woven' design.   Here it is all lit up and looking mighty fine. 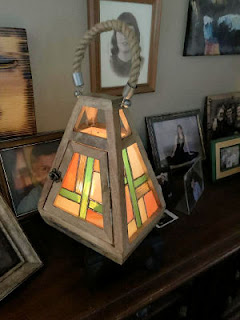 Melissa called me just before class started and said that although she was coming to class she had forgotten to put her pattern in her car for the Butterfly that she was working on last week.  Rather than wasting a lot of class time by going home to retrieve her pattern pieces she decided to make something quickly in one class as a present.  She loved this flower design and by the end of the night she had crafted it perfectly. 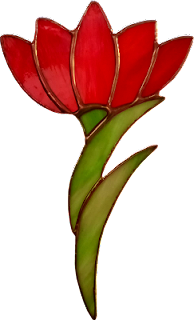 Sheri was certainly busy while in class because she completed her Cross/Heart/Rose Panel.  Measuring slightly larger than a piece of paper, this design always sells well at shows.   Here's hoping Sheri has luck with hers! 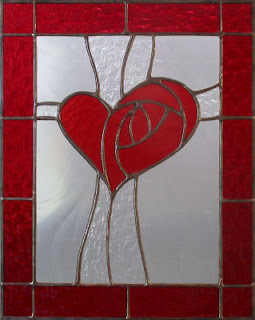 Cindy's latest Bicycle Wheel walked out the door as two more blank wheels walked in.   Like I said last week, she's on a roll with these things! 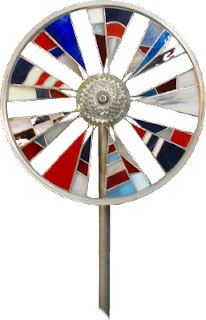 Betty walked out the door with three more Crosses under her belt (so to speak) and they all look fantastic.  As Betty often says,  "You can never have too many suncatchers in the house because you never know when you'll need a gift!" 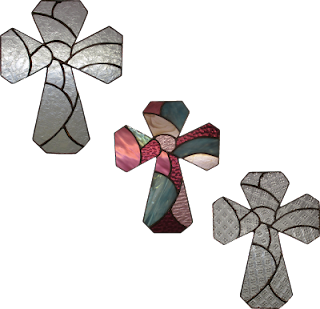 And for our last completed project we look at a butterfly which means that we have a new student!   Kate sure has a sense of style because I honestly don't believe anyone has ever made an all clear butterfly before.   She even colored the lead with black patina to really give the lead some contrast. This was made with the greatest of ease and I can't wait to see what she decides to make as her first window with us. 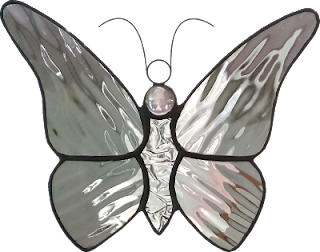 Linda L is making a Flower Window utilizing Depression Plates as the flowers themselves.  We saw the pattern in our last post but this week you can easily see what this is going to look like since everything but the background has been cut out and laid in place.

Speaking of having everything but the background cut out-- that's exactly where Tracey stands with her latest Hummingbird Window.  She has her pattern all traced out onto a beautiful piece of clear onami glass which is actually resting on top of the flowers and bird in the photo below.  Look closely and you'll see the blue outlines.   Next week they'll all be cut out and Tracey will begin grinding. 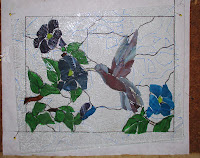 I always frown when I take white on white pictures but Bee's Dove is currently white glass on white paper so it is what it is.  That's not to say that this won't be stunning when it's completed-- of that I have no doubt.  It's just going to be hard to see just what Bee accomplishes each week until this is finished and hanging up. 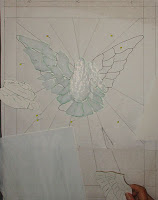 Judy wanted to do something a little smaller than a window so she's making this large Angel suncatcher. She's only been working on it for one class and she's already got most of it cut out which means that she'll surely begin grinding this Angel when she returns. 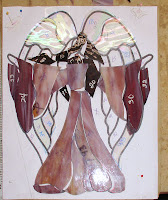 Mary Grace has begun working on another Hoop Design, this one being a pair of Cardinals.   I may be able to talk her into adding a few simple leaves to 'round this out' when it's finished.  We'll see what happens when she comes back in.  It will be easy and it will add so much to the finished project. 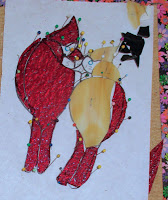 Linda F not only completed her Watering Can Window-- she also got a lot of work done on her Louisville Cardinals Panel as well.  This is all cut out and she's now well into the grinding portion of this piece. 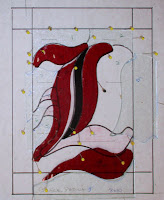 Shelley's got her Flamingo Window all ground save for the beak of the bird so she's taken this home in hopes of having it all wrapped and ready for beak work when she comes back in.   The beak will be easy enough so we should get to see a border get cut for this as well.  This will be completed before you know it.

Susan R finished the soldering on three of her six 3D flowers which means that this Flower Sculpture is almost finished now.  Once the remaining flowers have been assembled she'll color them and then tack them onto the leaf trellis section after which she'll be able to call this a completed project.

With the side panel all  cut out for her Wedding Invitation Box Martha is ready to to grind her background glass, tack this together and then get a border cut out for it.   I have to say that the hard part of this project is well behind her now. 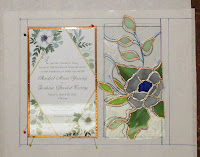 Mary finished wrapping almost all of the pieces for her Red Fish Window and now that we can clearly see what things look like I think that we will be cutting the lure into both the window AND the border.  We'll show you what that looks like when we post our next blog update. 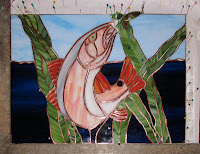 Here's the back side of Cheryl's Mr. Bingle Window about half way soldered.  When we flipped it over after she completed soldering the front of her window I could tell that all of the Strong Line we added throughout the window had helped to sturdy things up a bit.   That's not to say that she won't have to be careful with this, but it will in fact be stronger than most windows this size (almost 4 foot wide).

It looks like Cindy has at least two more full sized Bicycle Wheels to stud with glass.   She's been accomplishing one or more a week so these shouldn't take her long at all. 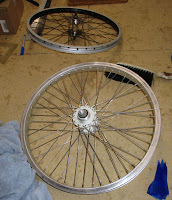 And last but not least we take a look at what Lara accomplished while at home throughout the week.  Not bad at all.  This is definitely coming together and looking great! 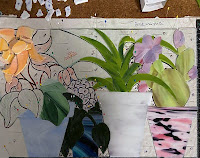 And there you have it- all the news that's fit to post.
Paul
Bayou Salé GlassWorks