The sponge that rests behind your grinding wheel is an integral part of your grinder and should never be forgotten about or taken for granted.   People don't realize that it can easily become plugged with ground glass which then prevents water from reaching the wheel.   I always pour some water directly over the sponge whenever I add water to my grinder to help clean it but even doing this isn't enough for truly good maintenance.  Actually, you should remove the sponge and wash it out regularly.  If you find it to be solid rather than 'spongy' simply hold it under running water while squeezing it until all of the ground glass trapped within it has been removed.  Doing this will prevent your glass from chipping and make your grinder head last longer.

Now take a gander at this!  Bee's Cardinal Window has officially been completed and you can't tell me that all of the work she put into this wasn't worth it.  The design itself is original and outstanding--those wings fanning outward just give a beautiful grace and balance to this window.  I can't wait to see what Bee comes up with next! 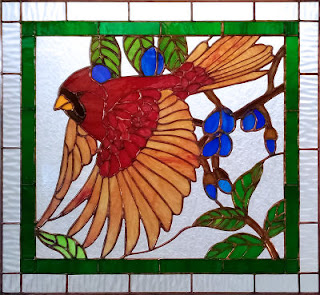 Once washed and hanging up with some light behind them, these Texas Boots sure do shine.  The red, white, and blues centered into amber and brown hues really draw attention to the patriotic nature of this window.   Judy did wonderful work on these boots and that's a fact. 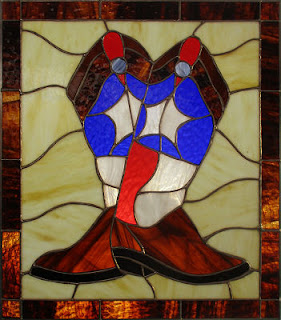 Ann made a few tweaks on her Angel Hand Mirror pattern and ended up with this design.  Although it's extremely similar to the last one she made this one features a bit more mirror therefor giving it a better view.   You can't go wrong when you start with a great idea. 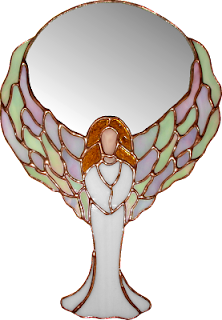 Lisa's newest Lantern features a musical motif with a Treble Clef inscribed door panel and piano keys that wrap around the remaining 3 sides of the lantern   Those piano keys were a challenge because of how close black keys resided to the lines separating the white keys but Lisa was determined and her end result is fantastic. 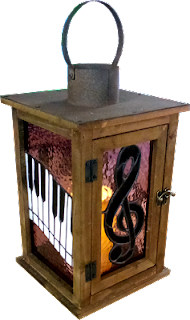 Here are Cindy's newest Bicycle Wheels but these feature a bit of a twist-- they are made from a child's bike!  These frames are only about a foot wide so they went together VERY quickly. 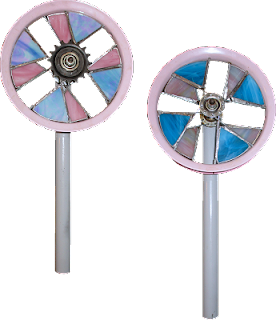 Betty got all four of her Humming Birds completed and learned how to make eyes that are cut into glass rather that tacking beads on top of the glass.   Although it seems tricky it really isn't as long as you keep your half circles lined up every step of the way.  I think that these four birds prove that you can't screw up your color choices when making this pattern. 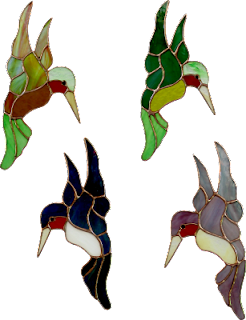 Linda's wrapped up the work on her last two Butterfly Hoop designs, one with blue/purple wings and the other with wings made from a burgundy swirl.  With these under her belt she's leaving behind hoops and moving on to plates as you'll see later. 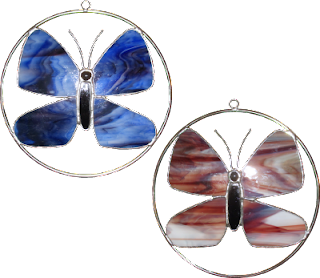 With a fifth Cabinet Insert installed MiMi only has one left to go for this section of her entertainment room.  She's already well underway on that sixth panel of glass and I know that MiMi is very much looking forward to seeing this entire section of her room completed. 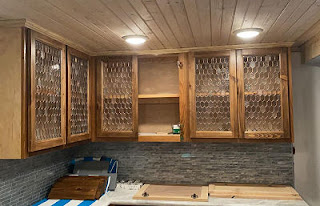 Angie's Praying Hands Window just needs to be soldered and then it will be out the door.   She cut her blue background out of one piece of glass cut to the size that she needed the background to be.   She then traced that praying hands in the center of that glass and cut it out starting from the bottom and running to the upper right side of the glass.  After that the rest of the cuts were in God's hands so to speak and in the end the grain of the 'sky' was perfectly aligned throughout the window. 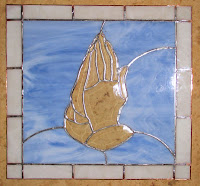 Martha has begun work on a Wedding Box complete with an intricate side panel that matches the invitation.  These make wonderful wedding gifts and this one is set to be spectacular. Talk about a personalized gift! 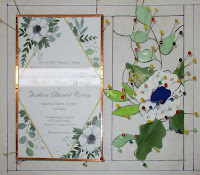 Jan found this pattern of a Pelican and loved the look and the size of it.  This week we see that she's got it all cut out and that she's begun grinding everything as well.  I like the way she offset the sky and the water with colors that match yet are not too similar.   Look close enough and you can actually see the sky reflected in the water. 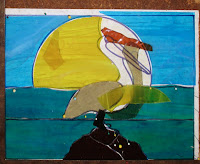 Lisa started off thinking that she'd put this Cardinal into a hoop but then she felt it looked a little empty.   What to do?  Add a flower!  This is going to make a perfect pair and I love the fact that Lisa isn't afraid to think outside the hoop. 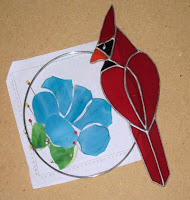 After getting her background tacked into place Annette found herself working on her border pieces.  I have to say that it didn't take long before she was ready to start soldering her Falcon's Skull Window.  With the front side started there's a chance that this will be finished during her next class. 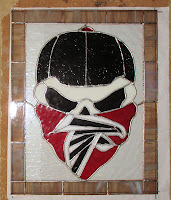 With all of the glass officially cut out for her Flower Pot Window, Lara has begun grinding.  She's on a deadline to get this completed but she has absolutely nothing to worry about because she has plenty of time to finish this and get pretty far along into her next project before her time runs out.  Let's face it, this already looks like it's been ground so how much grinding will this actually need to get to the next step in its creation.

Mr. Bingle now has his double border attached along with plenty of StrongLine between MANY of the pieces in this window.  Cheryl then took her time soldering and got most of the front side of this huge window completed.   We'll flip this over when she returns to do the back and I think it's safe to assume that this will be finished in about two more weeks. 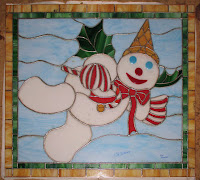 Mary Grace got her flower all ground and tacked together for her newest Hoop Project.   With just a little soldering to go this will easily be finished when she comes back in and then she'll be able to work on her Cardinal Hoop pattern.  She sure likes those hoops! 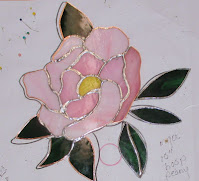 Shawn's Diver and Manta Ray Window is coming together better than ever as she carefully grinds each piece for perfect fits.  She's working from the ground upward on this and I think she'll easily get to the diver himself by the time we next see this window. 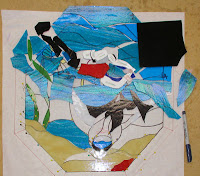 With the 3rd panel of her Nativity Scene practically completed, Roxane will come back in, tack this together and then lay the three panels out to see what she wants to use for the sky and the wood beams of the manger.  It won't be long before all three are connected into one big Nativity Scene.. 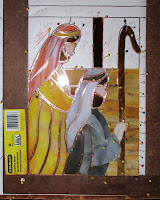 Sheri had another productive class as she was able to finish all of the cutting for her Chakra Yoga Window and then get a large portion of grinding done as well.  I won't be long before Sheri is ready to wrap this in foil.  She's a little concerned that the skin is too dark, but once this is off of the table and it gets some light behind it I can guarantee that the 'skin' will lighten up. 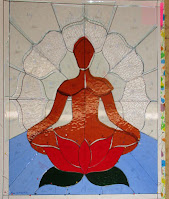 Linda F had a beautiful blue/pink glass picked out for her border that perfectly matched the watering can but after the border was cut out she decided that it drew too much attention outward rather than inward to the main theme of the window.   I applaud her for deciding to change it even though she had the pink/blue glass already cut and ground.  If you don't like something you need to change it because once it's done it's done.  And yes, I love this border color that she picked as a replacement.

Tracey's Hummingbird Scene is well underway with just a few feathers and the background glass left to cut for this.   This design has the look of a traditional stained glass window and I think it's going to be a huge hit with everyone who sees it. 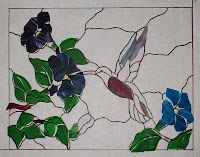 Mary got all of her glass ground for her Redfish Window and just as promised, it looks just like a Redfish!   We still have to work out the section in front of the mouth because we need to cut a lure into that area.  I have no doubt that will work out easily enough and then this window will look even better than it does now. 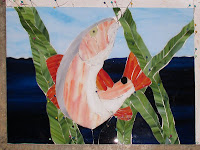 Susan D has everything cut out for her Summer Window and check out the extraordinary use of glass that she picked for the pail in the sand near the left hand side.  It's one piece of glass but it matches the beach ball on the right side of the window that was cut from 6 different pieces of glass.  Perfection!

Sometimes a line drawing (a pattern) just doesn't convey just how wonderful the pattern actually is.  I agonized about the iris in this drawing but Melissa's choice of glass already makes it look stunning even in its current un-ground state. And when she gets to the colorful butterfly below it, well, look out! 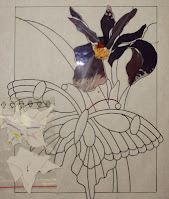 Speaking of Irises, Barbara has a good portion of her Yellow Louisiana Iris Panel ground already.  As I always say, the second one always moves along much quicker. 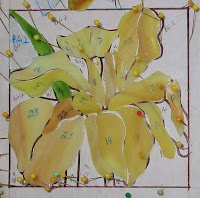 Kerry's latest Pentagon Window features a Bobwhite rather than an eagle.   Aside from the species of bird the rest of the window will be very similar to his last one and as you can see he's well underway to finishing this already. 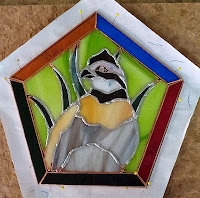 Cindy's latest Bicycle wheel is actually completely soldered now and only needs a bit of touching up before it spins its way out the door.  We'll see exactly what this looks like next week.

Lastly we look at the pattern that Linda L will be working on when she returns.   The round sections will be made from five assorted plates  that will be soldered into the window.  There's a trick to this and we'll discuss that as Linda gets further along into this project.

And there you have it.  It was a busy week and it looks like that busy schedule won't be changing any time soon!