Tell Her Ghost Came By-- It's Taken Care Of

Our tip this week has to do with blue skies and why we like to cut them from one large continuous piece of glass.  Below is  part of a sky that Jeannette made way back in 2014.  Note how the grain and flow of the sky matches and connects even though the glass has been cut up into numerous pieces.  This makes it appear as though the boat is in front of an unbroken sky even though it actually has been cut  multiple times. 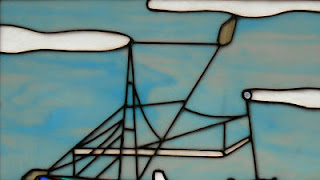 Now here's the same scene with one exception:  this was put together by cutting pattern pieces for each piece of sky, laying them out onto a sheet of glass and cutting each piece independent from each other without caring about how it all lines up.  Note how pieces of dark blue are surrounded by lighter blue sections of sky.  Nothing joins together and the sky no longer has a peaceful flow to it.  This is an important part of making professional looking stained glass.  Skies should flow together with the grain connecting from piece to piece.   Positioning sky pattern pieces on glass randomly will always leave you with a less than desirable looking window. 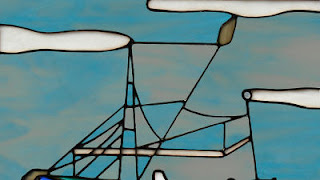 Cindy's bicycle Wheel is finished and spinning freely on its post.   There's no word yet on whether or not these will spin on their own in the wind but I'm sure we'll get a report on that when Cindy comes back in.  I never noticed that the spokes in a bike make a repeating rectangular section.  I guess it's true- You learn something new every day. 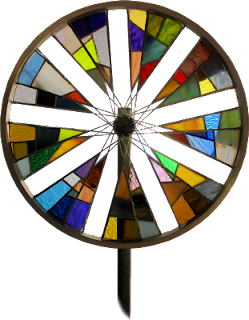 Linda L's Lamp was completed this week and it's so very elegant.  Everything about this was hand made (meaning the base as well as the lamp shade) and although the base shows off some impressive wood working abilities I do believe that it's Linda's glass lamp shade that really makes this light right up! 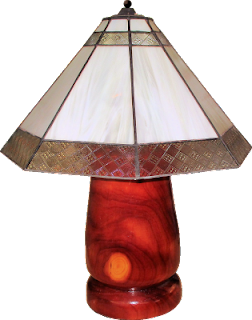 Kerry's Boy Scouts Eagle Window  is smaller than you might think (barely over a foot tall and wide) but that doesn't mean that it isn't as stunning as any larger window.  We changed up the starts from the original pattern and I have to say that they look great. 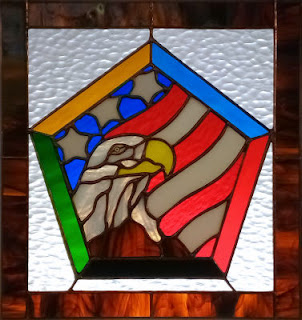 Linda finished her Campfire Bears Window and the green border really makes this hard to miss.  The nice thing is that it helps make the bears stand out by surrounding them with green.  I've said it before and I'll say it again:  This makes me think of Yogi and Boo Boo. 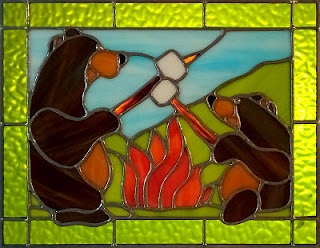 Sheri started and completed a double winged Hummingbird Suncatcher of her own.   These have become very popular in the last few weeks and will continue to be so in the weeks to come.  When they turn out looking this good it's no wonder everyone wants to make them!

Betty's 4th of July Garden Gnome Panel was completed and is officially ready for fireworks.  She has another one mapped out in her head and I don't think it will be long before she starts on the newest edition of her Garden Gnome series. 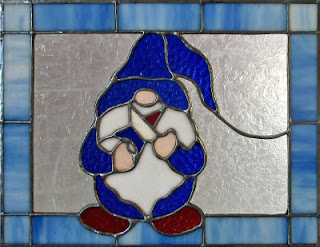 Never one to sit still for too long, Betty also finished working on two other Suncatchers.   Her Cross and her Hummingbird are both perfectly made pieces. 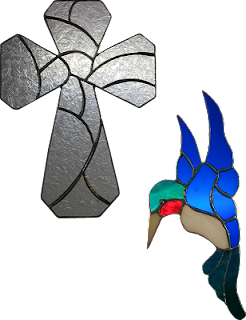 Tracey's knocked out another pair of Butterfly Lawn Ornaments and now has a slew of them decorating her yard just in time for summer.  These aren't only good for decoration-- they also make marvelous gifts! 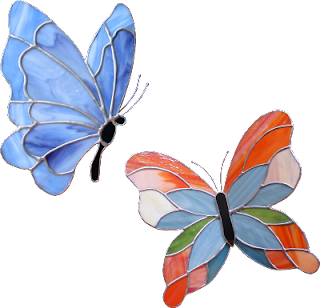 Susan D has shifted from Winter to Spring and now back to Summer.  This is the panel that she wants finished next so Spring will just have to wait a little longer before it gets any glass cut for it.  Meanwhile we get to see this delightful window unfold week by week.

Shelley has modified a Flamingo pattern that we've used in the past by making  it a little more lifelike.  she's begun cutting her glass and the color choice is absolute perfection.  She really doesn't want to section off the neck of the bird so we are going to remove the deep inside curve section with our glass saw next week.

Ann's newest Angel Hand Mirror is another project that is moving quickly through its creation phase.   She's all cut out and more that half of her has been ground already.   This will be finished before you know it!

Mary Grace resumed work on her Hoop Owl (hoop, not hoot!) which will find itself perched inside of another steel Hoop. By the time class was over with she had finished grinding on him and then moved on to the wrapping phase of this Owl's life.   He still looks like he's blind because we haven't cut the eyes into place yet but that will certainly be rectified upon Mary Graces return next week. 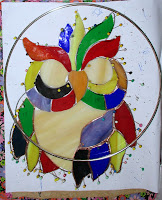 Melissa got her amber border attached to her Pair of Cardinals and has even begun soldering the front side of it.  We're going to try putting a fancier Zinc Channel around this and I cant wait to see what that will look like.  Hopefully it will happen upon her return but we never want to rush putting zinc channel on a project since it reacts so badly with the flux. 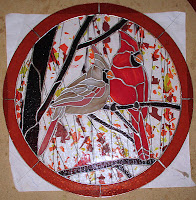 Susan R completed the leaf portion of her 3D Mini-Trellis by soldering it and attaching a zinc post to the back of it.  She's working on the 3D flowers now and once they are ground she'll tack them together and then attach them to the leaf portion of this project for a beautiful effect. 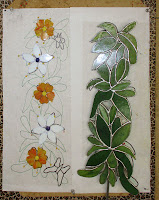 Linda's Summertime porch scene is all cut out and ready to be ground.  We aren't cutting the sky that fits behind the porch posts until everything is ground so we can keep the grain running perfectly throughout the length of the window.  That little detail adds so much to a window and if you look closely you'll see that the sky at the top of the window matches across the pattern flawlessly.

Mary's Redfish (or red drum) is another window that is moving along at an incredible rate of speed.  She's even re-cut numerous pieces out of different colors just to see which color scheme she likes best.  What you see below is what she's settled on (this week).  With just the sky left to go I know she'll be grinding this when we next see it again.

Lisa has her 3rd of four Music Insert Panels completed for her next Lantern Project.  She had two of them already placed into the lantern but I didn't want to take a picture of it until all four panels are finished and in position because I want the end result to be a surprise with a big reveal.

Bee's Cardinal has about 3 or 4 fill in pieces to go and then there's just the outer border.  I know that she's going to use clear glass for that final border and she hopes she has more of the glue chip glass she used for the background at home.  Even if she doesn't we have plenty in the shop so I have no doubt that this will gain another border when Bee comes back in. 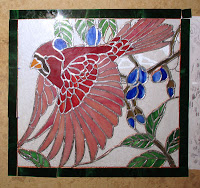 Cheryl's back and Mr. Bingle now has his first border attached.    There's only one more left to go on this and both borders will have Re-Strip buried in between them to give this window some extra added strength.  This window is nearing completion now. 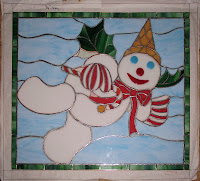 MiMi has another Cabinet insert all cut and ground.   She had some pieces left to wrap in foil when she came in but fear not because it's been taken care. 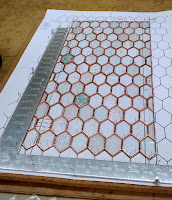 Lara's Flower Pot Window is looking incredible as she carefully chooses her colors and pays attention to their placement to provide some balance.   With the bottom half essentially cut her flowers are next in line to be cut out of glass.

Judy's got her Texas Cowboy Boots completely wrapped now which means that she'll need to pick a border color for it.  She's moved quickly and efficiently on this window even if she feels she hasn't and it's easy to see that there's quality in her work. 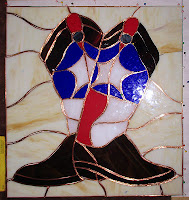 Barbara is working on another Louisiana Iris Panel, this one being done with a yellow color scheme.  She's obviously good at this because she's got this Iris all cut out and even began grinding it in just once class! 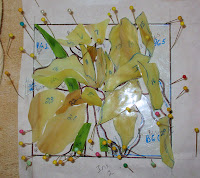 Lastly,  Betty also worked on making even more colorful Hummingbird Suncatchers.  As you can see she's well under way on three more of these cute birds. 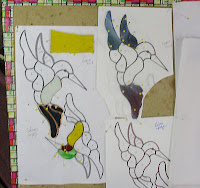